TBR: The Distance from Four Points by Margo Orlando Littell 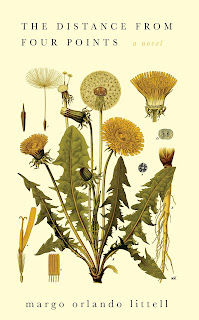 Give us your elevator pitch: what’s your book about in 2-3 sentences?
The Distance from Four Points is about an affluent suburbanite named Robin who discovers that her late husband secretly blew their savings on decrepit rentals in the Appalachian hometown she’d escaped twenty years ago. To keep herself and her teenage daughter, Haley, financially afloat, she returns to Four Points--where she risks someone exposing her past as a teenage prostitute. When Haley befriends a troubled teen mother, disaster strikes—and Robin must decide if keeping her past buried is worth the risk of repeating her life’s greatest mistakes.
Which character did you most enjoy creating? Why? And, which character gave you the most trouble, and why?
I really loved creating Cindy Sweeney, Robin’s childhood best friend. I intended for Cindy to be a minor character, a walk-on who proves to Robin just how dreadful it is to be back in her hometown. But as soon as Cindy entered the scene, she settled in for the long haul. She’s brash and foul-mouthed and spits out hard, unwelcome truths. She also has a lot to teach Robin about radical self-acceptance and loyalty. Cindy is a survivor, with no time for Robin’s fussy hand-wringing.
Writing Vincent Latimer, Robin’s old lover, was more difficult. Vincent is such a villain--he treated Robin horribly when she was a teenager, and his actions shaped the rest of her life. Yet when we meet him, he’s seventy-eight years old; he’s struggling with serious remorse and regret. I couldn’t let Robin just forgive him, but I needed to make room for other layers, both within Vincent and between him and Robin. People do terrible things to one another, go on living, change. Making Vincent human, not just the monster Robin always believed him to be, was a challenge.
Tell us a bit about the highs and lows of your book’s road to publication.
When I began agent-querying this novel, I got lots of requests for fulls but no takers. It was too character-driven, quiet, not marketable, etc. etc. This was familiar territory. My first novel, Each Vagabond by Name, also set in Appalachia, did have an agent (until she left the industry), but never got to yes when it was on sub, for all the same reasons. It was ultimately published by the University of New Orleans Press, as the winner of their inaugural Publishing Lab Prize. I could have kept querying agents with Four Points, but I felt very pragmatic about the reality of this type of book snagging any interest. Why waste time? So I approached UNO Press and submitted Four Points for consideration. I was thrilled when they accepted it, knowing already what a beautiful job they’d do with editing and design. A second book in the world, from a great small press--a happy ending.
What’s your favorite piece of writing advice?
The writing brain is a muscle that must be exercised like any other. It’s not easy to quiet the mind, focus, and access deeply creative spaces, but it gets easier with practice. When I’m actively engaged with a work, either writing or revising, I feel clearly the benefits of a daily routine: the pathways to the fictive world open more readily, and I can sink into my writing efficiently. Too long away from the work finds me distracted, frenetic, caught up in scrolling social media and running errands and crossing everything off my to-do list except the writing. When I’m following my own advice, simply the act of sitting down at my desk, lighting a candle, and opening my notebook or doc is enough to trigger the switch from life to fiction.
My favorite writing advice is “write until something surprises you.” What surprised you in the writing of this book?
I was surprised by how much my feelings toward the Four Points landlords changed. Initially, I presented the landlords as evil: letting their rental properties fall into ruin, taking money from struggling tenants with nowhere else to go. And then I inadvertently became a small-town landlord myself and found myself on the other side. My first tenant bounced all her checks and became a squatter, and it went on from there. After that, I better understood the landlords’ point of view, and why they might choose not to bother with property improvements.
How do you approach revision?
I’m not an efficient writer, so my revision process is sweeping and extensive, involving huge directional shifts and an alarming number of deleted pages. I hate writing first drafts, so when I begin something new, I just bang it out, not bothering to edit along the way. This results in a lot of plot and character decisions that eventually need to be unwound. My revision process is less marble-sculpting and more quarry-blasting.
Inquiring foodies and hungry book clubs want to know: Any food/s associated with your book? (Any recipes I might share?)
There’s a key food-focused scene in Four Points, when Cindy Sweeney brings Robin a pot of homemade halushki, an Eastern European dish made of cabbage and noodles, as a thank-you for a favor. Halushki is a definitive comfort food in southwestern Pennsylvania, and this shared meal is a surprising balm for Robin. Recipes vary, but the basic ingredients are cabbage, butter, and egg noodles or dumplings. Adding bacon is an (excellent) option too. Here’s a basic recipe from the Pittsburgh Post-Gazette, part of an article called “Halushki power!”  https://www.post-gazette.com/life/food/2015/03/11/Halushki-power/stories/201412110004

READ MORE ABOUT THIS AUTHOR: www.margoorlandolittell.com
ORDER THIS BOOK FOR YOUR OWN TBR STACK: https://www.indiebound.org/book/9781608011797
READ AN EXCERPT:  https://www.littsburgh.com/start-reading-the-distance-from-four-points-a-novel-by-margo-orlando-littell/