TBR: The Other Ones by Dave Housley 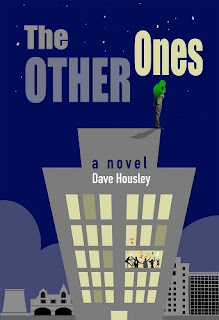 The Other Ones is a book about a group of people whose fellow office workers win the lottery. The novel follows the people who did not win (aka, the other ones), and the ways they react to this rather cataclysmic event, for better or (mostly) worse, over the course of a year.

There’s a character named after Peter Gibbons, who is the main character in the movie Office Space, and he mostly sits at his desk and works on his fantasy football team or thinks about getting another cup of coffee or what he’s going to eat for lunch. There’s a section where he’s just running through all the possible lunch options, and I think that’s my favorite part of the entire book, and really the culmination of thirty years of me working in offices. He’s just entirely a creature of the office. We never see him in any other situation and it’s only hinted at that he has a life outside of the building. I wrote him in after an agent gave me the feedback that there was too much office stuff in my office novel, so I leaned in and wrote a character who only exists in the office, at his desk and the break room. This is, also, one way to not get an agent. I love Gibbons, though, and I think he’s hopeful and wistful and I’m really rooting for him. He recites a poem by my friend, the great writer Meghan Phillips, called "Yellowshirt Elegy," which is from the point of view of one of the worker bee “yellowshirts” in Star Trek, part of which goes ”the heart of the ship, the heart of the ship, you are working in the heart of the ship.” In many ways I think Gibbons is the heart of the Other Ones ship.

Have you heard about the global pandemic? Does everybody whose books have been published in the past eighteen months say that? So that’s actually the second part. I signed a contract with Alan Squire Publishing in early March 2020, just before the last in person AWP, and then the pandemic went into full boil and two weeks after signing a contract for my office novel none of us were working in offices anymore.

Prior to that it was kind of a long road. I’ve written a lot of strange books, and I try to be honest with myself about the potential marketability of, say, a book about two old men sitting outside an abandoned factory waiting for their jobs to come back (my novella Howard and Charles at the Factory) or a book of short stories that all end in a massive cleansing fire (my collection Massive Cleansing Fire). But I thought this book was marketable. I thought it was an agent book. I remember talking to you about it, which must have been AWP 2019, and feeling like this is the one book I’ve written where there actually is an elevator pitch and it doesn’t sound ridiculous, where I don’t feel kind of like an asshole telling somebody what this book is about. So I did the agent query thing with it, and I felt somewhat confident that I might at least get some interest, and it just…didn’t happen. A few people read it and passed, for various reasons. I kept on querying and kept on getting rejected or just ignored – the agent thing is brutal, even for somebody like me who is pretty clear-eyed, I think, about the process, and has developed a thick skin about being rejected. You learn to live with the call (submission) and response (rejection), but the agent thing is more like call (query) and…just nothing. At a certain point this had gone on for months and I realized I was just blind-querying and it could go on forever – literally, I could still be doing it right now, with maybe a thousand rejections or non-responses behind me. So I turned to small/medium presses that had open calls for submission, and Alan Squire happened to be open. It had been rejected by maybe ten or so other presses by that time, and I was starting to get my head around the idea that this might just never connect with a publisher when they accepted it. They’ve been an absolute joy to work with, just really great, and they’re pushing very hard to get the word out about it, so in the long run I’m very happy with how it all played out, but like I said, it was a long and very unsure road.

I’m a big butt in the chair person. I think its just work. For me writing is like exercise – you just have to do it, there’s nothing mystical about it, just elbow grease. I think my own advice to people is that you don’t need a lot of time, you don’t need a big desk in a summer house by a lake and days stretched out in front of you to write. I write a lot on lunch breaks. I go to breakfast on the weekends and write. Last night I went and had a Manhattan by myself at a bar and wrote a thousand words. Sit down and write. The thing about driving at night is true. You can only see in front of you but you can get all the way home.

A few things. The ending kind of came together in a way that I never would have predicted. I don’t want to spoil it but a few of the pieces that I put on the table just kind of fell into place and clicked together in a way that my conscious brain never thought about at all. I don’t outline anything, and I don’t think too much about how the pieces will fit together as I’m writing a first draft, at least, which is not a terribly efficient way to write, but the only way I know how. And I remember sitting in the coffee shop writing the ending and thinking holy shit this is actually just kind of falling into place, the ghost and the guns and the gala.

That’s a teaser. That’s some marketing right there.

It was really interesting editing this book, because like I said I wrote most of it over lunch breaks while I was working in my office, and then I edited it while we were all working from home. I imagined that I was kind of skewering the office setting in general, and there’s definitely a lot of dark humor in the book, a lot of things that have annoyed me over thirty years of working in offices are in here. But the surprising thing to me was that there’s a lot of heart in there, too. There’s one character in particular who really leans into her work, and she, along with Gibbons, who sits at his desk and thinks about lunch, really became the heart of the book in a way that I didn’t see when I was writing it.

I want readers to know that this book is very much a direct result of my very real fear that I would forget to play the office lottery one week and would walk into the building to hear the sounds of celebration. This is the first scene in the book. When we were working in the office – I’m the Director of Web Strategy for Penn State Outreach and Online Education – I always played the lottery with our office group and it was 100% about that fear of missing out and the question of what would it be like if these other people actually won the lottery. It’s almost like a rapture-like event. How could you keep on going if you knew that you could have been raptured if you had only just remembered to throw a few dollars into the pot? That was always a fear of mine and it’s what the people in this book are wrestling not so gracefully with.

Mostly donuts. Offices are big on donuts. One of the things I miss about the office is the shared foods that you probably wouldn’t care about at all if they weren’t sitting there in the break room and free. Donuts and bagels and cookies.

READ MORE ABOUT THIS AUTHOR: www.housleydave.com

READ MORE ABOUT THIS PUBLISHER: https://alansquirepublishing.com/

Email ThisBlogThis!Share to TwitterShare to FacebookShare to Pinterest
Labels: Making Myself Hungry, Send Out Your Work, Sorrow, TBR [to be read], The Marketplace, This Angel on My Chest, Tough Questions, What I'm Reading, Work in Progress, Writing Tips
Newer Posts Older Posts Home
Subscribe to: Posts (Atom)