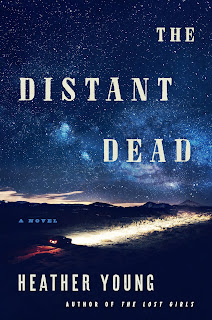 A body burns in the high desert hills. A young boy walks into a fire station, pale with the shock of a grisly discovery. A middle school teacher worries when her colleague is late to work. By day’s end, when the body is identified as new math teacher Adam Merkel, a small Nevada town will begin its reckoning with a brutal murder that will test everything it thought it knew about guilt, forgiveness, and the debts it owes its dead, both recent and distant.

The character I most enjoyed creating was Sal. The transition from childhood to adolescence is raw and perilous and heartbreaking under the best of circumstances. I love writing about young people who are working their way through that seam in their lives while facing challenges and losses that would knock even a well-evolved an adult off their footing.

The character that gave me the most trouble was Adam Merkel. The “victim” in a mystery is too often a one-note character whose purpose is mostly to be dead—i.e., to drive the plot. I had to work to bring “the dead math teacher” to three-dimensional life; to give him an emotional journey; and to render him, even in death, as a human being capable of affecting the characters who survive him.

This book’s road to publication started out brilliantly. Just after my first novel was published, my agent asked if she could send what I had of my second novel (which at the time was only four chapters) to the editor of my first. My editor hadn’t bought this book, but she had the right of first refusal, and based on those chapters she made an offer that I immediately accepted.

That’s when things got rocky, because now I had something I’d never had before: a deadline. I had to finish the book in one year, when it had taken me seven to write the first one. I didn’t make that deadline. I promised my editor I’d have it written in another year. I didn’t make that deadline, either. Another six months went by, and every day there was a small pressure cooker inside my brain hissing, “You’re late! You’re late! You’re late!”

Finally, at the beginning of 2019, my editor told me that if I hoped to be published in summer 2020, I needed to get her a draft by March 2019. I don’t think I showered for the next three months. I’m not sure I even got dressed. But I did get it done, and entered the more familiar territory of revisions with a great sigh of psychic relief.

Don’t overwrite. Gorgeous, stop-the-reader-in-her-tracks prose is most powerful when used rarely, and with great intention. (I learned this lesson painfully and have never forgotten it!)

Sal’s uncles, Gideon and Ezra. When I started writing they were barely alive; just two neglectful guardians who served mostly to make Sal miserable. It was surprising and wonderful to discover their complicated relationship and family history, and even more so to find that all of it could be used to give the ending a twist that I thought made it much more interesting.

When I revise at the macro level, I approach the text with an attitude of targeted brutality. Every scene, every moment, needs to move the plot forward or deepen character. If it does neither, I cut it. At the level of the sentence, my goal is to balance brevity and rhythm. After years spent honing legal briefs to fit within tight page limits, I know how to get the most out of the fewest words. But I’m also sensitive to the music of prose. I won’t sacrifice the patter of a sentence or the play of a paragraph just to cut a word or two.

READ MORE ABOUT THIS AUTHOR: www.heatheryoungwriter.com