TBR: This Is One Way to Dance: Essays by Sejal Shah 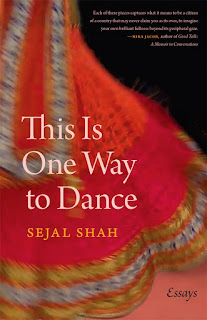 This Is One Way to Dance is my debut essay collection about language, culture, family, and place. My book explores race and belonging; growing up South Asian American; the invisibility, ambiguity, and hyper-visibility of Asian Americans; and the too-common phenomenon of having one's racialized experiences dismissed. I chronicle friendships and weddings; silence and speech; mapping one's personal geography; living with depression; and how we keep moving in the face of loss.

Which essay did you most enjoy writing? Why?

I enjoyed writing "Things People Said: An Essay in Seven Steps," because I stopped censoring myself. I was so mad—and I wrote it and sent it out the same day, which never happens! I had been stewing about stupid things people said to me about being South Asian (demonstrating the absence of basic world history and geography in American general education) for a long time and finally my husband said, You're talking your book. Write it down. And he was right. Brevity published this list essay and it led, indirectly, to my book.

And, which essay gave you the most trouble, and why?

"Saris and Sorrows" gave me the most trouble, because it felt difficult to write honestly about how I felt about my wedding. Marriage is often seen as an accomplishment, one step closer to the American Dream, and privileges what activist Mia Birdsong calls "toxic individualism, but in family-unit form"—a narrative that excludes other kinds of relationships and community. Weddings can also bring out the crazy in people. Some extended family and friends shocked me—how much they made it about themselves. I didn't write about them directly in the essay, but I found it challenging to wade back into that time of my life even though an outside reviewer had specifically requested more about my actual wedding, which I originally omitted from the manuscript. Ultimately, I took the request as an opportunity to complete another essay. An early essay in the book, "Matrimonials," begins with my brother's wedding; whether or not I chose to write about mine, weddings already populated the landscape of the book.

I fashioned a mosaic memoir in essays written over twenty years. The struggle was to create a cohesive manuscript that showed how the essays moved, mostly chronologically, but also back and forth in time—my intention was to show a narrative arc, movement over time: coming home, finding home, and making space for when life goes off the rails. I wrote about ambition, failure, and adjusting to Plan B.

High: having an editor at UGA Press's Crux Series in Literary Nonfiction (one of my favorite presses/series and a place I wanted to send my manuscript) reach out to me after reading "Things People Said" in Brevity. Valerie Boyd saw that I had a manuscript that had been a finalist at a few contests and emailed me to ask if it was still available.

Low: the time it took for my manuscript to be read by editors and peer reviewed, revised, and make its way through production. Between when I first handed in a manuscript and publishing the book, my work went through two rounds of peer review, two revisions, and I survived my grandmother's passing, moving, PTSD, my father's cancer and chemo, and the steep learning curve in publishing that is one's first book. It was a lengthy and emotional process requiring more perseverance than I could have imagined.

Keep writing. (And reading and walking!)

It surprised me that the book has so little about New York City in it, even though I lived there for several years. Writing creative nonfiction, a memoir or an essay collection, means leaving large swaths of time and life out. When you write, when you revise, a lot is left out. During those years I taught four classes most semesters in a tenure track job with a heavy committee workload. I didn't have the mental space to write much except during my leave. Then, I wrote a draft of a few of the most important essays in the book, including "Street Scene." However, "Street Scene" is about walking in Paris and my friend, LeeAnne. Though I finished the essay while living in New York City, the essay is not about New York. In 2011, the year I published "Street Scene," my friend, poet Philip White, called it a lyric essay.  I realized other essays I'd written also fit the definition of lyric essay ("Skin," "Bird," "Curriculum") Before that, I had not known that what I had been calling "prose pieces" actually belonged to a subgenre of the essay.

My friend, Jess Fenn, found my title. Originally, my book was called Things People Say (suggested by my friend, Ravi Mangla) and I loved that title, but one of my outside reviewers cautioned against it, suggesting that emphasizing other people's voices instead of my own in the title would be a misstep. I have always felt confident in finding titles for my short stories and essays, often in a phrase within the work itself, but with a manuscript, a collection of essays, it felt more fraught—harder to see which title could do the work of drawing the pieces together, creating a unified sense. Jess identified the eventual title from an earlier version of "Matrimonials," which is one of the essays in the book. It was a line I'd written long ago and lived with and it felt right; I could feel it in the body. Also, I love titles that are also sentences. My MFA thesis was called Ithaca Is Never Far.

I don't go into great detail with regards to my dance background and my history of studying dance is not explicitly addressed in the book, but dance has always been important to me as an art form and as a means of expression. The title and through line of dance worked on more than one level as metaphor, inspiration, and analogy.

Aloo chole: Chickpeas, potatoes, cumin, onions, turmeric, garam masala or red pepper sometimes; garlic and spinach often; tomatoes. Chop onions and garlic. Fry cumin seeds in oil until they start to crackle, then add onions, sauté until translucent (add a dried red pepper if you like). Then add chickpeas; if the potatoes (cut into small pieces) aren't already cooked, you can microwave them and then add. Then, garlic, spinach, and tomatoes. A tiny bit of asafoetida (hing). Salt and fresh lemon to taste.

READ MORE ABOUT THIS AUTHOR: www.sejal-shah.com