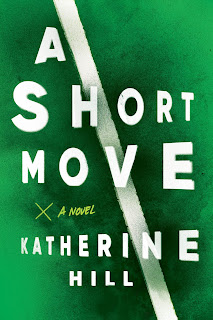 A Short Move is the life narrative of an NFL linebacker, relayed in discrete episodes via multiple perspectives. Think A Visit from the Goon Squad meets Friday Night Lights.

It’s Mitch’s book, so the answer has to be him—both in terms of enjoyment and in terms of difficulty. I first met him in a short story as Alyssa’s dad, the retired NFL player. He was a minor character in that story, but I became interested in him because I felt connected to him in spite of the fact that he’s so completely unlike me: culturally conservative, physically strong, a man. He also peaks around thirty, when I was just getting started. I wanted to figure him out, so I wrote an episode about him as a teenager, and then I just kept going, coming at him from all sorts of angles. I knew pretty quickly that I had a novel and that it wasn’t going to be a traditional sports novel, in which big games are the main events. The main event was Mitch himself, and the formation of his identity. I’m one of those readers who loves art for what it leaves out—the negative space, the off-stage action, the gaps. Mitch, who sublimates everything, gave me so much to work with in that department.

It was a pretty typical road, by which I mean really, really tough. Not only did I insist on writing a literary novel about a football player, a notorious mismatch of categories, I also insisted on writing it in a form that resists most commercial expectations. Needless to say, it got turned down. A lot. At first it was perversely satisfying, even thrilling, to feel so overlooked and misunderstood. Then the deep depression set in. I believed in the book, fiercely, and I had devoted six years of my life to it, putting a lot of other things on hold. I knew it was better than my first book, which so many people claimed to love, and I knew the risky subject matter and weird form were the most interesting things about it. So while I never lost faith in the novel, I lost faith in the world I lived and worked in, which is almost worse. Thankfully, Robert Lasner and Elizabeth Clementson of Ig came along just in time. They loved the book I had written, and they were ready to put all of their energy into it, which was all I’d ever wanted in a publisher. I feel so grateful to have found them.

Trust the process. When I think of fiction writing as a practice rather than a means to an end, all sorts of problems are solved. It becomes impossible to waste time. Failure is ordinary. There’s no such thing as a finish line. I’m embarrassed to admit I’ve only recently come to view my work this way. I used to be a lot more instrumental—I wanted to be paid, and I wanted to be respected—and this caused me considerable pain. Of course certain basic needs have to be met. You have to pay the bills, and you have to have fellow travelers. But when I approach writing as its own reason, the end in itself, I’m so much happier, and my work is better, too.

I know I am always somehow writing about life under capitalism. But when I started this book, I thought I was just writing about a football player. Turned out his life was a quintessential life under capitalism, booms, busts, chains, and all. So my surprise was actually the surprise of verification and connection. Like, oh, here’s this thing I’ve always known was true—and it still is!

My husband once heard Cornel West give a lecture in which he said something about life being a short move from your mother’s womb to your final tomb. I just absolutely loved that phrase, especially when I thought about football, a game of short, discrete moves.

There’s a very important sheet cake in Chapter 6. You now have permission to purchase a sheet cake. You’re welcome.

READ MORE ABOUT THIS AUTHOR: https://www.katherine-hill.com/a-short-move.html

READ MORE ABOUT THIS PUBLISHER: https://www.igpub.com/a-short-move/

READ AN EXCERPT OF THIS BOOK:  https://www.thecommononline.org/draft-day/