TBR: Tea by the Sea by Donna Hemans 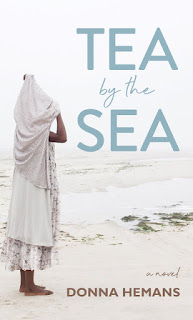 To find the daughter taken from her, Plum Valentine must find the child’s father who walked out of a hospital with the day-old baby girl without explanation. Seventeen years later, weary of her unfruitful search, Plum sees an article in a community newspaper with a photo of the man for whom she has spent half her life searching. He has become an Episcopal priest and she has a plan to confront him and walk away with the daughter he took from her.

Plum was the first character I began writing and the one I enjoyed creating the most. When I start writing a book, I usually don’t know where the story is headed. The very first section of the book I wrote showed Plum getting her daughters ready for school. There’s a litany of tasks she completes in the morning before walking her girls to school and heading to work. But instead of going to work, she takes a detour to a church and I had to figure out why.

A few weeks later, while in Jamaica, I heard a radio program in which listeners call in to reconnect with others with whom they had lost touch. On that night, a mother trying to find her young son called in. She knew the father had taken the child but didn’t know where the father and son had gone. Once I heard her plea, I said “That’s my story.” So I enjoyed the process of taking what little I heard about a mother’s search for a lost child and building a novel with a mother facing a similar search.

Surprisingly, the character who gave me the most trouble was Opal, Plum’s daughter. I wanted to write a portion of the book in her perspective, but it didn’t quite work as I expected. Eventually, I figured that it wasn’t Opal’s story to tell, and readers would learn everything about her from her parents.

I published my first novel, River Woman, in 2002 and now my second in 2020. That’s a long time between books. Between River Woman and Tea by the Sea, I wrote two other novels that I am currently revising. So it was refreshing to find the story and the structure for Tea by the Sea and to work on a book that seemed to flow much more easily than the previous two I had been working on.

Read. Read books you like and books you don’t like and pay attention, not only to the story itself, but to how the writer puts a book together—everything from paragraph breaks and dialogue tags to how a writer uses flashback and moves back to the present moment of a story. Pay attention to what works and what doesn’t and why. So much of what I have learned about writing has come in these informal moments when I am alone with a book.

The setting in Anchovy, which happens to be where my father grew up. The house that Lenworth takes as his refuge is my grandparents’ house. As I wrote, I remembered more and more about the house and its quirks, running down the little hill by the side of the house, the cherry tree that had once been there, a doll my sisters and I found and took home. As I remembered each detail, I found a way to incorporate them.

I tend to revise as I write. I usually start out with a character or a setting and a vague idea of what a book is about and where I want to go with it. The story and the characters unfold as I write, and I move back and forth throughout the manuscript tightening scenes and building characters. When I have a substantial amount written and I understand the full arc of the story, I start rereading to fill plot holes, build characters and add texture. So revision for me is an ongoing process.

Given the title, teas, of course. Plum has a thing for teas and as a student at a boarding school, she longed to have teas made with fruit peel. She talks, too, about sorrel tea. Sorrel, also called hibiscus, is the traditional Jamaican Christmas drink. That version is typically served cold and with a dash of rum. But I also like it as a hot tea with ginger.

Wash sorrel thoroughly and put it into a stainless steel container.
Scrape and grate the ginger root and add to the sorrel. Add pimento grains.
Boil water and pour over sorrel.
Allow to stand 4-6 hours. Strain.
Sweeten and add rum to taste.
Serve with ice cubes.

READ MORE ABOUT THIS AUTHOR: www.donnahemans.com

ORDER THIS BOOK FOR YOUR OWN TBR STACK:
https://redhenpress.org/products/tea-by-the-sea-by-donna-hemans