TBR: Jesus in the Trailer by Andrew K. Clark 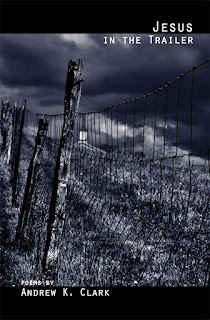 Above all else the poetry in Jesus in the Trailer evokes a cogent sense of place.  Whether addressing police violence on the cobblestone streets of Savannah, the loss of a loved one to dementia, or coming of age in a trailer park in Appalachia, my poems address matters of faith, death, love, lust, and the beauty of the natural world, while not masking the pain of Southern history.

I think the book breaks boundaries with regards to how modern society thinks about religion, particularly the notion of the “gospel of prosperity” in modern Christianity.  This is the idea that those who are God-like are blessed with wealth and success, and that if you are not blessed those with things then you must not be sufficiently pious or religious.  The title itself tries to decry this with the idea of Jesus appearing in a trailer park.  I think the best poetry from this collection emerged when I allowed myself to write about religion and hypocrisy without holding back.

I begin submitting the manuscript in late 2017, after workshopping most of the poems with multiple writer friends and mentors.  I had several cases where I was a semi-finalist in a contest, or notes from publishers suggesting that I was “close” to ready.  All the while I kept writing new poems, revising the manuscript, trying to focus on the order of the poems, and replacing weaker poems.  I received word at the end of 2018 that Mainstreet Rag was interested in publishing the book.  I had another publisher interested at the same time, which is often the case, and went with MSR based on their long-running reputation in the poetry world.

Of course we all know that to write well we need to read – a lot.  But one of my writing mentors suggested when I was in the midst of a fiction manuscript, to read tons of poetry; if writing poetry, read lots of fiction.  I don’t know why, but it really works well for me, seeming to fire something different in my brain when I need it.

I was surprised by how often religious themes came up in my writing, way back before I had a title. I was raised in a conservative religious tradition, a world of tent revivals and camp meetings, but it wasn’t what I wanted to write about necessarily.  Something opened up for me when I just allowed myself to go there.  I also was surprised that I could write love poems that were readable and popular at readings (the cynic in me didn’t think poems about love could be “good”).

In deciding on a title, I asked my critique partners and mentors which titles they liked of maybe a half dozen. Over and over, folks preferred Jesus in the Trailer to the other options.  I felt some of the other poems actually represented the body of work better than the title poem, but it does capture several of the book’s themes well.

Food doesn’t come up a lot in the book, but one poem talks about my ninny’s biscuits and cornbread.  I don’t have any recipes, but if you make gravy for your homemade biscuits it must be with white flour, bacon grease and whole milk (along with water, salt and pepper).  I know there are other gravies, but you really shouldn’t let them anywhere near a biscuit if you have any self-respect.

READ MORE ABOUT THIS AUTHOR:  http://www.andrewkclark.com

ORDER THIS BOOK FOR YOUR OWN TBR STACK:  http://mainstreetragbookstore.com/product/jesus-in-the-trailer-andrew-k-clark/

READ SOME POEMS FROM THIS COLLECTION: https://www.andrewkclark.com/writing