TBR: All My People Are Elegies by Sean Thomas Dougherty 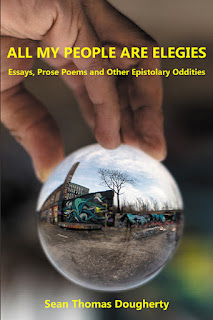 After a furious series of rejections from dozens of literary magazines, I spontaneously decided to write back to them.  I improvised in real time epistolary public responses on Facebook over a six-month period that began Dear Editor. But this book is less about the literary arts than it is about how we use language to separate or join us, it invites the reader in to participate in my life and my family, in my work as a caregiver, about alcoholism, working class bars, neighborhoods, gun violence, and the world of people struggling to live in the cities and towns along Lake Erie and then some.

Honestly this was my favorite book I ever wrote because the writing itself was a kind of performance in real time witnessed by a live audience over months.  I drafted each of these in the little Facebook box.   Has anyone written a book that way?  I mean Patricia Lockwood wrote her poems on Twitter.  Someone must have written a book on Facebook.  As a former performance poet, I loved this sort of anticipatory live audience. Once I started the project, my friends on Facebook urged me on.  They were incredible.  People also started to participate by posting their own rejections and tagging me.  The project created a sort of community of failure where we all shared and by doing so kept writing and going forward.  Social media can be so negative and back-biting, but for someone like me who lives far from any big literary center, it is a way to participate and make positive communities.  The book crisscrosses various prose genres of the essay, letter, and prose poem, sometimes in the same piece.

Honestly, that anybody thought these pieces were anything at first.  I was just performing.  I was clowning.  But often in writing, when we are wearing masks or engaging in a kind of maquillage, it gives us the distance and temperament and then permission to open and dive into our deepest wounds.  For me the Dear Editor, the epistolary letter quality of responding to editors real and imagined, created in me a tone part priestly confessional, part therapy, part Al-Anon group meeting.  To speak to and for and back to this authority figure took me places I never thought I would write or imagine, particularly the pieces about my own family or about the murder of my friend young Jose Rosario.

It may have been Al Maginnes, it was someone on Facebook—more evidence of the collaborative nature of this project, who pointed out the line to me in one of the pieces one night as a good title .  The title I think speaks to so many of us who are working folks, who deal with issues of health and aging.  Eventually you reach a point later in life where the elegies outnumber the odes.   Where your dead friends outnumber your living ones.

I want them to know they aren’t alone as writers, as people.  We are all out there struggling everyday to live decent lives of hope and honor, we fail everyday together.  And that is something, something to hold on to, and lean on each other, as citizens, as artists, as people.  My readers are my people.

Pierogi are the preferred food.  This book deals a lot with alcoholism.  Ironically a good bourbon or Vodka is probably best to appreciate it.  Pour a little out for our brothers and sisters gone before you read it.

READ MORE ABOUT THIS AUTHOR: www.seanthomasdoughertypoet.com

READ MORE ABOUT THIS BOOK: https://books.nyq.org/title/all-my-people-are-elegies

ORDER THIS BOOK FOR YOUR OWN TBR PILE: https://books.nyq.org/title/all-my-people-are-elegies