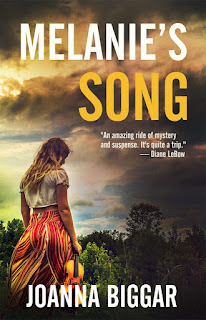 The five women who traveled together to Paris in the 1960’s—whose story was told in That Paris Year—retain a close bond although they have gone their separate ways. Now it is 1974--the era of Watergate, Viet Nam, and post-Woodstock—and the narrator, J.J. who has become a journalist, realizes one among them is missing. The search for Melanie sweeps from hippie communes to high society, the California coast to Africa and the South of the Civil Rights Movement, always accompanied by the soundtrack of the times. The quest becomes not just to find where Melanie is, but who she is.

The most enjoyable character to create was the central character, Melanie. She was a creative challenge because she does not actually appear in the book, so exists through letters, journals, newspaper articles and the impressions of others. Also, she becomes increasingly complex and elusive, hence remains at the heart of this mystery. The most difficult character to create was the old-time hippie Moon. I did not want him to be a caricature but to still keep his blowhard attitude as he revealed himself to be very different from how he first appeared.

This is a seldom-told tale, but with Alan Squire as my publishers, it was actually a joy. They had published the first book in what will be a trilogy, and were committed to the project. Working with Rose Solari and James J. Patterson is a writer’s dream. Like iconic editors from the past (think Maxwell Perkins), they are dedicated to developing a writer over time, and from book design to editing to promotion, their team is first-rate.

I’ll stick with the wisdom of my favorite book about writing, Annie Lamott’s Bird by Bird in which she praises the completion of “the shitty first draft.” At the beginning of a project, it’s so important to get your aspirations down on paper and not freeze up by over-editing yourself and strangling your baby before it’s born.

The narrator, J.J., in the first book dedicated herself to finding out the truth about her friends. In Melanie’s Song, she continues on the quest for truth using the tools of a journalist. But she discovers that “the facts” never tell the whole story, that the truth is ever-changing, and only by accepting that can she—can anyone—really grow.

There are meals and wine throughout the book (this is California after all), but the most memorable meal is Thanksgiving dinner at Gran’s old house in Pasadena.

Recipe for a 10 lb. bird
Add melted butter/milk to stuffing mix. Then add the other ingredients. Make a day ahead, adjust  seasoning and butter/milk for right degree of moisture.
Add butter to cleaned cavity of bird, then stuff, tress and bake according to instructions. If there is stuffing left out of the bird, put in covered casserole and bake for last hour or so of cooking time.

****
READ MORE ABOUT THIS BOOK: https://alansquirepublishing.com/book-authors/joanna-biggar/

ORDER THIS BOOK FOR YOUR TBR STACK: https://alansquirepublishing.com/bookstore/melanies-song/