TBR: Holding On to Nothing by Elizabeth Chiles Shelburne

TBR [to be read] is a semi-regular, invitation-only interview series with authors of newly released/forthcoming, interesting books who will tell us about their new work as well as offer tips on writing and stories about the publishing biz, and from time to time, share a recipe! 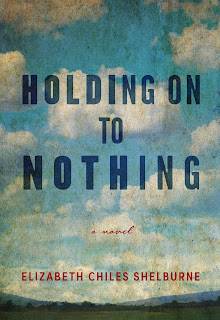 In rural East Tennessee, Lucy Kilgore has her bags packed to leave, but a drunken mistake tethers her to her hometown and to the notorious Jeptha Taylor, who becomes the father of her child and the source of love and sorrow in an unsentimental tale of love, liquor, music, and redemption.

While Jeptha was always a character in the story (from the beginning, I knew his role in one central event in the book), in my first couple drafts he appeared only in Lucy’s backstory. He wasn’t in any scenes, much less as a protagonist. But thanks to my classmates in the Novel Incubator at Grub Street, I came to realize how much I cared about him, as awful as he can be, and how much he needed to be in this story. He is a very loveable loser, with a few redeeming traits, and it was fun to write a character who should be unlikeable, but ultimately isn’t.

Lucy was sometimes a challenge to work on. She is a bit of a cypher (her mom, who was cut from early drafts, was too) and it was sometimes hard to get her emotions on the page. She’s a strong character, but one who keeps her own counsel, and so I had to work hard to make sure she didn’t come across as lacking in agency.

How long do I have?! I’ve been working on this book for many, many years—in between jobs; the carrying, having, and rearing of four children; and those low moments as a writer when you wonder if it’s even worth continuing. So it’s been a long road. I’ve lost track of the number of drafts, but definitely more than twenty. I had the extreme honor of getting into Grub Street’s Novel Incubator back in 2013 and that really changed this book for the better, but I still had a lot of work to do (and three more kids to have) before I submitted to an agent. I got an agent through Muse and the Marketplace, and we went on submission in July 2017. She thought it would sell in the first round. We got the best rejections you could get, but we couldn’t find a publisher. It didn’t sell in the second round. Or the third. Finally, just when we were about to hang up the towel and stop submitting, it landed with Robin Miura at Blair in January of 2019. She snapped it up immediately, and it’s coming out 9 months after our first conversation!

“Don’t write, type.” This advice from Robert Gottlieb, editor to Toni Morrison, Joseph Heller and Robert Caro, among many others, has saved my writing more times than I can count.  I can get hung up both on needing the work to be perfect the first time and on finding the perfect time or circumstances to write. I love this advice because there is no need for perfection if I’m just moving my fingers. If something great comes out, then excellent. If not, no worries—all I did was exercise my hands for a while.

In the beginning, LouEllen was a purely good character, sort of a Fairy Godmother for Lucy. But as I started to get to know her, I was surprised to realize how complicated she is and how that would make Lucy’s life harder. She loves Lucy, but not purely, by which I mean, she has her own reasons for doing what she does. I loved discovering how the relationship that evolves from putting these two complex women together really helps drives the novel.

The original title of the book was Little Sparrow, after a Dolly Parton song. But my amazing editor and publisher, Robin Miura and Lynn York, felt that it didn’t quite capture both Jeptha and Lucy’s viewpoints. But they loved the idea of a hat tip to Dolly, who is from East Tennessee, and features in the book (because she is amazing!). We went out in search of other Dolly songs – there is basically one for every emotion that’s ever flickered through your brain – and found Holding On to Nothing, which perfectly describes Lucy and Jeptha’s journeys.

I love to eat, so this is such an embarrassing admission, but there is almost no food in my book. (People are drinking on almost every page, though, so I got you covered on beer recommendations!) One of my very favorite characters, Delnor Gilliam, turns up in Lucy’s Walmart checkout line one day buying a cantaloupe, Cheetos and Sunkist. But you’d be hard pressed to turn that into a recipe! Otherwise, and this is not a recipe, but after the worst of her morning sickness has passed, Lucy eats a big plate of scrambled eggs studded with huge chunks of cheese. That, and heavily buttered toast, is comfort food for me, and something I will always associate both with being pregnant and those voraciously hungry weeks right after giving birth.

READ MORE ABOUT THIS AUTHOR: www.ecshelburne.com

ORDER THIS BOOK FOR YOUR OWN TBR STACK: http://ecshelburne.com/fiction/

READ A CHAPTER FROM THIS BOOK, "Some Things Lost; Nothing Gained": https://barrenmagazine.com/some-things-lost-nothing-gained/