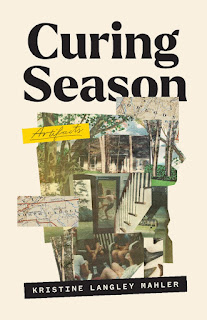 A coming-of-age book for everyone who came of age anywhere but home, Kristine Langley Mahler’s debut essay collection, Curing Season, pries apart the cracks of inclusion to experiment with the nature of belonging, memory, and place. After four years of adolescence in Pitt County, North Carolina, Mahler is still buffeted by the cultural differences between her pioneer-like upbringing in Oregon and the settled Southern traditions into which she could not assimilate. That yearning remains buried like a splinter as Mahler carefully tweezes out the artifacts of her adolescence, placing them beside the history of eastern North Carolina to study the narratives that have defined them both, trying to make room for outsiders in a place so old, million-year-old Megalodon shark teeth erupt from the creek beds every spring.

I really appreciate the opportunity to reflect upon which essay I most enjoyed writing—as a memoirist, I think it’s a given that memoirists all know we’re spelunking through the uncomfortable and often hard-to-face memories when we write, and I think that it can be easy to lose sight of the joy produced during that writing—not just the joy of re-surviving the moments, but the joy of playing with the text. Playing with the memories. Being delighted by the little details we almost forgot. At least it was that way for me as I wrote “Club Pines,” an essay framed into the houses of the girls from my old neighborhood. There were so many of them! I had to pull up a Google Maps image of my neighborhood and proceed down each street, reminding myself who had lived where, and I was startled to realize how many houses I actually had been inside. Once I’d identified them all, I metaphorically sat inside the girls’ old houses and free-wrote about what came to mind—what I still remembered after all these years (and it’s been about 25 years!). The details that trickled out were the emblems of how I had chosen to remember each girl. I actually laughed out loud when remembering certain details, wryly rolled my eyes at others, and yes—because it was inevitable—averted my eyes at the uncomfortable ones. But those emblems—those emblematic moments I could immediately recall upon simply seeing the fronts of their Google-Imaged houses—all taught me how I had viewed belonging and friendship, and recording the specificities of those girls and their houses and their friendships filled me with so much joy. It was always the details I collected like an adolescent magpie which had meant so much when I was a girl; it was always those details that satisfied my internal questions about whether I knew enough to belong.

Which essay gave me the most trouble? Let’s just say “A Pit Is Removed, A Hollow Remains” because as I was writing it, I kept thinking, “Am I allowed to do this? Can I really collage and modify this book of family histories? Are the citizens of Pitt County going to come for me?” Well, one way or another, I did it anyway!

I thought Curing Season was a different book! I had written an essay collection, originally titled Pull Me Through the Doorway, which was all about home and belonging. But I spent the summer of 2020 taking the old book apart and bringing together a large subcurrent: the essays about my adolescence in Pitt County, North Carolina. That fall, I tried pitching agents to no avail—kind of funny now, since this book is so clearly not an agent-style book. Once those pitches all failed, I steeled my courage and sent a query for Curing Season to the In Place imprint at West Virginia University Press—an imprint I had long-since held on my shelf as a dream press because their focus on books about place was EXACTLY my jam. In December 2020, WVU let me know they wanted to send my book out to be peer reviewed and would make a decision on whether they wanted to offer based on the feedback. I held my breath and in late February 2021, WVU Press shared the extraordinarily kind (and insightful!) peer reviews and made me an offer! Honestly, the way the reviewers saw Curing Season—the way they wrote about it, the way they understood it—made the decision extremely easy. If WVU Press could read and want my book after knowing how it was seen and understood by others, I knew they would know how to support it. I’m still on cloud 9!

Save it. Save all of it. Save the scraps you edit out because they don’t belong in a piece and use them as jumping-off points later, even if it’s just to keep yourself writing—I often reuse them as prompts to go deeper.

I was surprised by how many formal structures I ended up using in the essays within Curing Season. Subtitles and constrained forms, boxes and boxes scaffolding essays. I was surprised to discover that so many of these essays about Pitt County and my adolescence seemed to have REQUIRED me to use alternate forms to approach the subject matter. I wrote most of the essays in this book over a period of roughly five years (if I discount “Not Something That’s Gone,” which I worked on for twenty years) and didn’t know they were building toward something; to see the essays together, written into all these various constraints, revealed something to me that I hadn’t seen before: how much I both wanted to create structure out of that time and how much I felt constrained by the cultural structures I didn’t build!

The title of Curing Season comes from a particular process for curing tobacco—eastern North Carolina is famous for growing tobacco, but also for its flue-curing process, which happens after the tobacco has been cut. The tobacco is hung in sheaves to dry, which are then tied to poles which are laid across the eaves of curing barns. A low fire is stoked and its heat is fed into the barn. It only takes about a week, nowadays, to complete the curing process of turning picked-tobacco into cigarette-ready tobacco. Those curing barns—or “curing shacks,” as I call them in the book, are some of my most vivid memories from driving around rural Pitt County with my family on Sundays after church. In my mind’s eye, almost none of the curing barns were still whole or being used. They were eaten alive by vines, by trees, by time, boards falling off and roofs caving in. The curing process and the curing shacks became emblems for me of what it took to belong to Pitt County—the shacks might be broken, they might be in disrepair, but the curing season itself spoke to the knowledge that something grown could be turned into something desirable. If it could stand the heat. If it could be cured. The metaphor wrote itself.

Lord, y’all can look for food in this book but I’ve got nothing other than Moon Pies and sweet tea to offer you. 4 bags of Luzianne steeping in 32oz of hot water for 3.5 minutes; stir in 1/3 C of sugar and ¼ C of lemon juice. But I prefer the old Nestea powder.

READ MORE ABOUT THIS AUTHOR:

READ AN ESSAY, “Out Line”:
https://www.speculativenonfiction.org/contributions/2020/12/12/out-line-a-proposal-that-wont-be-accepted