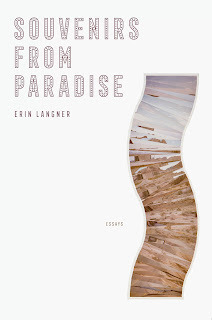 My mother died unexpectedly of breast cancer when I was nine years old. But it was only after traveling to the Las Vegas Strip obsessively when I was in my late 20s that I began to understand my grief surrounding that loss and what it’s meant to turn away from it for so long. This is the experience that I unpack in Souvenirs from Paradise, a collection of essays that use the tropes of the Strip—the themed mega-casinos, the impersonator shows, the Mafia history—to unearth the buried emotions that were driving my attraction to this strange place all along.

An essay called “The Tourist Guide” was the most fun and also one that I struggled with writing. It plays with the language and style of travel guides, particularly the New York Times “36 Hours” column. People often ask me for travel advice when going to Vegas, so some of the inspiration came from that—but also from asking myself, what would a travel guide look like if I were to write it for this particular book?

Travel guides often write from a removed voice in the second person and purport to reveal some kind of insider knowledge, even though they often recommend well-treaded activities and places. My challenge was to find a way to use that language and voice to understand my own “sightseeing” path while avoiding cliched writing on Las Vegas, which I did by considering the details of particular casinos that held meaning for me. I also pushed myself to interrogate how my grief made its way into my experiences with those details. Ultimately, I asked myself, what can “sightseeing” itself can really mean—how can it help us understand not just a place, but ourselves.

I knew from the beginning that the path to publication would be long because I was working on a collection of essays—I had many people warn me that essay collections are difficult to sell. But this is the writing form I most connect with, and so I committed to it with that reality in mind. A long process is fortunate in that it led me to connect with many people in the writing community over the years—our local writing center in Seattle Hugo House, various summer writing workshops that I participated in around the country, a writing group that formed out of one of those workshops in 2015 and continues today. I began reaching out to some agents in 2018 and did some substantial revisions after a few read the full manuscript but declined representation.

I tried reaching out to agents again in 2019, but once the pandemic hit in 2020 and everything felt so chaotic, I struggled to communicate the urgency of a book in query letters. So, I started turning more towards small presses that didn’t require agents. I submitted to some contests, and was once the runner-up, which was a disappointment since only the winner received publication. But it did encourage me to keep submitting, and I was eventually fortunate to have the manuscript selected for Zone 3 Press’s 2021 Creative Nonfiction Book Award by judge Wendy S. Walters.

I once heard Zadie Smith speak about the way she avoids social media and instead uses those precious minutes when people often scroll through their phones to instead write. While I don’t succeed as often as I’d like, it’s something I strive towards when I find a few idle moments.

When I began writing this book, I thought it was about an obsession with Las Vegas. I didn’t think it was about grief, and vehemently denied that it was for about a year, until I realized that the threads about that aspect of myself were the ones my readers were connecting with most.

The title was originally an essay title that changed during the revision process (now called “The Rat Pack Casino”).  The cohesion of the collection was important to me, so when I was organizing the book, I went back to an idea I had very early on, when I thought about anchoring each essay in an aspect of the Strip that people often associate with Las Vegas. Once time had allowed me to distance myself from the material, I recognized I had just turned those Vegas tropes on their heads in ways that had been unrecognizable while I was mining my experiences with grief. They had there been with me all along, and so I retitled all of the essays in order to surface the tropes more clearly for the reader—“The Mirage”, “The Bachelorette Party”, and so on. “Souvenirs from Paradise” was a title I hated to give up. But, I considered how the tropes became my own “souvenirs” of both my time in Vegas and the writing process. It felt like this idea could be applied to the whole collection.

“Paradise” also felt right for its meanings, as an abstract concept that can transform into different places at different points in our lives. But it also very concretely references the Strip’s location, which is technically in Paradise, Nevada.

The buffet is one of the most quintessential experiences on the Strip, in my opinion.  My favorite is the Bacchanal Buffet at Caesars Palace.

READ MORE ABOUT THIS AUTHOR: www.erinlangner.com

ORDER THIS BOOK FOR YOUR OWN TBR STACK: https://epay.apsu.edu/C20023_ustores/web/product_detail.jsp?PRODUCTID=940