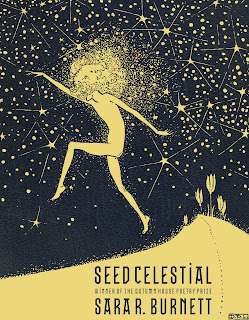 Seed Celestial covers topics from climate change, women's issues, immigration, and gun violence, and it does it, I hope, with humility and compassion. Through the mother-daughter relationship, this book celebrates the wonders and the journey of bringing children into this world even as it grapples with its increasing disorder and disconnect. I think it encompasses a lot of what many of us are feeling right now – anxiety, uncertainty, and awe in our moment.

I think I most enjoyed writing Cherchez la Femme and the Demeter poems. I remember clearly writing Cherchez la Femme because I was so full of anger and outrage at the Brett Kavanaugh confirmation hearing.  I remember texting with a friend who told me the history of the phrase “cherchez la femme” and its meaning (find the woman). I had recently finished reading Terrence Hayes’s American Sonnets for my Past and Future Assassin. There’s a poem in that collection that begins with the line “But there never was a black male hysteria” and it’s just genius, that poem, the way it sheds light on systematic racism. It wasn’t a huge leap from there to think about that line in terms of systematic sexism. Because I had limited hour to two of childcare, I wrote the poem Cherchez la Femme quickly at a crowded, communal table at the library, and it was one of those rare moments for me where a number of things could have been happening around me, but I would have been oblivious to it. It felt so good to channel my anger into something. I also enjoyed writing the Demeter poems and those came easily for me as well. I’ve loved the myth of Demeter and Persephone since I read it in fourth grade. It felt very natural for me to apply that myth, which was how the seasons were explained in ancient times, to climate change. What if climate change was the ultimate revolt of Mother Nature against her children? And since it’s a mother speaking, it would have to be complicated. It would be a series.

And which poem/s gave you the most trouble, and why?

The poem that gave me the most trouble was Ethnic Arithmetic. It’s a contrapuntal poem (meant to be read three ways) and it was Afaa Michael Weaver at Bread Loaf who suggested that I put the original poem into that form. I wrote several attempts before I got it to where I wanted it.

This is my second earnest try at a manuscript. I had one a few years back that I sent out. I even got an acceptance for it, but it wasn't a good deal for me as the writer, and now I'm really glad I didn't publish then because only a few of those poems are still in the current manuscript.

Of this manuscript, Seed Celestial, I sent it out 68 times and was rejected over 40 times. (There are still some presses/prizes I haven't heard back from). At one point shortly before it got picked up for publication, I had a professional editor, Wyn Cooper, look at it mostly for that boost in self confidence that I needed to send it out. He gave me the "ok, good to go", a much-valued pep talk, and encouraged me to keep sending it out knowing the sobering mathematical odds of publishing a poetry book. But he had confidence and that helped me to keep at it.

When you get stuck, read.

Maybe the question is who surprised me. I think Lucretius surprised me. Lucretius’s De Rerum Natura provides the structure for the manuscript. I had read it in graduate school in my MFA program at the University of Maryland and loved it, but I don’t want to give the false impression that I have time with 2 kids under 5 to often dwell on ancient texts. It must’ve always been in my head and while I was struggling to order the manuscript, something nudged me to get the book off the shelf and re-read it. I did, and when I came back to the manuscript, there were key words from my highlights of Lucretius like seed, earth, animal, mother, and celestial that began to impose a shape on the poems. I wrote them on post-it notes and collected the sections. I debated many times about whether or not to include the quotes from Lucretius to open each of the 5 sections and I’m so glad I kept them in. All of this was practically and logistically very hard to do while 8 months pregnant with my second child and carrying for my then 2-year-old. The self-imposed deadline for putting the manuscript together was my son’s due date.

I wanted this book to be artistic, formally dexterous, and accessible. It’s important to me that people who don’t normally read poetry might be introduced to this book. I hope it resonates with readers of all types. The world can use more poetry.  I think it can speak across political divides to what unites us and we need more of that now.

I think any delicious Cuban food would be appropriate when reading this book.

READ MORE ABOUT THIS AUTHOR: https://www.sararburnett.com/

ORDER THIS BOOK FOR YOUR OWN TBR STACK:  https://www.autumnhouse.org/books/seed-celestial/

READ A POEM FROM THIS BOOK, “Cherchez la Femme”: