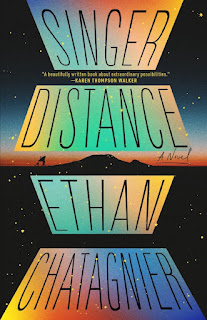 In 1960, Rick Hayworth sets out on a quest with his genius girlfriend Crystal Singer to display a giant mathematical equation in Arizona. It’s been thirty years since someone solved one of the proofs a Martian civilization carved into its surface, but Crystal believes she’s resolved its paradoxical contentions about distance. The book is part quest, part epic love story, and a meditation on the distances between planets and the distances between people.

Lucas Holladay is a minor character in the book, but was an absolute joy to write. I think of him as a low-rent Carl Sagan—Sagan’s talents as a communicator without his scientific bona fides. There was a real sense of play to writing his sections, and it was a joy working to inhabit that Sagan-esque sense of wonder. Rhea, a character from late in the book, was the most difficult to write. I’ll have to be a bit vague to avoid spoilers, but she could be neither too cynical or too optimistic, too open or too closed down, without throwing out the direction of the plot, so it was a challenge giving the right amount of personality to a character that needed to inhabit a middle ground.

Being on submission (when an agent shops the manuscript out to editors) was very psychologically difficult, as it is for many writers. You only need one more yes to know your book will be published, but you don’t know when that yes will happen. You don’t know if it will happen. The dream could die right there on the doorstep. SINGER DISTANCE was on sub for about four months, which is probably average in the scheme of things but felt endless and was full of wild swings from hope to despair.

One of the biggest highs has been the response from my blurbers. The whole blurbing process is known for being fraught, but my editor hustled very hard to get the book in the hands of the perfect early readers, and they connected with the book more strongly than I ever hoped. They got exactly what I was going for. It feels miraculous for any reader to receive your book exactly as you intended, and when they’re also writers you deeply admire—well, it's mind-blowing.

I love Blair Hurley’s advice about “touching the bear” from a Lit Hub essay, which is essentially about finding the wild, unexpected turns that drive a story into more intense terrain. She wrote about story draft she’d ended with a character sadly watching a bear meander by, and how much electricity and pressure was invoked when she asked the dangerous question, “what if he tried to touch the bear?”

For logistical reasons, I had my characters’ road trip ending near Flagstaff, Arizona. It was only when I got to those scenes that I discovered in my research that Flagstaff is the home of Lowell Observatory, which was founded by Percival Lowell. Lowell was one of the biggest advocates behind early the 20th Century theories of an inhabited Mars that inspired the novel, so that set off all kinds of unexpected resonances and intersections. That’s more of a research surprise than a writing surprise, but it’s a good lesson in the ways research can both expand and deepen the world you’re writing.

I’ve thought about this a lot, as the book is a speculative-literary hybrid. You hope that your book appeals to both literary and science fiction audiences, and at the same time worry it’s too literary for science fiction readers and too speculative for literary readers. But I think there are many people who are looking for work that deals in the intersection and feels a humanistic wonder about the sciences. That’s who I most want this book to find. Watchers of Cosmos. Lovers of Carl Sagan. People fascinated by astronomy and particle physics. But also anyone who loves a good story.

Most of the book is made up of two cross country road trips along Route 66, so there’s not a lot of cooking in the book. I think the best way to celebrate the food of the book would be to take off on a long, lonely highway and treat yourself to a burger or a big diner breakfast. Bonus points if it’s on the Mother Road.

READ MORE ABOUT THIS BOOK: https://tinhouse.com/book/singer-distance-ebk/?tab=id_hardcover