TBR [to be read] is a semi-regular, invitation-only interview series with authors of newly released/forthcoming, interesting books who will tell us about their new work as well as offer tips on writing, stories about the publishing biz, and from time to time, a recipe! 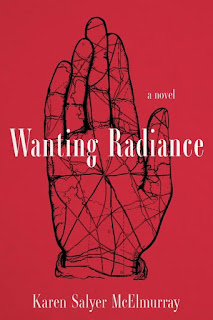 Miracelle Loving, Tarot card reader and grifter and the daughter of a fortune teller, has been living on the road for years when she first hears the voice of the ghost of her long-dead mother, Ruby.  Wanting Radiance is Miracelle’s journey toward finding the truth about her past—who shot her mother, who her father is, and why her heart has long been closed to love.

Which character did you most enjoy writing?

As I wrote Wanting Radiance, I found myself surprised to identify most with Della Wallen, who is the owner of a diner called The Black Cat, in Smyte, Kentucky.  Miracelle Loving ends up working for Della during a long, cold winter.  In early drafts of the novel, Della was a more minor character—as someone for Miracelle to talk with, try to get information from as she dives deeper into understanding who Russell Wallen as the father she never knew.  I grew to love Della, her strength laced with bitterness and her complex relationship with love itself.  Della was based on a great-aunt of mine who owned a restaurant and filling station.  As I came to know Della, I also came to know more about the woman I’m from—and my own inheritance of strength and perseverance.

Which character gave you the most trouble?

Ruby Loving, Miracelle Loving’s mother, was in many ways the most difficult character for me to pin down.  The character was originally inspired by a fortune teller I met in Weaverville, NC.  I had been going through a hard time in my life, with the end of a long-term relationship and much confusion about who I was and what I wanted next in my life.  I went to have my fortune told by this woman who lived in a trailer on the outskirts of Weaverville.  When you went into the trailer, you had to go back into the bedroom where the fortune teller—an enormous woman—lay in a big bed with a velvet headboard.  She read the shadows in photographs.  Originally, that woman was Ruby Loving.  As Ruby evolved, she for awhile was a strange teller of futures who’d been born with fingers long as teaspoons.  Later, she became more lovelorn, sort of like a woman spurned in an old-time ballad.  Finally, parts of the novel were written in her voice, and she became herself.

What are some of the highs and lows of your book’s road to publication?

Well, early on, parts of the book appeared in anthologies, one of which was Red Holler, from Sarabande Books and edited by Wayne Thomas and John Branscum.  That felt wonderful, seeing the story evolving and already finding wings.  Later, as drafts of the book evolved, I sent it several times to an agent for whom I have great admiration.  She loved it, but felt hesitant about the how she’d sell the work.  It was literary, language and character based.  That experience meant more drafts and, eventually, some hard work with a free-lance book editor.  In the end, the hard work was the real high of this novel.  I learned so much about structure, about narrative arc, about writing characters who are convincing, both in how they speak and how they more, how they think and what they want.  I am pleased with the final form the novel took, and the home it found in that form.

In one of my favorite documentaries, fiction writer Larry Brown is talking about being disciplined.  “Even if you can’t get words down on the page that day,” he says, show up.  “Sit there for three or four hours a day.”  My writing is a discipline and I show up for it in many ways—emotionally, spiritually, physically.

My favorite advice is “write until something surprises you.”  What surprised you in the writing of this book?

I won’t give away the plot, but just let me say that the night of Ruby Loving’s shooting held me surprises that I discovered as I wrote.

The title for my novel came to me on my long drives to Kentucky over these many years.  I pass road signs with names for all the little coal towns I remembered from my childhood—Neon, Jenkins, Betsy Lane—and I imagined a town called Radiance.

Make a pot of coffee early in the morning.  Use fresh ground coffee.  Buy something rich enough to whet your coffee appetite when you open the can or the bag, a scent that sets you mouth water, but not something fancy.  Pour the first cup in a big, heavy mug and sit down with the morning paper to get your day started.  Keep the pot going all day long.

READ MORE ABOUT THIS AUTHOR: https://www.karensalyermcelmurray.com/