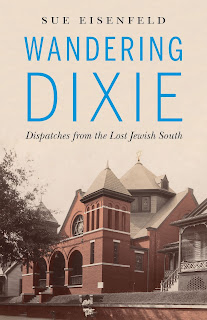 Wandering Dixie is a travel-through-history memoir about Jews, the South, race, the Confederacy, and me—my discovery of some worlds in the United States that I never knew existed. It’s a “Yankee’s journey” through the Deep South. And it’s a journey through the lost Jewish communities of the South, intersecting with some of the less-familiar African-American history of the nation.

I write in a genre never-never land—not deep memoir, definitely not serious nonfiction. A travel memoir that isn’t super travely and definitely not service oriented; creative-nonfiction/literary-nonfiction that’s too U.S. history-ish to be considered CNF sometimes, but with chapters that are essay-ish. It’s about Jews of the South, but even more so, it’s about a white girl discovering the depth and value and meaning of the lost, hidden, and denied African American history of the nation. Does this break boundaries? It breaks rules. One review categorized this book under “Religion,” which doesn’t make any sense to me, even as the book uses Jewishness as its fulcrum.

I’m not sure this type of writing takes courage; it’s just what came out of me. Maybe the courage is in letting it be what it is meant to be, regardless of whether it will do well or find a big audience.

Does each hem and haw in revision count as a high and low? Each chapter is like a different child that must be nurtured individually, that has different needs and requirements, lengths and breadths. Making each chapter work is a low and a high every day, over and over again.

I wound up having two presses want the book at the same time, and I agonized over which one to choose. I guess that was a high (but also a low – I am bad with decisions). Both were university presses with a CNF category. Both were well respected. I went with the one where I knew the editor and she knew my writing, and where the press had already received comments from an outside reviewer, so I felt confident that the work had been well vetted, and I knew the direction it was going.

A lower spot was that it took me so long to conduct the travel and write the book, and I feel it might have been better placed in the state of the world if it had come out about a year earlier. But I couldn’t think or write any faster.

One of my instructors in my graduate program told me that you should plan to spend about five years with your book subject, so it better be something you can live with for that long. When I first heard that, I thought, “There’s nothing I’m so fascinated by that I can attend to it for five years.” But later I realized: Whatever “it” is, is actually a braid of numerous threads—in this case, southern food, music, and culture, as well as religion, traditions, history, people, and politics.

This was originally going to be a book about traveling through the history of the Civil War. Then I realized that it should really be a journey through the lost Jewish South because no one had done that. But the biggest surprise was that along the way, it became a journey about becoming more woke. It was the African American history that became most interesting to me, that I kept seeking out and writing about. Being on the ground, in the landscape, where key moments in African American history and civil rights history happened allowed me to better understand what “institutional racism” really meant, and how “white privilege” really worked, and what those terms meant for me and my life journey. I did not expect to be writing a book that included African American history, but that’s what happened. And maybe that limit is part of our nation’s problem in the first place.

Finding the right title is an art unto itself. Wandering Dixie came about after much research and brainstorming, cutting out pieces of paper with key words on them and moving them around; concept mapping; and a back-and-forth with my editor. We wanted it to indicate travel writing, Jews, and the South all at once, which I think it accomplishes—playing off both “whistling Dixie” and the idea of the “wandering Jew.” For the subtitle, Dispatches from the Lost Jewish South, my editor really wanted to emphasize the Jewish theme of the book. But I love the fact that it echoes Tony Horwitz’s Confederates in the Attic: Dispatches from the Unfinished Civil War, which was one of the influences for my book.

The most divine southern food I ate during my forays to the Deep South over a four-year period was lemon icebox pie, a relative of key lime pie. I had a slice at Fat Mama’s Tamales in Natchez, Mississippi, that changed my life: https://fatmamastamales.com/gourmet_food/lemon-icebox-pie/

This is a recipe I found and made that is pretty close:

Heat oven to 400 degrees. Combine crumbs, sugar, and butter in a bowl until evenly mixed. Transfer to a 9”deep pie dish, and press into bottom and up sides to create a thick crust; set aside.

Squeeze lemons by slicing them in half (across the equator), sticking a fork in the center and using the fork and squeezing action to press out all the juice into a bowl. Combine juice, milk, and egg yolks; beat on medium-high speed of a mixer for 5 minutes. Pour into prepared crust. Bake until filling is only slightly set—until the center jiggles slightly, like a soft-setting custard, about 20 minutes. Remove from oven, set on cooling rack, and let cool for 90 minutes. Then stick a few toothpicks in it and cover with plastic wrap (toothpicks should hold up the wrap). Freeze at least 6 hours, or overnight.

Take out of freezer 1 to 1.5 hours before serving (no more; it will get too warm) (You want it just barely not frozen). Just before serving, combine cream, vanilla, and powdered sugar in a bowl and whip until stiff peaks form. Serve a large dollop onto each slice of pie.

Store leftovers in freezer.
(Do not store cream in freezer; it will freeze solid.)

READ MORE ABOUT THIS AUTHOR:  www.sueeisenfeld.com

ORDER THIS BOOK FOR YOUR OWN TBR STACK: www.politics-prose.com/search/site/Eisenfeld