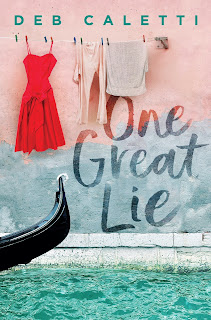 One Great Lie is a crossover YA novel about Charlotte, who travels to Venice for a summer-long writing program, led by the brilliant and charismatic author, Luca Bruni. While there - with the help of Dante, an adorable conservation student - she also hopes to uncover some hidden truths about her Venetian ancestor, the poet Isabella Di Angelo, who might be the real author of a very famous poem. The events of that summer will force Charlotte to confront the long, dark history of powerful men—and the determination of creative girls, in this deeply feminist book that is also full of mystery and romance.

I most enjoyed creating the character of Luca Bruni, mostly because he was a challenge. Bruni does some awful things, but it was also important for the reader to understand why Charlotte might initially admire, look up to, and even love him, and why she’d grieve the loss of who she thought he was.  He needed to be as complex, as such people are in real life: brilliant, troubled, someone you both felt sorry for and longed to be, utterly charismatic, ultimately empty.

Charlotte’s mother gave me the most trouble. She’s an important character, even if we don’t see much of her. Charlotte’s mom is angry a lot, and sometimes scary, and readers need to know this in order to understand Charlotte’s relationship with Bruni. He, too, had a turbulent home life, and this makes Charlotte feel like he has a unique ability to understand her. Her vulnerability is something he’ll exploit, as well, as she defers to him and tiptoes around his volatility. So, the character of Charlotte’s mom helps a reader to comprehend the why of all that. But Charlotte’s mom is not one thing either. She’s also loving and anxious and frustrated with her life. As a secondary character, I had less space to show that complexity, which made it trickier.

Since I’ve published nearly a book a year since I first began back in 2000, my “road to publication” as a whole is a well-trodden one. But this book’s particular road was odd given that it was completed and edited during the pandemic. Counted among the highs: the fact that it was mostly finished by then. It was a comfort to be already well underway in a book I loved writing, and entering my favorite part of the process, too – editing. It would have been much more difficult if I’d been attempting to start a new book.  A low – my longtime imprint at S[imon]&S[chuster] was dissolved, and the company went through a restructuring. I’m with a new imprint at S&S now, but it was sad to see friends and colleagues of many years move on.

My favorite piece of writing advice is to mostly ignore writing advice. I think it’s always great to remember that your honest voice is the most powerful thing you have as a writer, and getting tangled in how-to’s can sometimes take you farther away from that.

One great tip, though? End your writing day when you know what’s coming next. If you stop when you’re stuck, you’ll end up with a clean closet, a pile of stuff you baked, old photos organized, and tackling that hated paint job, everything but those dreaded pages.

What surprised me were some of the people, real people, who I didn’t even know were going to be in the book, who found their way in only after one bit of astonishing research led to more and more of it: the feminist writers of five hundred years ago. I had absolutely no idea that women (many of them teens), were writing and publishing bold and controversial feminist works way back in the 1500s. It was an awful and shocking realization, that we are still writing about the same subjects that they were writing about back then, and struggling with the same power dynamics, too. I found those women incredibly inspiring, and it’s extraordinarily meaningful to me, as a writer and a woman in the twenty-first century, to share their stories in my own work.

I’d love for my readers to know that all of the places, celebrations, and historical facts, facts about drowned manuscripts, locked letters, ancient teen writers, and more that they’ll read about in the book are all real and true. Fictional license was taken with Luca Bruni’s private island, La Calamita, but it, too, is based on the very real “Plague Island,” La Poveglia, which is still home to the original, eerie, abandoned hospital and bell tower. Facts about it, the superstitions, the ground of ash… all true. I’ve never done more (and more fascinating) research for a book, and I’m thrilled to share it.

This book has SO MUCH GREAT ITALIAN FOOD! Canederli, and shrimp scampi, and fried artichokes, and cheese, and wine, and after-dinner liqueurs, and various cicchetti, like fried meatballs and tramezzina, and, and, and! Let’s not forget dessert, such as lemon mousse, and elegant pastries, and fritole. Here’s the recipe, because what’s not to like about fried dough rolled in sugar?

READ MORE ABOUT THIS AUTHOR: www.debcaletti.com

READ AN EXCERPT FROM THIS BOOK (through June 30, 2021): https://rivetedlit.com/free-reads/