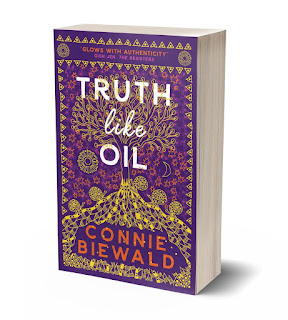 TRUTH LIKE OIL is the story of two mothers in Cambridge, Massachusetts, Nadine Antoine, a Haitian-American nurses’ aide, and Hazel Watkins, a white, cantankerous nonagenarian felled by a stroke, who struggle with each other and their sons.

Which character did you most enjoy creating? Why?

I’ve really thought about this question and keep coming back to the unsatisfying answer that I can’t answer it because I enjoy them all in such different ways—even characters with cameo appearances. They all have their stories, the reasons they act and think the way they do, and figuring all that out is actually the thing I love most about writing. The tricky thing about this book is that I began with two main characters, Nadine, the Haitian-American CNA and Hazel, the ninety-year-old white woman felled by a stroke, and in the first draft they had equal time. As the drafts evolved, Nadine became more central, and Hazel, though still important, had a lot less pages. Readers made the point that a little of her went a long way. Some people even wanted me to cut her from the book, but that was not going to happen.

I wouldn’t call it trouble, but Nadine, the driving reason for the book, is the reason I began going to Haiti. I needed to learn a lot about her culture and background to do her justice on the page. For more than a decade I returned to Haiti once or twice a year to give workshops on writing and progressive education to teachers and kids at Lekòl Kominotè Matènwa on Lagonav, Haiti. I learned some Haitian Creole in the process and developed a lot of relationships—all of which took time away from writing. That’s part of why this book was thirteen years from idea to publication.

I started writing this book in 2007 when it never occurred to me to be hesitant about writing a Haitian character. If Nadine began whispering in my ear now, in the current literary climate clamoring for more stories by POC, I don’t think I would have wanted to take her on. I am all for people telling their own stories. In the beginning, Hazel and Nadine had almost equal time in the book, but as I mentioned, in each draft, I cut Hazel’s part more and more. I think even now, I’d feel more comfortable as a white person having written this, if Hazel had a bigger role, and it wasn’t as much a Haitian book. It’s interesting to think about—I have less in common with Hazel than Nadine, but I worry more about my right to write about Nadine, than Hazel. I’m very aware of White Supremacy as a terrible presence in the founding of our country and society today and don’t want to be contributing to it with my writing. Agents and publishers were also reluctant to take this on, maybe for that same reason. Still, it’s fiction, and one of the main reasons I write is to discover what it’s like to walk in someone else’s shoes—someone different from myself. I sincerely hope I’ve done it well enough.

I’ve been blessed with many inspiring writing mentors, but the most influential one is Grace Paley. Notice the verb tense. She died in 2007, and I still think about her almost every day—actually, maybe every day. She is famous for saying that if you want to be writer keep your expenses low and never live with anyone who doesn’t support your writing. I have followed that advice and do believe it is fundamental.

A lot of things surprised me about this book, but the biggest one is how a fictional character could change my life so profoundly outside of writing. Because I wanted to understand Nadine more than I could from talking with Haitian people I know in Cambridge, I traveled to Haiti and even though I insisted I was going one time as a writer and NOT a teacher, I went back often and had the privilege of participating in that amazing school and community on the island of Lagonav.

For all the years I spent writing this book it was called The Heart of the Yam. I love nouns and I love food. I was sure that was the title. It was accepted for publication with that title. Then, in a brilliant call, a friend of mine, not Haitian but a woman of color, said she thought it was problematic. She said that if I’m worried about being a white person writing about a Black main character (which I was/am—see above) I shouldn’t use the word “yam,” so connected to Africa, right in the title next to my Germanic author name. Heart of the Yam comes from a proverb (as does Truth Like Oil). I was already worrying about using proverbs due to their role in the essentialization of culture, even though I love them in any culture and some Haitian people I know use them a lot. I looked through the other proverbs I’d used as section titles, hoping one would work. Truth Like Oil jumped out. One thing I love about it is that “Truth, like oil, always comes to the surface,”is a proverb in many cultures, and my book is about people connecting cross culturally.

Best question ever! I am a huge fan of cole slaw, and Haitian cole slaw is the best. And it has the best name—pikliz. It’s commonly served with fritay--fried plantains and other fried foods--but I became known in Haiti as the person who enjoyed pikliz most by itself. This recipe I found online looks great, but my friends in Haiti always included a cube of maggi:

MORE INFORMATION ABOUT THIS AUTHOR: www.conniebiewald.com

MORE INFORMATION ABOUT THIS PUBLISHER: https://www.vineleavespress.com/

BUY THIS BOOK FOR YOUR OWN TBR STACK: Please check your favorite independent bookstore, or try these: