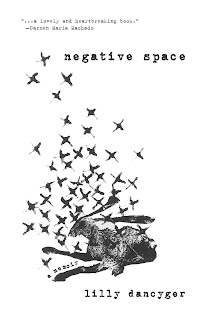 Negative Space is the story of my father’s life, art, heroin addiction, and death—as well as the story of the decade I spent piecing together the truth of who he was by interviewing people who knew him, reading his notebooks and letters, and studying his artwork. There are images of his artwork throughout, and I think of it as a hybrid art book/memoir, with an investigative journalism bent.

Negative Space breaks genre boundaries by bringing art and journalism into memoir—and it breaks the fourth wall by including the story of how the book came to be in the book itself. I don’t think writing about the writing of a book in the book always works, but it felt necessary here, to show how my relationship to the artwork and to the process of interviewing people who knew my father changed over time. At first I thought I could maintain the cool distance of a reporter, but the story inevitably swept me away and required me to engage with my own grief and anger.

There were a lot of lows! I racked up more than 50 rejections over seven years of querying, and when I finally got a book deal, I ended up canceling it. Then I had another brutal round of rejections (during which I also acquired and then fired an agent) before Negative Space was finally selected by Carmen Maria Machado as a winner of SFWP’s 2019 Literary Awards. I wrote about this saga in detail for Electric Literature if anyone wants the whole story.

I don’t think I have one! I don’t really believe in maxims, and I think most of the truisms out there about writing end up being limiting. There are so many prescriptions out there about how to be a writer and how to write the “right” way. Most of the process of finding my own voice and routine as a writer has been about unlearning all of the external rules and advice, and getting in touch with what comes naturally to me, and what works for my way of thinking, and working, and expressing myself. I’ve never been a “write every day” writer, for example, and for years I beat myself up over that. I thought I was failing somehow because I didn’t write the way I was “supposed to,” but when I finally stopped trying to force myself into a routine that just didn’t work with my life, I found a much more productive schedule that works for me and allows me to enjoy writing rather than feeling like I’m doing it wrong. (I work in sporadic, intense bursts.)

I was surprised to discover how much anger was hiding underneath my grief over my father’s death. Confronting that and letting it complicate the story was a big shift for me personally, and for the direction of the story. I think going through that process is what prepared me to edit my anthology, Burn It Down, in which so many other writers engaged with anger that was hiding under other emotions, or other emotions that were hiding under anger.

Titles are so hard! For a long time, the working title of this book was Hunter/Hunted, after a series of deer sculptures and prints that my father made. The concept behind that series ended up being really central to the book, and I came to think of the book as almost a continuation of or response to that series, so I wanted to use the title. But eventually I realized that it only made sense after reading the book, and people I polled seemed confused by it without the context. So I started thinking about artistic principles that were important to both my father’s work and my book, instead, and Negative Space just fit since I was writing around the absence of my father. There’s also a story in the book about how he explained the concept of negative space to me when I was a kid and he was teaching me how to draw that also encapsulates so much of what I was trying to do with the book, but I won’t spoil it.

Not that I can think of… (the only food I mention in the book is from specific restaurants my family used to go to, as opposed to stuff we made at home!). But if pressed, I guess maybe matzoh ball soup with lots of dill.

READ MORE ABOUT THIS AUTHOR: https://www.lillydancyger.com/

READ AN EXCERPT FROM THIS BOOK, “Making Art Out of Dead Things”:  https://bombmagazine.org/articles/lilly-dancyger-negative-space