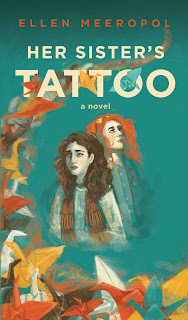 Marching through downtown Detroit to protest the war in Vietnam, Rosa and Esther hear that mounted police are beating protestors a few blocks away and hurry to stop the violence. When an officer is badly injured and the sisters are arrested, deep differences in their responses threaten their close family. Esther has an infant daughter and wants to avoid prison, which means accepting a plea bargain and testifying against her sister. Told from multiple points of view and through the sisters’ never-mailed letters, Her Sister’s Tattoo explores the thorny intersection of family loyalty, betrayal, and clashing political decisions.

The sisters, Rosa and Esther, were both the joy of writing this novel, and the most difficult. Developing their history of a deep connection as sisters and activists and their escalating differences was the major challenge. Their political differences grow stronger as the story proceeds, but I wanted to tease out the nuances of the political choices, and I needed to give them insights into each other’s positions. Their very different experiences of motherhood are central to their political choices and to their reluctant empathy for each other. In addition, the issue of betrayal is large in the story, and trying to understand it from each perspective was both exciting and troublesome.

The major thing about this book’s road to publication is that it took twenty years. I started writing it in 2000; it began as a short story and morphed into the first novel I attempted. I had no idea what I was doing. After several drafts, I gave up and attended an MFA program, working on a new novel. Each time I finished another novel, I returned to this one, writing new drafts and trying to figure out how to best tell this story. Finally, after many years and three other published novels, I got it “right” enough to send to my editor at Red Hen Press. Twenty years. Many many drafts. Finally Esther and Rosa get to tell their story.

Writing a novel, especially one like this that takes a long time, requires an almost illogical belief that you have a story worth telling. I like Jane Yolen’s writing mantra: “YIC – Yes, I can. BIC – butt in chair, because that’s where the muse will find you. HOP – Heart on page, because why else would we write?”

There were several surprises writing this book, particularly in the revision process. In early drafts, the action taken by Rosa and Esther to try to stop the cops from beating protestors was sugar in their gas tank, something my early readers simply didn’t believe. When I changed it, I was surprised by how their new actions opened up a whole area of sibling relationship that I hadn’t known before. Major changes in the structure of the manuscript also led to surprises. Who knew that giving a minor character a voice could lead to the sharing of secrets I hadn’t known before?

Titles are hard. Over twenty years I went through several of them. The novel started as a short story titled “In Whose Camp,” because the first scenes I wrote took place at the leftwing summer camp where Rosa’s and Esther’s daughters meet. The next title also derived from the camp chapters: Until We All Are Blind, referring to the sisters’ estrangement and lack of forgiveness towards each other. There was a third attempt, A Folding of Cranes, that referred to the image of origami cranes that weaves through the novel. Finally, about eight years ago, I came up with Her Sister’s Tattoo, referring to the matching red stars Rosa and Esther had tattooed on their breasts, to signify their shared activism and to promise that sisters are forever. (Except that they maybe aren’t.) Luckily, my editor liked it and it’s the title forever.

READ MORE ABOUT THIS AUTHOR: www.ellenmeeropol.com

ORDER THIS BOOK FOR YOUR OWN TBR PILE:
https://redhenpress.org/collections/spring/products/her-sisters-tattoo-by-ellen-meeropol