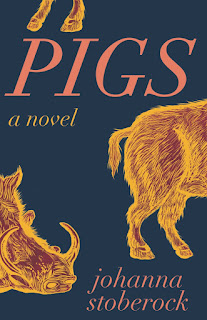 Four children live on an island that’s the receptacle for the entire world’s garbage. Garbage washes ashore, and the children feed it to a herd of giant, magical pigs. It’s a perfect system until one day a boy washes up in a barrel and the children have to decide whether he’s garbage, too, meant to be fed to the pigs, or whether he’s one of them. What follows is a fable for adults about social responsibility, environmental justice, and the things we throw away.

My favorite character to write was the only fully formed adult in the novel, a castaway named Otis. I loved how flawed he is, how he tries so hard to do the right thing (by his wife, by his son, by the children on the island, by, ultimately, the entire world), but how, even wanting badly to follow a moral compass, he just can’t help but be driven by his own desires.

The hardest character for me was actually the book’s central character, a twelve-year-old girl named Luisa. I think I just knew her too well—the kind of frustration she feels at her situation, and the way anger takes over and gets in the way of strength: those are all emotions that I know from the inside out. The thing that was hard about writing her was finding ways to show that emotional life from the outside in. I wanted to write her disappointment, but also her fortitude within disappointment. And I wanted to write the way she handles guilt. And through all that, I wanted her to remain a child, with all the immediacy of response that children can access. It was hard!

It’s been a long road to publication, so there have been lots of highs and lows. The biggest high was probably the first time I shared any of Pigs in public: I read from the first chapter in a local reading series, and for months and months afterwards people around my very small town kept coming up to me and telling me they couldn’t wait to read the whole thing. I’d never had that experience before.

The second high was when I sent it to my agent. I was worried that she would think it was too strange. But instead, she was excited by its strangeness, by the way it didn’t feel like something she’d read before.

And then there was hearing that it had been accepted by Red Hen, and the first conversation I had about it with Kate Gale, Red Hen’s Managing Editor. She so clearly saw a life for the manuscript out in the world, and she had so much faith in it, and her excitement was catching.

The lows? I’ll be selective.

Sometimes it’s lonely to write. And writing a novel takes a long time, so that’s a long stretch of loneliness. And then you get so used to living inside the world of your novel, that when you emerge, you kind of forget what life is like outside it, so that prolongs the loneliness even further.

On a more concrete level, one particular low was revisiting the same scene over and over, recognizing that it wasn’t working, but not having a solution to make it better. It took me years to fix that scene!

I once attended a reading by Ramona Ausubel. Afterwards, someone in the audience asked if she had any writing advice, and this is what she said: “follow your weird.” When I heard that, it felt like something just clicked inside of me. My imagination can go to very unusual places, and it was wonderful to have someone frame that strangeness as a strength rather than a weakness.

The very first line surprised me: “The pigs ate everything.” It came to me before I had a plot or a setting or a central character, and so Pigs is really built around the growing lists of stuff that the pigs of the novel eat (“Kitchen scraps. Bitter lettuce from the garden. The stale and sticky contents of lunch boxes kids brought home from school. Toenail clippings. Hairballs pulled up from the drain. After the pigs were done, there weren’t even any teeth left over, not even any metal from cavities filled long ago”). Once I’d accepted that, it became a great source of freedom—a structural device, and a device for seeing the world of the novel in great detail. And the more I thought about what we throw away, the more the characters themselves came into focus. So I guess the biggest surprise of all was the way the world of the novel created the characters rather than the characters creating the world.

Well (spoiler), there’s a pig roast three quarters of the way through the book. And whole roasted pig is unbelievably delicious. But somehow I don’t think that’s quite the right recipe to share. So I’ll go with this: before the pig-roast, but well into the novel, Luisa, the main character, tries a macaron for the first time. While I’ve never made them myself, I’ve eaten quite a few, and think this recipe for chocolate macarons looks fantastic:

READ MORE ABOUT THE AUTHOR: www.johannastoberock.com