TBR: The Virgin of Prince Street: Expeditions into Devotion by Sonja Livingston 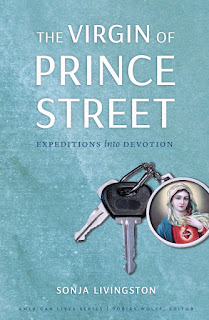 Inspired by my unexpected return to Catholicism and my simultaneous frustration with its ongoing scandals and disappointments, THE VIRGIN OF PRINCE STREET chronicles a series of expeditions (including to a holy well in Ireland, a mobile confessional booth in Louisiana, a county jail on Thanksgiving day, etc.) as well as sojourns through memory that together explore my changing ideas about devotion.  That’s a very detailed way of saying that these essays use my encounters with fading tradition to help map and explore the tender terrain of the human heart.

Which essay did you most enjoy writing? Why? And, which essay gave you the most trouble?

“Miracle of the Eyes,” looks at the phenomena of moving statues in 1985 Ireland. It also looks at the case of Ann Lovett, a schoolgirl who died giving birth near the Marian statue in her town and explores the desire some people (especially girls and women) have for miracles, especially when their lives are so dependent on the rule of man. Despite the heavy content, I loved researching the various ways people described seeing the statues move. Some saw Mary smile. Others saw her breathe or wink or cry. The essay begins with a litany of these observations, and much of my enjoyment involved incorporating the delicious sounds of all those Irish place names into the piece: Courtmacsharry, Kilfinane, Rathdangan.

Less enjoyable was “Devil’s Advocate,” which tells the story of a priest and nun who died in a 1967 fire. The priest ran into a burning church to save the consecrated hosts while the nun went in to be certain no children were trapped inside. But the story told after her death was that she followed the priest to aide him in his sacred task. Whether she followed or went in of her own accord may seem a minor point, but beyond the idea of obedience versus boldness, it highlights divergent notions of faith—did God exist in the Host or in the children rumored to be hiding in the church? I struggled because I didn’t want to disrespect their legacy or beliefs, especially as incongruities and issues of gender arose. They’re always arising if you let them. And I let them.

The lows were all in the writing! Not the act of writing but the idea of the writing about Catholicism. The Church did not make it easy. Every day a new report of abuse or backward thinking emerged. I tossed and turned for the three years I wrote these essays and have never been so uncertain of my subject. In terms of publication, the path was surprisingly straightforward. The collection is being released as part of the American Lives Series at the University of Nebraska Press. The real high was that the editor, Alicia Christensen, was open to hybrid essays (lyric and journalistic) that explore such a highly charged, divisive, and increasingly politicized topic.

I can’t remember who said it and just googled to no avail. Alicia Ostriker, maybe? Anyway, the advice is this: The job of the artist is to trust her obsession. This is so massively reassuring. It means I don’t have to try to make sense of caring about an old church or a tradition that’s so obviously flawed. It implies that doubt and insecurity are part of the thing and that my only job as a writer is to stick with whatever has snagged my heart, to honor it, and see it through.

I was surprised by how much I enjoyed incorporating elements of literary journalism. I’ve always written personal lyrical pieces that rely on an interplay of language and perception, but these essays required more active engagement with the world outside my head. I suddenly found myself riding shotgun with a Cajun priest in a mobile confessional booth, for instance, or traveling all over Buffalo looking for a missing Virgin Mary statue. I had to channel my inner Nancy Drew and totally loved it.

The title is inspired by my search for a missing statue from my childhood church in Rochester, NY. As Catholic churches close in cities throughout the Northeast, Great Lakes, and Mid-Atlantic, their contents are sold off, stored, or sometimes discarded. When I returned to church and did not see the blue-cloaked Mary I grew up with, I decided to track her down. This was undoubtedly a foolish thing to do, but foolishness has its place, and the searching for the missing Virgin Mary turned out to be a perfect way to explore the American Catholic tradition as it continues to decline and change.

How can I decide between Cajun-Fried Frog Legs, Irish Root Soup, Buffalo Pierogi, or Baklava from Tarpon Springs? I’ll keep it simple and sweet and go with Pouding Chômeur from Quebec. (Advice for late summer: serve w/fresh peaches and vanilla cream).

READ MORE ABOUT THIS AUTHOR: http://www.sonjalivingston.com/

ORDER THIS BOOK FOR YOUR OWN TBR STACK:
https://www.barnesandnoble.com/w/the-virgin-of-prince-street-sonja-livingston/1130823825

READ AN EXCERPT, “Miracle of the Eyes”: https://www.cincinnatireview.com/samples/excerpt-from-sonja-livingstons-miracle-of-the-eyes/