TBR: As a River by Sion Dayson 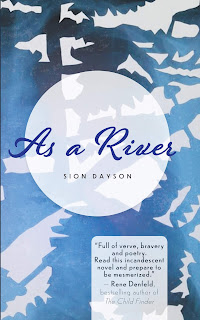 Greer Michaels has come home to tend to his dying mother - but this means reckoning with the ghosts of his past. Set in 1977 in a small town where family secrets are rooted in the traumatic history of the segregated South, As a River is a spare and lyrical exploration of our struggles to understand each other, and the stories we tell ourselves in order to survive.

Though I am completely in love with my protagonist, Greer, the novel features several characters, as everyone’s story is intertwined with those around them. It was an interesting process getting to know each person.

I particularly enjoyed creating Ceiley, a curious teenager whose mother claims she was immaculately conceived. She has a burning curiosity about the world outside of Bannen, Georgia, so when Greer shows up in town after many years traveling the world she is obviously drawn to him. I found the unlikely friendship that develops between the two really touching.

The character I had the most trouble with was Caroline, the girl Greer fell in love with when he was sixteen. She was hard to get a handle on, maybe because she herself was a rebel and hates to be pinned down. She actually appeared in one of my dreams once, dangerous and livid. She was outraged that I was getting her wrong on the page. She was the only character who snuck into my subconscious to threaten me!

Wow, how long do you have? It has definitely been a long journey.

I queried agents for a couple years. Lots of feedback said that the novel was “beautiful, but too quiet.” (Quiet, beautiful novels are actually some of my favorites, but I digress).

I realized it probably made more sense to approach small presses, so I did. Another long process, but I was thrilled when it got signed in early 2015. Right when the production cycle was about to start, however, the press abruptly closed. Needless to say, I was heartbroken.

The novel then found its way to another small press who had agreed to take on some of the original publisher’s orphaned manuscripts. Though the intentions were good, they unfortunately didn’t have the bandwidth to follow-through on the commitment. It was frustrating; nothing ever advanced.

At that point, I put the book on the back burner. The querying and publishing gauntlet felt like waiting for others to bestow their approval upon me – a miserable feeling. I knew I needed to reclaim my own sense of agency. Yes, publishing a novel was a dream. But I had other dreams, too – ones that I could achieve myself.

I moved to Spain, a long-held desire and started blossoming again. Remarkably, my first summer here, in 2018, I received two emails from different publishers on two consecutive days. The first was an offer; my manuscript had been sitting in a Submittable queue at a small press for nearly a year.

The second message was from Jaded Ibis Press. While I had been delighted by the previous day’s news, something inside me immediately lit up as soon as JIP’s email arrived. I felt intuitively that I had finally found a home. Or rather, it had found me! They had heard of my manuscript from another press who had enjoyed it but didn’t have space in their catalogue. But unbeknownst to me, they had recommended the manuscript to Jaded Ibis, who reached out asking if it was still available.

I am certain that surrendering and becoming less attached to the outcome of publication made space for the abundance to arrive. It also highlighted, again, the importance of community and connection. You have no idea who your champions will be, but they are out there. Treat everyone with an open heart.

I’m not a writer who ever has a clue about where the words are taking me. I don’t start with an idea or a plan; it begins with an image, or a sound, or a stray line of dialogue. This means I never know where I’m going.

Writing often feels like stumbling in darkness through a large, strange house. Trying to draw a blueprint of a place I have never been.

One of my advisors at Vermont College of Fine Arts, Ellen Lesser, had a simple suggestion: inch forward in the dark.

The directive resonated. I absorbed it as a way to combat my panic about feeling lost in a foreign house. Stretch arms out in front of you, take tiny steps. Get to know the space. You might bump into things, run into a wall. So change course. You’ll eventually find a door. Open it! After a time you’ll come across a lamp. Switch it on. Suddenly an entire room becomes visible. It might be different than what you’d originally pictured. But it’s by continuing to explore and moving forward that you find the light.

At first I thought As a River would be a series of interlinked short stories. Some chapters worked as stand-alone stories, but others just didn’t. I realized after awhile that I would have to break open the narrative and try a different approach.

What finally clicked was an idea that the wonderful novelist Sophie Hardach offered after reading a draft. She suggested that I think of narrative washing lines that I could string along throughout the whole book; I could then peg the scenes onto those lines.

So while things happen in different years, the complex structure I had been wrestling with suddenly had a simplified solution. 1977 became the “present time” of the novel and every chapter set in that year moves forward chronologically as you advance in the book. So straightforward and yet I hadn’t been doing that before – ha!

Interspersed between the present time chapters, we fly back to the past or into a new character’s head. The latter was also a big surprise! I think of the first-person sections as “soliloquies.” Most of the book is written in close third person to Greer, but some characters demanded their own sections to speak for themselves. They were not who I would have expected, either. Everyone has something to say!

I credit my publisher, Elizabeth Earley, for this one. I had been living with another title for years. One that evoked a kind of bittersweet nostalgia and came from some advice Greer offers Ceiley – but was really something he needed to hear himself.

My publisher wasn’t wholly convinced by the title, however. She thought we needed one that pointed to the river’s primacy in the story. Once I was able to let go of my long-held idea (you’ll notice the importance of surrender in my publishing tale!), I agreed with the wisdom in that.

The river is central to the novel, playing a crucial role in many of the character’s lives, as well as providing a literal dividing line. Bannen is segregated racially into East and West with the water as an actual physical barrier between the two.

But it’s not just a barrier. People also go there seeking freedom. It’s a source of both joy and pain.

My publisher and I brainstormed several different options for titles, looking at the many times I evoked the river for clues. At a late hour in the process Elizabeth went to a Buddhist monastery. She wrote me the next day saying that there was a sign on the wall that read  “go as a river.” And then the group did a long, silent walking meditation through the woods together and the monk said, “move as one like a river.” And so, she wondered: what about As a River?

She suggested other options stemming from that experience, too, but As a River immediately felt right to me. Its unadorned beauty. A simple elegance. It seemed to match the lyrical restraint of the novel’s style and leave space for interpretation. It offers an invitation to inhabit the river and its meaning. An important underlying tension in the book is the power of the unsaid, and I think the title points to that, as well.

I’m not a good cook myself, but some soul food and sweet iced tea would be perfect to get you into the book’s Southern mood! One of the novel’s culminating scenes sees an overflowing of dishes and drinks at a gathering. Food is steeped in tradition and provides the social glue.

So as to provide an idea, here’s a link to an iconic country cooking restaurant in my hometown of Chapel Hill, North Carolina. Mama Dip’s opened in 1976, around the same time as my novel takes place. You’ll find recipes for cornbread, BBQ chicken wings, cucumber coleslaw, among many others. Yum! I got hungry just typing that.

READ MORE ABOUT THIS AUTHOR: https://siondayson.com/