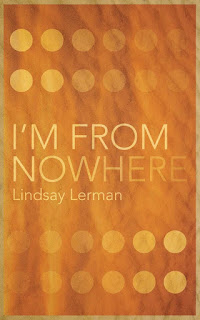 A woman comes to terms with the conditions of her existence. Her husband has just died--everything has started to come apart in her--human extinction is imminent, the world is burning down, etc. She tries to figure out if she can carry on, how she can carry on. It’s a small book, gentle but also sharp. I think of it as a pocketknife.

I think I refused certain conventions. In some ways it’s a stark, sparse book. There is little backstory, little dialogue or description. It has an honesty and intensity that might ask a lot of readers. I think it gives voice to complicated, sometimes conflicting desires. And I think it represents the collapse of the natural world in an unsettling way. The climate is not dramatized in the book--I was careful to make sure it doesn’t feel like a major crisis at every moment in the book. I wanted it to feel the way it does now, and for that fact itself to be unsettling. The collapse of the world is accepted, sometimes with a shrug (because what else can we really do?), and people struggle to keep living their lives, adjusting and adapting as the food runs out, as the summers become unbearable.

The courage to write this book came from feeling like I had no other option. I wasn’t able to articulate it at first, but at some point it become clear that my choices were: write this book (over the course of 8 years) and work through the issues the book takes on, or let your soul wither and die.

I knew this book was not exactly bestseller material, and I had a sense that it might be a good fit for the indie world, but I knew nothing about publishing in general. My only previous publications were academic ones, and I didn’t know many published (non-academic) writers, so I didn’t have any points of entry or anyone I could ask for advice. I started looking for an agent because most information I could find said that getting an agent is step one. I tried for a couple years, and I got some genuinely helpful feedback from some commercially successful agents who said (often in coded language): Look, you just aren’t the writer we’re willing to take a chance on right now. Some were direct enough to say that most publishing houses will only take on a couple “intellectual women” each year, so my chances of being picked up by them were too slim, especially because I’m totally unknown.

Once I started looking carefully at as much of the indie world as I could, my mind was blown. It’s just packed with daring, creative writers who break all the rules in interesting ways and for good reason. I knew I would eventually find my place with an indie publisher. Once I found CLASH, everything changed.

My former adviser once said to me, when I was really struggling to finish my dissertation: You’re a good steady driver, Lindsay, you just need to not let go of the wheel. It was life advice masquerading as writing advice, though I’m sure she wasn’t trying to give me life advice. Some version of that is what I typically need to hear (or tell myself) to keep going. Keep steering this thing, accept that steering it is your responsibility--that there is no one else to take the wheel, that if you let go of the wheel, this thing you want to happen simply will not happen.

The other piece of writing advice I tend to keep in mind a lot is to be wild and ferocious in imagination but quiet and disciplined in practice.

What surprised me most is how much the writing of it would inform my life and allow me to re-shape my life. I don’t mean that I became the characters or anything like that. I mean that I saw that when you start writing in forms you don’t recognize, you can also start living in forms you don’t recognize. Creating a world on the page allowed me to see the extent to which we are all creations that can be made and re-made.

The title and a couple scenes were the first things I thought of when I began the book, back in 2010. I was living in Istanbul, Turkey at the time, and I was thinking a lot about what it means to have a home, a place. When we examine what has made us--customs, traditions, habits, dreams, compulsions--it’s very difficult to say where any of us is from. It just felt right. I assumed it would be the working title and that I’d eventually change it, but it stuck.

Haha, I am food-obsessed--this is the kind of question I dream of. The book is very much about hunger, having a bigger hunger than one is supposed to. But there’s very little food in the book. One scene features a hamburger and fries. I had so much fun writing that scene, writing the burger as this thing that represents so much--so many resources in one obscenely decadent but really commonplace meal. When I want a burger, though, I don’t try to make it at home. I can’t get it right, so I leave it to the pros.

READ MORE ABOUT THIS AUTHOR: https://lindsaylerman.com/

ORDER THIS BOOK FOR YOUR OWN TBR STACK: https://www.clashbooks.com/new-products-2/lindsay-lerman-im-from-nowhere-preorder