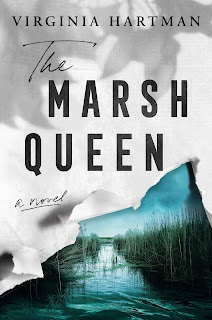 Loni Murrow, a 36-year-old bird artist at the Smithsonian in DC, returns to her hometown in the wetlands of northern Florida to care for her ailing mother. There, she gets hints that her father's long-ago death is not what she’d always thought. The swamp and its creatures lead her toward a solution she’s not sure she wants, but can’t resist.

The character I had the most fun with was Mr. Barber. He was an old friend of Loni’s father, and was present in early drafts, but in later drafts he started to pop up in interesting ways that I hadn’t anticipated. He is someone she thought she knew when she was a child and her father was alive, but in the present-day part of the story, his erratic comings and goings are alternately comical and scary.

The character who gave me the most trouble: Probably Delores, the botany librarian at the Smithsonian. I knew she had to be in the book, but early readers wanted to cut her scenes. They didn’t understand what she was doing there, thought she was extraneous. But my editor Jackie Cantor said, “I think you need more Delores.” And that gave me the permission I needed to work harder on Delores and to weave her subplot seamlessly into Loni’s story.

Well, the highs came at the end, when Jackie acquired the book. Not only that, she “got” the book. She understood who the characters were and what the movement of the story had to be. The back-and-forth I had with her was highly constructive, because she was so invested in the novel.

The lows, of course, were all the rejections before the book crossed Jackie’s desk. But every writer has to put up with that. I told someone recently—your story just hasn’t passed in front of the right eyes yet! So keep sending it until it does.

Well, there’s the Frank O’Connor idea that a story is the point past which nothing will ever be the same. And then John L'Heureux’s thought that in fiction, only trouble is interesting. But I think the one I quote the most is from my former teaching colleague Hache Carillo: “All you want to write (dramatic pause) is the moment!”

The one character everyone responds to is Adlai. What surprised me was the way Loni fights her attraction to him, even though they’re drawn together by a shared love for the natural world. What else surprised me? I guess Loni herself, because I didn’t know when I started writing that she would become such a badass. I mean, she draws birds. That’s kind of a quiet profession. But the girl shows incredible courage in this story.

I guess I want booklovers to know that while the plot summary might draw readers in, my goal is to feed them something delicious the whole way through, word by word, without ever letting on that there is a writer behind the words. My gauge of success is when a reader is completely immersed in the dream of the story, without every wanting to come up for air.

Yes. Loni’s mother Ruth has a capacious herb garden, and she has learned all of the folkloric uses of the plants she grows. Calendula, or marigold, is a showy yellow flower, but it’s also edible, and called by some “Herb of the Sun.” At one point, Ruth considers making a calendula cake to give the younger Loni a sunny outlook. I have tested the recipe, and while I can’t swear to any mood-enhancing properties, it did taste really good.

Elsewhere in the narrative, there’s also an egg salad that contains a supposed herbal love potion, but I’ll let readers imagine the proportions in that recipe, and venture there with caution.

(Be sure these are grown without pesticides)

Dust the calendula petals with a bit of flour until lightly coated. Set aside.

Cream butter and sugar until smooth.

Add egg yolks one at a time.

Sift flour with soda and add alternately with sour cream.

Fold in egg whites in three stages, sprinkling a third of the calendula petals in each time.

Pour batter evenly into the tube pan and bake for 1½ hours.

Cool on a cooking rack in the pan for 30-40 minutes. Then turn pan over to extract the cake onto one plate, put another plate on the bottom, and turn the cake right side up.

Garnish with whole marigold flowers and serve warm or at room temperature.

READ MORE ABOUT THIS BOOK: https://www.simonandschuster.com/books/The-Marsh-Queen/Virginia-Hartman/9781982171605

READ MORE ABOUT THIS AUTHOR: http://www.virginiahartman.com

ORDER THIS BOOK FOR YOUR OWN TBR STACK: I hope folks will walk into their favorite independent bookstore and ask for the book. But if they’d like to order it online: https://bookshop.org/books/the-marsh-queen/9781982171605

LISTEN TO AN EXCERPT OF CHAPTER 1 HERE: https://www.simonandschuster.com/books/The-Marsh-Queen/Virginia-Hartman/9781982171605