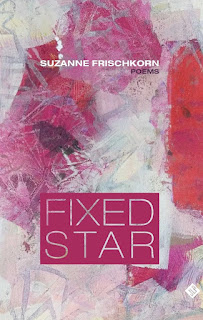 Fixed Star interrogates what it means to be caught between two identities intersected by multiple landscapes, politics, class systems, and the personal sense of being both drawn and cut-off from one's roots. The book is arranged in a series of spirals: a pair of sonnet coronas whose lines twine through the collection, as well as lyric, and prose poems. Braided through the collection are the voices, and echoes of Shakespeare, John Cage, Muriel Rukeyser, John Keats, Normando Hernández González, and others who accompanied me on a decades-long journey across the terrains of Cuba, Spain, Florida, and Pennsylvania.

The sonnet coronas were the poems I enjoyed writing most. The sonnet was the first received form I ever fell in love with, and I love everything about it, the 14 lines, the volta, the containment. In the coronas I found the leaping off of the last line of the previous sonnet to create a new sonnet was right up there with the deep play I consider necessary for me to make poems.

Which poem gave you the most trouble, and why?

The most difficult poem to write was “How Do You Say Orange?” and that was because it was the first time I had written about being the daughter of an immigrant, about how the Spanish language was used in our home after we moved from Florida, the shame of growing up in a dysfunctional home, and revealed (to me) my long held resentment of that shame. At the time it felt risky to reveal so much about our family dynamics.

The best high of the book was learning it was being published by JackLeg Press. I remember every detail of the afternoon when I received the news from Jen Harris and Simone Muench. Most vividly I remember being so moved by Simone’s comments and how I felt so seen. There may have been some tears. I was so thrilled to learn I would be press mates with Maureen Seaton! There were other highs along the way like learning it had been a finalist for The Colorado Prize for Poetry at a time when I was feeling pretty dejected, and other finalist or semifinalist nods for different versions of the manuscript always filled me with gratitude for the readers who continued to push it forward. The lowest point was when I stopped sending it out. I was going through a dark period creatively due to other obligations that required my full attention so I wasn’t generating any new work. Somehow I got it into my head that as long as this manuscript wasn’t published I was still writing. I suspect I was terrified I couldn't make poems anymore and this collection would be my last. I did begin to make new poems eventually, and was finally able to let it go and send it out.

“Don’t be afraid to write crap.”

This is a great question! The entire time I was writing this book I thought I was looking for my tribe, my people, my identity, the people I belonged to, and not until I finished it did I learn that my true people, my true tribe, were other poets and writers.

I think I would like readers to know a little of the background story, the impetus behind the collection. My father was a captain in the Cuban Revolution, and my parents met when he was transporting arms for Fidel Castro through the border town of Brownsville, Texas, where my mother lived. Once Castro took power and revealed his true intentions of dictatorship rather than democracy my parents flew to the United States where my father became a US Citizen. I was born in Hialeah, Florida, and spoke Spanish for the first five years of my life. I began school at a time when “English only” was encouraged by the school system to bilingual parents, and I lost my facility with my first language. Cuba was rarely spoken of in our home for fear it would upset my father and as a result knowledge of my heritage was also lost. So this book was written as a quest to discover my lost heritage, to honor my ancestors, and to uncover the costs of assimilation.

Here’s a recipe for Cuban Pernil:

READ MORE ABOUT THIS AUTHOR: https://suzannefrischkorn.com

READ TWO POEMS FROM THIS COLLECTION, “My Body as a Communist Country” AND “My Body as The Tropicana Nightclub, 1952”: https://www.terrain.org/2013/poetry/two-poems-by-suzanne-frischkorn/

Email ThisBlogThis!Share to TwitterShare to FacebookShare to Pinterest
Labels: Making Myself Hungry, Small Presses, TBR [to be read], Two at the Most, What I'm Reading, Writing Tips
Newer Post Older Post Home