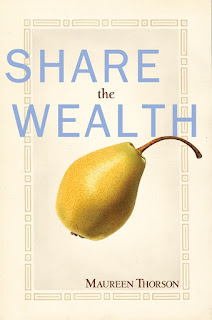 Share the Wealth is a funny-dark exploration of the interplay of luck and abundance. Life is constantly throwing us curveballs – sometimes delightful ones, and sometimes totally crappy ones. These poems try to find the beauty in the world’s both uncertainty and its too-muchness.

Before writing this book, most of my work was in series. My first two books were of poems all drafted around a single idea or theme, and with specific formal restraints. When I started writing the poems that became Share the Wealth, I focused on trying to recover my ability to write poems that would stand up on their own. Ironically, I think that writing a book-length poem or series is for many people far more unusual or intimidating a project than trying to organize singly-written poems into a coherent manuscript. For me, it was the opposite. And of course, when I actually did start organizing all of my “one-and-done” poems into a book, I found that many of them did touch on similar ideas or themes even if I wasn’t consciously aware of the connections when each poem was written.

Share the Wealth went through what I think is probably a very familiar road to publication, at least for books of poems: seemingly endless submissions to contests and open readings! And all the while, revisions. I took poems out, I put others in, I rejiggered the ordering, I line-edited the individual poems.

The lows of the contest/open-reading process are well-known. With many presses and contests charging submission fees, it can feel like you are spending a lot of money without knowing if your manuscript is being taken at all seriously. Some contests don’t even notify submitters of the eventual results. When you’ve been submitting a manuscript for a long time without getting any traction, it’s easy to get discouraged.

But when a manuscript does get picked up by a press, oh, what a feeling! I actually had to sort of sit with Veliz Books’ acceptance of Share the Wealth for a few days before responding. I kept reopening my inbox, sure that the acceptance email would have disappeared in a puff of internet smoke.

I’m a big fan of trying to write every day. Not that I take my own advice – not all the year-long anyway. But several times annually, I set myself month-long challenges where I draft a poem every day. I typically spend the first seven days or so writing a lot of very obvious poems, after which I run out of “normal” ideas and the very weird and interesting stuff starts coming out.

The inspirational value of snow. I started writing the poems that became Share the Wealth after moving to Maine. Before that, I’d lived almost my whole life south of the Mason-Dixon line, in areas where any snow that does fall melts quickly. Here, not only does it snow a lot, it keeps piling up until spring. But the landscape doesn’t feel bare, somehow. Winter in Maine is at least as lush as summer, in a funhouse mirror kind of way.

I approach revision . . . slowly. My first draft of a poem is often 90% of the way there, and then I spend 90% of the total time working on the other 10%. Often, the part that is trickiest for me is the ending, and especially trying to resist an ending that is too pat and tied-up. There are at least two poems in the book for which I only was able to find the final lines two or three years after drafting the rest of the poem – which remained unchanged.

I also revise in small doses at a time. I rarely sit down and try to do a wholesale re-write of a poem. It’s more like having a jigsaw puzzle where you try to slot in one of the loose pieces every time you walk by, rather than sitting down and doing the whole puzzle at once.

There’s a lot of food in the book, particularly fruit. While there’s a pear on the cover, I cook more often with apples. So, here’s a recipe for one of the easiest and best apple cakes I know: https://smittenkitchen.com/2012/01/apple-sharlotka/

READ MORE ABOUT THIS AUTHOR: https://www.maureenthorson.com

ORDER THIS BOOK FOR YOUR OWN TBR STACK: https://veliz-books.square.site/product/share-the-wealth-by-maureen-thorson/58?cs=true&cst=custom