TBR: The Gleaming of the Blade by Christian J. Collier 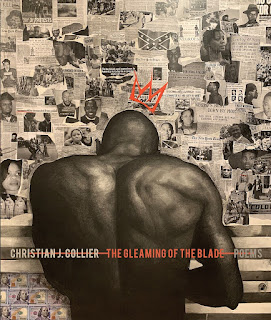 In my opinion, my work is interested in intimacy and interrogation. My work tends to focus on exploring the parameters of a subject in a way that both involves the body and the world beyond it.

I don’t know if I really have any boundaries when it comes to my creative work. If anything, I’m interested in granting myself more permissions and possibilities to work with, so I think that’s a more apt lens.

My friend Donna Spruijt-Metz attended a workshop with Patricia Smith a few years ago and told me about some of the rules Patricia uses when writing and revising, and I thought that was a great way to set one’s table, so to speak. As a result, when I committed to revising the manuscript before sending it out into the world again, I had established a set of rules to follow: each piece had to have a degree of risk, something I didn’t originally expect to say, and I wanted to allow myself to be a little bit dangerous to get at some truths.

I think that freedom comes from an amalgamation of the people I’m both influenced and raised by. One of the phenomenal things about being inspired by someone else is it grants you certain freedoms to try different things. A large part of my life has been populated by artists who aren’t timid, and I didn’t want the work in this project to shy away from the ways it interrogated race, the South, etc.

I think the lowest part of the book’s journey to becoming a book was before it received the Editors’ Selection from the 2021 Frost Place Chapbook Competition. There’ve been several times prior to this year that I felt close to having the manuscript in a place where it made a cohesive statement and seemed fully formed, and I’ve later realized that I was wrong. The manuscript was a finalist for another competition prior to it being accepted by Bull City, and in that span of time, I felt a little discouraged. One of the things I worry about artistically is if what I’m making is really hitting the marks I want, and even though I’m certainly not new to rejection, from time to time, it does take the wind out of the sails.

As for the highs, they keep coming. I’ve been stunningly blessed over and over this entire time. Bull City has been one of my dream presses for ages, so the fact that Noah and Ross loved the book and wanted to help bring it into the world means a great deal. Having Dr. Destiny O. Birdsong, Charif Shanahan, and Bao Phi blurb the book is an honor. Nate Austin agreeing to let us use his incredible artwork for the cover is amazing. I think, to try to tie it all up in a relatively succinct fashion, the people who’ve blessed and continue to bless the book and me with their time, attention, enthusiasm, etc. is the ultimate high though.

For the past few years, my favorite piece of writing advice has been to write into surprise. I don’t write in a linear fashion anymore. Most of the time, I’m initially just putting things down and moving words and sentences around to try to find patterns that sound interesting. From there, I’ll continue moving things around until, eventually, I find a way into and through a poem that I wouldn’t have found had I been trying to actively dictate where it was going. It’s a very brain off/ instinct on kind of affair, which I enjoy because it keeps my internal editor out of the equation until he’s needed.

There’s a saying that if there’s no surprise for the writer, there’ll be no surprise for the reader, and I believe that. Working in this method has allowed me to write from a place of surprise every time, because I don’t know and can’t anticipate where the poem is going or what it wants to say for much of the process. It’s also allowed for way more interesting poems, too.

So much surprised me about the way this book took shape. I have a bit of distance now that’s allowed me to see the book in a different light. I’m sure my answer will change (which is a good thing! It means I’m finding new surprises), but right now, I realize how much of the finished product came from completely new poems. A few poems in the initial version of the manuscript had to be cut, and I was asked about other work that we could consider. I’m not a writer who has an abundance of pieces, and I tend to work more with a particular theme or project in mind, but four pieces I either envisioned for something completely different or hadn’t considered being in the collection at all ended up being added. Without those poems, I think the book misses something vital, so I’m very pleasantly surprised by just how much they add that I never realized earlier.

What was your experience ordering these poems?

I used the same methods for ordering the version of the manuscript Bull City accepted and the one in that appears in the final book version. When we decided to cut a few pieces and add others, what the book was saying and how it was saying it changed a little bit.

I like playing music that captures the tone of the work and just being surrounded by it. When I ordered the poems the last time, I had Kris Funn & CornerStore’s version of “Who They Wish I Was” by Christian Scott Atunde Adjuah on repeat. I laid out all the poems and a few maybes around the apartment and went to work. I know it’s common for poets to try to put the strongest poem first in a collection, but I like poems that introduce you to a world to kick things off, too. From the very beginning, the first poem in the chapbook sets the tone, and I love that.

Also, I implemented the last line-first line strategy where I’d look at where a poem ended and see how it worked with the first line of the next poem. I think, because of that, the chapbook kind of feels like a conversation or one big piece, and that interests me. It feels more like a concept album to me than, say, a mixtape, if that makes sense.

This is an amazing question! I wish there were some foods associated with the book. I can definitely recommend some alcoholic drinks that would pair well with reading the book as well as some musical selections though.

ORDER THIS BOOK FOR YOUR TBR STACK: The Gleaming of the Blade by Christian J. Collier – Bull City Press

READ A POEM, “When My Days Fill with Ghosts”:  http://haydensferryreview.com/christian-colliers-when-my-days-fill-with-ghosts