TBR: How to Survive a Human Attack: A Guide for Werewolves, Mummies, Cyborgs, Ghosts, Nuclear Mutants, and Other Movie Monsters by K.E. Flann 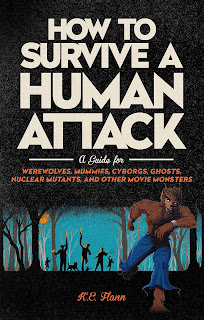 Did you know human attacks account for a staggering 100 percent of premature deaths for witches, swamp monsters, cyborgs, and other supernatural, mutant, and exceptionally large beings? How to Survive a Human Attack provides critical information at a critical time with chapters specifically tailored to their target audience.

The chapter that proved the most challenging was the survival guide for mummies, which, like mummies themselves, transformed many times, through epochs and incarnations. It began as a short story published in Monkeybicycle. Then it became a graphic novel script for a while when I thought that maybe a graphic novel was what this book wanted to be. Then, it became a prose survival guide that, frankly, didn’t quite work. It finally came to fruition when I thought, What is a mummy’s fundamental problem? And I thought, at its heart, it is one of security. Humans break into the tomb over and over again, all through time. What would put an end to this? The chapter finally came together when it became an instruction manual for the Third Eye Tomb Security System, which is like a Ring Doorbell powered by the Astral Portal.

This project began when my husband was watching "The Walking Dead" in the other room, and there was so much screaming. Those zombies were getting slaughtered! Someone should really help them, I thought. I wrote a short advice piece for zombies, and it got published quickly. Pretty soon, I started to suspect there were a lot of monsters that needed help. I wrote a few more and had those published. Then, it seemed natural to think about a book, and I drafted a proposal. The agent I had at the time wasn’t interested, and I sought out someone to represent it. The agent I found really loved it and worked hard place it. We took a break for a while and worked on other things, and then circled back to it a few years later. In that time, the world had changed. For better or worse, audiences now are perhaps ready to view humans through an “antagonist” lens. They say timing is everything.

As simple as it sounds, I can manage my fears and questions about projects by devoting time and attention to the work. I need to repeat the advice to myself because it so often doesn’t seem true that doing the work is getting me anywhere.

I had never written a book that had been accepted on a proposal. I imagined the “bird in hand” commitment from a publisher would be reassuring, but it was scary. I didn’t want to let them down. What surprised me was that I took risks creatively, in spite of the anxieties, letting the project get just as weird as each monster in terms of voice and structure. Maybe terror was the right motivation for this particular project.

What readers won’t know until they crack it open, is that the book’s interior features many illustrations by the incredible Joseph McDermott. There’s a retro style to his depictions, as exemplified by the cover art. I had a clear visual interpretation of this book, and it was almost as if he could see into my head. He’s got supernatural powers. I can’t wait for people to see “Swamp Monster Makeovers.”

There’s a recipe in the chapter entitled “The 6(66) Habits of Highly Successful Witches.” An incantation does accompany the recipe. However, replicating it here would amount to pulling the pin on a grenade, so I probably shouldn’t share it. It’s only for witches.

Boil this potion, removing scum from the surface. Rub on your face.

Dosage: Dollop the size of a big toe

READ MORE ABOUT THIS AUTHOR: http://www.kathyflann.com

"Appendix 1: A Compendium of Human Repellents"https://drive.google.com/file/d/1_zp_1rU0tS0cjMnvbtHTjmjKBqoDHh-s/preview