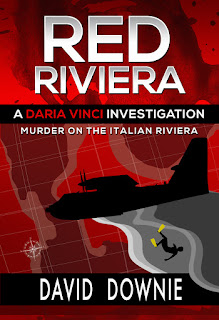 Dateline Portofino: a hot, clear April morning on the Italian Riviera, wildfires burning everywhere. An aging superrich former CIA operative of Italian origin disappears while swimming as the water-bombers circle overhead then dive to scoop up seawater to dump on the fires. Commissioner Daria Vinci of DIGOS—the Italian FBI—is called to the scene by another aging former spook and finds herself entangled in a uniquely Italian-American imbroglio.

This is the first Commissioner Daria Vinci Investigation. Daria looks set to have a long and adventurous life fighting crime, sometimes where she least expects to find it—within the police and military hierarchy, for instance. She’s a complicated, paradoxical character and I fell in love with her as she came to life on the screen of my laptop. Like certain real-life people I know and love, Daria is strong, determined, opinionated and seems armor-clad. Yet she is surprisingly idealistic, sensitive and romantic. Does the hard-soft contrapuntal nature of her character arise from her mixed-up background or maybe her long martial arts training?

She has a number of things in common with the author. He happens to be of the male gender though he likes to think he’s adept at insinuating himself into people of all types, all genders, all backgrounds. He practiced Goju Ryu Shorei-Kan karate for decades—the “hard and soft” style of karate. Daria has done other forms of martial arts but the outcome seems to be similar.

Daria is genetically half-Italian and half-American, also like her creator. It’s not that she’s got divided loyalties—she’s loyal to both her countries. She’s also plagued by the constant need to question received-wisdom and many rules and regulations. This often lands her in trouble, and damages her career. Again, in this way, she’s like the author.

In Red Riviera, Daria definitely asks a few too many questions and gets answers she doesn’t accept and, yes, she gets in trouble. That’s going to be a pattern with Daria Vinci, I’m afraid.

So, Daria was the most challenging character in the novel to create, the one I care most for, though I will add that I also really loved inventing the hundred-year-old marquise, and the nonagenarian former Dutch spy and fighter pilot, and Daria’s sidekick, Inspector Osvaldo Morbido… The book is fast-paced and several early readers tell me it’s unputdownable, but I’m very proud to think it’s also very much character-driven.

The longer story is, I was underwhelmed by the way a number of the publishers with whom I have had relationships in recent years handled my latest books. Communications were often slow and intermittent, there was a lack of initiative or flexibility and feeling of unwieldy bigness. The bigger the publisher, the bigger the overhead, the bigger the pressure on editors to buy and promote big-selling books and let the midlist slide.

A pair of friends (who, like me, are veteran writers) had been working happily with Alan Squire Publishing (ASP) for years. They put me onto ASP. Happily, my editors fell in love with Daria and Red Riviera. So far it has been a huge pleasure to be on their list. As Napoleon’s mother famously said—“Pourvu que ça dure!” which means, essentially, “Let’s hope it lasts!”

Wow, so many things surprised me that I wouldn’t know where to start. Daria and the other characters in Red Riviera took shape as if conjured and then they ran wild. I had a hell of a time keeping them under control. It’s as if they were really alive and simply refused to obey the will of their creator.

Also surprising, I discovered that some of the things I had dreamed up and considered pretty outlandish were not only feasible but had actually occurred. Water-bombers do sometimes scoop up things—I won’t go into detail—other than water. Ancient Roman shipwrecks have been found exactly where I said one would be—a year or more after I’d finished writing the novel. The character I based the marquise on did in fact turn a hundred years old after I’d written the book and before its pub date.

The title Red Riviera found me. I was on the Italian Riviera—that’s where I spend part of each year and have done since the 1980s. The sand blowing over the Mediterranean from North Africa in the sirocco wind was red. The hillsides were red from blazing wildfires. The flame-retardant chemicals being dropped by the Canadair water-bombers were red and left a red powdery stain on the landscape. The bougainvillea vines growing everywhere had red (or purple) blooms.

Lastly, red used to be the color of communism everywhere, right? Reds, pinkos? (That’s one reason I never understood the GOP’s adoption of the color, though I admit, I understand nothing about the GOP, most of all its continued existence). Italy had one of the world’s biggest communist parties and one of the strongholds of communism in the country was Genoa. Genoa is the capital of Liguria, the official name of the Italian Riviera. There has always been this juxtaposition of Genova la rossa—Red Genoa—and the black, fascistic, rich, glitzy Riviera spreading on either side of the big old industrial city. Then the politics shifted in the 2010s and the colors got muddled and everything started to look black and mottled and stained blood-red. At least, it did to me.

Daria Vinci is lanky and thin and eats like a horse. One of her favorite foods is focaccia, particularly the kind from Genoa and the Eastern Riviera—Rapallo, Santa Margherita, Recco. She gobbles multiple slices daily and guess what? She never puts on weight. Now, it just so happens that her creator has authored several cookbooks and food/travel or food/history books. He also loves focaccia. It’s really hard to make well in a home oven. But here’s a recipe that works, taken from my book Enchanted Liguria: A Celebration of the Culture, Lifestyle and Food of the Italian Riviera (Rizzoli International).

The focaccia may be topped with fresh rosemary, sage or very thinly sliced onions just before baking.

Generously oil a round or rectangular baking pan (the largest that will fit in your oven), preferably one with a thick bottom. Stretch the dough into the pan, pressing down firmly with your fingers to make indentations every ½ inch. Mix a pinch of salt with about 3 tablespoons water and 3 tablespoons oil. When the salt has partially dissolved, drizzle the mixture over the dough and work it into the indentations with your fingers.

READ MORE ABOUT THE AUTHOR:

ORDER A COPY OF THIS BOOK FOR YOUR OWN TBR STACK:  https://alansquirepublishing.com/bookstore/red-riviera/