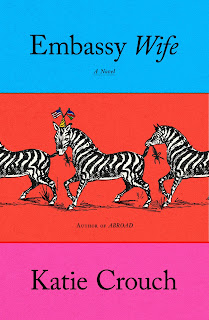 Amanda Evans and her children leave everything to move to Namibia for her husband’s job, only to find out he’s come to Africa for other reasons.  Meanwhile, her new friend Persephone is convinced her State Department husband is a CIA agent. The two get involved in an international crisis. Hilarity ensues.

Which character did you most enjoy creating? Why?

Persephone Wilder. She’s long-time State Department wife, and one of those terrific ladies you meet who are NEVER WRONG. Anytime I get to write about a misguided character, I get excited, because there’s so much to play with between their perception and reality. She’s also very glamorous and drinks too much.

Amanda Evans. I needed her to be steady because Persephone’s so extravagant and all over the place. But she couldn’t be flat! My answer was to write fifty-ish pages of backstory, so I could really know her. I cut most of those out.

My original editor left my publishing house before anyone saw this. I’d recently published Abroad, which was very different. I was really worried about what would come next.

Then I had a baby at forty-three and moved to Namibia in real life with my own family. Any time I had to sit around being anxious about what an editor I’d never met might think of a book I hadn’t written…well, those hours evaporated.

Happily, living abroad gave me a lot of ideas, and I went full throttle on this for a year or so. My new editor really liked the book! So here we are.

Turn off the Internet.

I had no idea how I was going to figure out the plot threads I’d started. And there are kind of a lot. But then my characters just sort came up with answers.

I am endlessly surprised and delighted by the power of the subconscious.

What is something you would like readers to know about the book?

State Department life is not always elegant. The families of the diplomats I met had to sleep in bedrooms that were gated off and locked from the rest of the house, as to ward off night attackers. They called it the “Safe Haven”.

So, if you ever meet an American diplomat, thank them for their service! They’re out there helping to broker world peace. And it’s not all fancy dinners.

(Though it sometimes is. I went to some.)

In Namibia, tea shops are popular little places to get a coffee and a pastry. There’s just a lot more time there somehow to sit and chat. These shops all serve “meltert”, or milk tart. It’s basically a super creamy custard pie.

If life were fair, I would be able to crawl into a milk tart and take a long, sweet nap.

Here’s a recipe for the filling. I never met anyone who bothered with the crust. Those we bought pre-made at a store called Woolworth’s¾not the American version.

BUY THIS BOOK (with a signed bookplate) FOR YOUR OWN TBR STACK: