TBR: In the Quick by Kate Hope Day 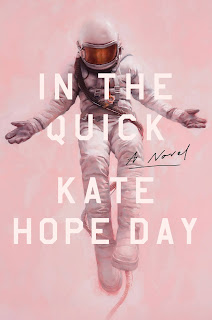 A young, ambitious female astronaut’s life is upended by a fiery love affair that threatens the rescue of a lost crew in this brilliantly imagined novel in the tradition of Station Eleven and The Martian.

The main character June is closest to my heart. When I began developing the idea for the novel, I knew I wanted to write a first-person narrative, so I needed a main character with enough distinctness and agency to carry the whole novel. I thought about my favorite characters, the ones who are still present in my mind years after I first encountered them, who I go back to again and again. They all seemed to share a peculiar quality: they were the characters who got in their own way, who created hardships for themselves simply by being who they were. They couldn’t help it, and you loved them and you shook your head at them at the same time. For me Jane Eyre is quintessential example, but there are so many great ones! Lisbeth Salander, Becky Bloomwood, Arthur Less, Fleabag. I was taken with the idea of a character who is brilliant and difficult, sometimes hard for other characters to like, but impossible for the reader not to love.

The book spans June’s life from when she’s a twelve-year-old girl to when she’s grown up and become an astronaut. The most challenging part of the book were the early sections where I had to work hard to make her voice authentic for the age she was at that moment—and also right for where she was in her development over the course of the novel.

This is my second novel and it was written under contract, so unlike my first novel If, Then, I had a deadline. I worked well within those confines and liked knowing who would be reading when I got to a final draft—my fantastic agent Brettne Bloom and my wonderful editor Andrea Walker at Random House. I had finished edits on the book when the pandemic hit, but I will say it was a challenge completing copyedits and first pass proofs while simultaneously supervising one kid doing remote school and homeschooling another. I hope I never have to do that again!

The most important advice for writing a novel is to do something every day to keep the project “alive.” This is along the lines of “touch the work every day,” but I don’t think you have to open the document and write every day. You could also read draft pages, do free writes, work on an outline or character arcs, reread bits of your favorite craft books, read other novels that are doing something similar to yours in terms of place or character or structure, or just simply think about your characters and what they want when you’re doing other things.

I was surprised that my initial idea for June (who had lived inside my head for almost a year before I started writing) stayed consistent from one draft to the next. Every other part of the book changed and evolved, but the most important parts of June’s character—her intelligence, her stubbornness, and her perseverance—stayed the same.

When I’m writing and I get stuck, or just aren’t feeling inspired, one of the things I do is to write down a couple of key words for the scene or character I’m working on, and look them up in my two volume edition of the Oxford English Dictionary, read their definitions and etymology, and jot down anything interesting. A word I associated with my main character June was quick; she’s very sharp intellectually, but also quick tempered and impulsive. When I looked the word up I was reminded that as a noun it also means “characterized by the presence of life,” as in the phrase “the quick and the dead,” and the “tender flesh of the living body, esp. under the nails,” as in the phrase “nails bitten down to the quick.” The word seemed to strike at the heart of what I was trying to do with the book thematically—the ways I wanted to depict the human body as vulnerable in the punishing setting of space. I knew I wanted to have it in my title, but as I read further down in the OED definitions, I got the idea to create an additional fictional meaning.

This imaginary definition prefaces the book: “QUICK, n. Informally, as by astronauts: the final minutes of life before total oxygen deprivation: in the quick.”

When June is living in an orbiting space station (similar to the International Space Station), her crewmate Rachel makes a version of a breakfast burrito with powdered eggs, reconstituted mushrooms, and hot sauce. Fun fact: According to Mark Kelly in his memoir Endurance (which recounts his year on the International Space Station), the food that disappears the fastest on the ISS are the breakfast burritos.

READ MORE ABOUT THIS AUTHOR: