TBR: The Baddest Girl on the Planet by Heather Frese 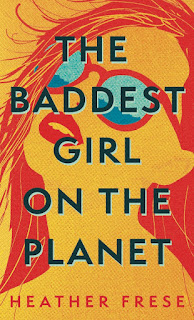 Evie Austin, native of Hatteras Island, NC, and baddest girl on the planet, has not lived her life in a straight line. There have been several detours—career snafus, bad romantic choices, a loved but unplanned child—not to mention her ill-advised lifelong obsession with boxer Mike Tyson. This is the story of what the baddest girl on the planet must find in herself when a bag of pastries, a new lover, or quick trip to Vegas won’t fix anything, when she must learn from her relationships but also look within to navigate the decisions and turning points in redefining a new notion of herself.

I loved creating Evie, my protagonist. Much of my writing previous to this project was descriptive to the point of being cinematic, the old “show, don’t tell” thing. But Evie was very voice driven. I found that, instead of stepping back to describe what Evie was seeing or feeling, she’d just say it, but the way she’d say it spoke volumes. She was so much fun to write. Evie’s ex-husband, Stephen, gave me the most trouble. I was so firmly on Evie’s side that initially he came out as a one-dimensional bad guy, so I worked really hard to round him out and give him his own backstory and reasons for behaving the way he did, including a shot at redemption toward the end of the book.

In the middle of the project, way back when, I had a workshop with the author Janet Peery, who was incredibly supportive and said something like, “this is going to get published,” which gave me some much-needed confidence to actually pursue publication. I got an agent fairly quickly when the project was done, but that elicited a whole lot of “we really liked this, just not enough to publish it” responses. In the meantime, I was getting married and immediately pregnant and quickly found myself sucked into the undertow of parenting an infant/baby/toddler, then a toddler and an infant concurrently as child #2 arrived. I started looking at contests and small presses that seemed like good fits. Several rejections later, I was a semi-finalist at a small North Carolina press I admired. This was exhilarating and gave me a boost of hope, but the book ultimately didn’t move on to the finals. I was crushed, honestly. It had seemed like such a good fit. I found one more contest, for the Lee Smith Novel Prize at Blair which, strangely enough, had been my favorite press as a child because they published my beloved Taffy of Torpedo Junction, set on Hatteras Island, same as the book I was submitting. And Lee Smith was my favorite author. So, I scanned through the manuscript one more time and sent it in. It was the only place I had it submitted, and in my head, I figured if and when it got rejected, I’d tear the whole thing apart and put it back together in a more traditional, linear form, once all the kids were in school and I had more time to write.

And then, I kind of forgot that it was out at a contest. I was in the throes of magnet school selection for the oldest and preschool for the youngest and then, in a surprise twist, pregnant again. Months later, when my phone rang with a North Carolina number, I was in a cold and dirty McDonald’s play area, the baby strapped to my chest as the older two shouted at me to watch them go down the slide, when I heard that Baddest Girl had won the Lee Smith Novel Prize. Everyone at Blair has been amazing. I felt like they really saw and understood what I was trying to do with the project, and they were incredibly supportive and understanding about working with small children hanging about.

The final twists: I’d spent years establishing a community and support system and I’d planned to really reach out to all my friends for help with the kids when my edits came in so I could completely focus, but the pandemic hit at the same exact time. I edited in fits and starts around 24/7 kids. Then my release date got shuffled around a bunch as the pandemic’s effect on publishing became clear. But I think, barring any pandemic-mail disasters, the release is finally going to happen. So, yes, wow, highs and lows.

My professor grad school would tell us, via a critic of Eudora Welty, “Always get your moon in the right part of the sky.” I take that one to heart and try really hard to keep my little details correct.

The first surprise I had was that I didn’t want to stop writing this character. I initially just wanted to do a short, fun, voice-driven little piece, but Evie’s complexity unexpectedly captured me. Another sad surprise I had was when I casually typed out that Evie’s beloved Aunt Fay had died. This led me to do a whole chapter on her funeral. And then I found myself surprised by feeling some sympathy for Evie’s ex-husband.

The title is a play on Mike Tyson’s nickname “The Baddest Man on the Planet.”

Evie meets Mike Tyson when she’s a little girl, back when he was a famous boxer before any other incidents came to light. His downfall corresponds with the onset of her bad reputation, or at least it does in Evie’s mind. I’d wanted to title a chapter “The Baddest Girl on the Planet” but none of them fit, then my best reader/friend/writing soulmate suggested it as a title for the whole book.

Historically, Hatteras Island has been extremely isolated (it’s literally a sand bar in the middle of the ocean), so traditional recipes tend to feature what was readily available, usually seafood. Hatteras Style Clam Chowder is a notable Outer Banks staple. It features a clear broth plus fresh, local clams and vegetables. Figs also grow locally; I’ll include a fun recipe for Hatteras Fig and Whiskey cake that was featured in Our State magazine for dessert!

Little neck clams are considered the best. They’re the smallest and are thought to be the most tender. Whether it’s a little neck, cherrystone, top neck or quahog, they’re all the quahog species of clam. It’s just a question of size.

If going for fresh, about 100 little neck will be needed. Chowder clams (top neck) are larger.

3.    Bring to a boil until potatoes are tender crisp.

Many recipes call for sautéing the onion in the bacon grease first. Classically only salt and pepper are used to season this.

For a little different flavor, fresh thyme adds a subtle herbaceous touch, and more bacon can also be added if preferred.

Preheat oven to 325°. Grease and flour a 10-inch tube pan. In a large bowl, cream together sugar, eggs, and oil. Stir in vanilla. In a small bowl, sift together the flour, salt, soda, and spices. Alternately add dry ingredients with buttermilk to egg mixture, mixing well. Beat in fig preserves, nuts, and whiskey. Pour into the prepared pan, and bake for about one hour, or until an inserted toothpick comes out clean. Cool on a rack, then remove from pan. Serve warm.

READ MORE ABOUT THIS AUTHOR: www.heatherfrese.com

Email ThisBlogThis!Share to TwitterShare to FacebookShare to Pinterest
Labels: Making Myself Hungry, Send Out Your Work, Small Presses, TBR [to be read], The Marketplace, What I'm Reading
Newer Post Older Post Home