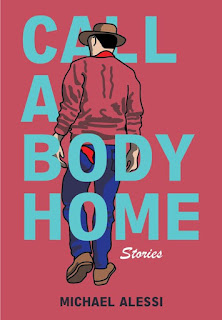 The stories of Call a Body Home explore the borderlessness between nature, violence and memory against the Appalachian backdrop of Virginia’s Shenandoah Valley. Its characters are working class parents, children and siblings struggling to maintain the familial ties and traditions that bind them together, even as time and trauma threaten to uproot them. By turns savage and soulful, Call a Body Home offers a portrait of the modern South and how we fight through hardship and grief to find a way home.

The opening story of the collection, “Shrimp of the Dirt,” was the most pleasurable to write. I’m a sucker for stories centered around animals and natural phenomena, and this particular story, which revolves around two cicada emergences, gave me an excuse to do research on the ecology of the Shenandoah Valley where I grew up. It’s one of my favorite pastimes. The story also contains a few moments that are deeply personal to me, including the game described in the second section, which is based on a real game my mother played with me and my twin sister when we were children.

The story that took the most work was “Texaco Station.” Writing convincingly from a child’s perspective seems simple enough on the surface, especially if our first inclination is to present that point-of-view as limited, but the reality is of course more complex. Children are hardly limited in their ability to perceive deeper truths. It’s their ability to communicate these perceptions and turn them into agency that might be limited. On the latter point, I had to revise the ending several times before I was satisfied enough to leave it alone. Without spoiling anything, it rhymes with the ending of the story that comes before it, which I hope makes it feel as though the two moments are speaking to each other.

The biggest challenges with a manuscript like this one were 1) recognizing that it should be a chapbook, and 2) finding a publisher willing to take a chance on a very short collection of stories. While the chapbook has a rich history in poetry, it’s certainly less common for prose writers to publish very short collections, though things are starting to change. Call a Body Home began as a full-length collection of stories, but as I revised the project, I began to obsessively cut out stories I wasn’t satisfied with and shorten those that remained. At first, I was dismayed: even though it felt like each new, shorter version of collection was tighter and more cohesive than the one before it, it also felt like I was getting farther and farther away from a length where the project would be publishable.

That feeling changed once I attended a reading by Kathleen Rooney shortly after Lillian Boxfish Takes a Walk was released. She shared some advice that helped her as both a writer and publisher (at Rose Metal Press) who often works in shorter, experimental prose: approach the world of publishing not as a ladder you have to climb to place your manuscript with the largest possible venue, but rather as an ecosystem of lily pads, big and small, that you can hop between, depending on which venue is the best fit for your project. If you look at her career, she’s been prolific in publishing books across a wide range of genres and lengths this way, and recognizing her success gave me the confidence to stop conforming to the standards I imagined a larger publisher might want in a project, and instead follow my gut, cut the manuscript down to its simplest form, and hope to find the right lily pad. It took some time to do both, about 2 years, which was probably the low point in the journey.

There are maybe a half dozen independent presses that consider chapbook-length collections of stories, and I count myself as extremely lucky to have worked with Mason Jar Press. Michael Tager, Ian Anderson, and Heather Rounds are compassionate readers and supremely talented at what they do, and they quickly became champions of my work and my vision for the collection, which they picked as the winner of MJP’s 5th anniversary chapbook contest. Getting that news was certainly a high, even if the pandemic upended everything just a few months later. Throughout all the challenges this last year posed, Michael, Ian, and Heather went out of their way to make me feel deeply involved in each step of the publishing process. I’m beyond grateful to them for their help in bringing Call a Body Home into being.

This is going to sound bizarre, but it’s “Don’t forget to make your drug dealers do the dishes.” You could insert any personal or professional title into this phrase, but this is the version I received from my first mentor, Hanna Pylvainen, in the context of an undergraduate workshop discussion about a story where the characters behaved purely as facilitators of plot. Her point being: your characters are meant to behave like people, so take the time to get to know them through their everyday routines, however ordinary they might seem. The action doesn’t have to be remarkable for you to discover specific and surprising truths about your characters.

Another piece of advice from the same workshop: “Your competition is the laundry.” Readers have their own chores and routines that might threaten to interrupt their reading at any moment, so the onus is on you to keep them engaged. When it comes time to revise, it helps to ask yourself the question, “Is this scene/paragraph/sentence going to hold the attention of a reader who is also thinking about the laundry they have to fetch from the dryer?”

There were a few times where I got to that point, but one moment that stands out came at the end of “Goshen Pass” where I describe one character touching his wife’s scars, with his fingers “tracing their topographic map of a valley, searching for a sign of home across a distance too great to tell.” That line wasn’t anywhere on my radar when I was writing the scene, but it emerged more or less as written, and changed the way I saw the story. Once I had that line, the characters, and the larger questions of the collection about home, belonging and grief, all clicked into place. For that reason, I arranged the sequence of stories so that “Goshen Pass” sits at the heart of the book.

I’ve always struggled when it comes to titles. Call a Body Home takes its name from the second story of the collection, which didn’t even have that title until just before I submitted the manuscript to Mason Jar. Originally, it was titled “Sow.” I was looking for a title that could give voice to the themes of the collection, one of which is the pull of home, which is especially strong in the Appalachian mountain communities I write about. There’s a moment where the character at the center of the title story, a girl who has been left behind with the rest of her family after her mother runs off, experiments with “testing gestures, such as slapping her brother when he tells her to chew with her mouth closed, hoping to find one that might summon their mother back from her new home.” That desire— to call her mother back home, to be made whole with a family and an ancestral place—rhymed with the imagery contained in the last line of the story, and once I saw how the former motivated not just her character, but a majority of the characters in the collection, I realized that it had to be the title. I like that it carries more than one meaning—it can refer to both the act of calling a person home, and finding that home within ourselves.

In the first story, “Shrimp of the Dirt” (linked below), I mention a few simple cicada dishes. Here’s a recipe courtesy of Richmond chef John Seymore:

30-40 cicadas (gathered as they emerge from the ground, remove heads, legs and wings)

Salt and pepper to taste

In a small saucepan, bring 2 cups water to boil. Add cicadas and boil 4-5 minutes. Drain and set aside. Grill peppers and onions until al dente, season with salt and pepper. Set aside.

Serve over grits as a substitute for shrimp.

READ MORE ABOUT THIS PUBLISHER: http://masonjarpress.com

ORDER THIS BOOK FOR YOUR OWN TBR STACK: http://masonjarpress.com/chapbooks-1/call-a-body-home

READ A STORY, “Shrimp of the Dirt”: http://www.ninthletter.com/winter-20/winter-20-fiction/393-alessi