TBR: Bride of the Sea by Eman Quotah 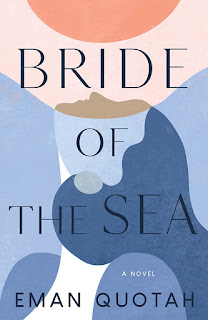 A young Saudi couple moves to Cleveland to study in the early 1970s. When they divorce, the wife fears her daughter will be taken from her because of Saudi custody law. She disappears with the little girl, and the husband is left to search for his lost daughter.

I loved writing Haleemah, who is the mother of Muneer, the young husband. Haleemah is loosely based on my grandmother and women of her generation. My grandma was illiterate, a child bride, had 12 children. As the matriarch of our large family, she was loving and sweet but also sometimes petty and willing to pit one of her children against the other. In an early draft, I wrote a whole section from her point of view, and although later that section ended up being told in Muneer’s point of view, I was really able to get to know her.

Saeedah, the young wife who abducts her own daughter, was the hardest for me. Unpacking Saeedah’s motivations was such a challenge and a process. She’s one of the reasons this novel needed time to germinate. I wanted people to see the deep trauma her actions caused for Muneer, their daughter Hanadi, and others, while at the same time not painting her simply as a villain. That was hard!

I started Bride years ago when I first learned of a family friend’s reunion with his daughter, long after she’d been abducted by her mother. I workshopped some of the early pages but I never got real momentum, and then I set the book aside to work on another novel. When I finished that manuscript, I scrapped everything I’d written on THIS one and started over. That’s when I slowly started to figure out how to interweave the three perspectives of Hanadi, Muneer and Saeedah.

While my agent, Steven Chudney, and I were submitting the manuscript to editors, I ended up reworking it because of feedback we got. So, there’d be a low of “I need to rethink X and Y” and a high of “Eureka! I think I’ve got it.”

Tin House acquired the book last March, the same week my kids’ schools shut down because of COVID-19. It was a thrill to find Bride a home at such a well-respected indy house with an editor, Masie Cochran, who really loved it. Of course, back then I thought that by early 2021 we’d be back in person, but it’s still enormously exciting to have my first book coming out, no matter the challenges.

My favorite piece of writing advice is not about novels at all, it’s about opinion writing. Former USA Today opinion editor John Siniff told me, “If no one would argue against it, it’s not an opinion.” Here’s how I translate his advice for fiction and essay writing: Don’t be safe, and find the things that only you can say.

The ending surprised me. I had long envisioned a particular way of ending the book, and then my editor suggested that I cut the last 20 to 25 pages. Now I think the place where the reader leaves the narrative is perfect.

The book’s title is the nickname for Jidda, Saudi Arabia, where I grew up. I can’t remember exactly when I decided on the title, but it’s so poetic and speaks to so many of my novel’s themes. For me, the title also evokes the regional identity of the Hijaz, the part of western Saudi Arabia where Jidda is located.

Food definitely helps me tell the story and reveal the themes of Bride. As newlyweds, Muneer and Saeedah try to make their mothers’ rice and lamb recipes, and how they go about it tells us something about their marriage. Then, when mother and daughter are on the run in Ohio, Hanadi watches Saeedah make the Saudi version of shakshuka, but to Hanadi it’s just tomatoes and eggs. She doesn’t know the cultural significance of it. And when Hanadi finally meets her paternal grandmother in Jidda, the first thing Haleemah does is feed Hanadi, as though it’s Haleemah’s way of speaking her love across languages and making up for lost time.

Chop ½ onion (or a whole one) and sauté in olive oil until soft. Meanwhile, peel a tomato (or two) and squeeze out the seeds and juice. Chop the tomato and toss in the pan. Sauté until the tomato thickens a little. Add two to three beaten eggs. Season with cumin, salt, and pepper. Swirl with a chopstick or spatula as the eggs cook. Eat with pita, white cheese, and zaatar.

READ MORE ABOUT THIS AUTHOR: http://emanquotah.com

READ AN EXCERPT, “You Drive Me Crazy”: https://themarkaz.org/magazine/you-drive-me-crazy-from-bride-of-the-sea