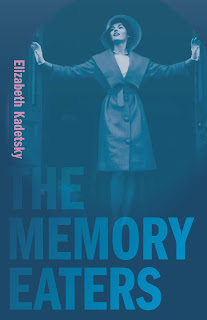 Through Jewish and French Canadian family stories, meditations on my family’s glamorous past in 1970s and 80s New York City, and the tale of caretaking my vibrant and charming mother with Alzheimer’s while confronting my sister’s drug addiction, I explore memory: tyrannical in trauma, compulsive in nostalgia, and tragic when lost. Through this lens, my memoir unravels dazzling ancestral myths and damaging family secrets, and in the process explores the possibility of rewriting one’s own story to reconcile traumas both personal and generational.

My favorite to write was the first, “A Taxonomy of the Unknown,” which uses French Canadian genealogical research and my Franco American family’s personal mythology to get at the ethos that my mother created for me growing up, an ethos that in many ways preferenced the unreal, the romantic, and the wished-for to the real. Discovering that many hundred-year old family stories as well as archetypal French Canadian origin stories were suspect helped me piece together the larger themes of the book—that the stories that you make up for yourself can be as integral a part of your identity as what’s fact. Another thing I loved about this essay was that it took me about 20 years to understand the significance of genealogical records that I’d dug up in Quebec on a grant in 1997. Many people told me to look up those records—in Quebec this is a very popular thing to do, because the French Canadian genealogical record is nearly unparalleled in its endogamy and comprehensiveness. Ultimately, I was able to use the data to show the evanescence of genealogical “truths” and a practically complete family tree. I had over a thousand ancestral stories to choose from, but none of those stories was complete. In some ways, the data only allowed me to imagine my own story more richly, but in a way that I could see was more imagination than fact.

The one that gave me the most trouble also had its seed in the research trip that took me to Quebec in 1997, “Ghosts.” This grant also brought me to Maine and Boston to research my family history, but, subsequently, I had to research and write the essay several times. This was because, first, I lost the manuscript—a short story that I submitted for my graduate creative writing workshop. After the workshop, the carton containing the original manuscript and the copies with my peers’ and professor’s comments was mistakenly discarded during a move. Luckily, I still had my research notes and transcripts of interviews with family members, so I used them to piece together another essay which, seeming to lack something, led me on a subsequent research trip to re-interview several of the subjects on the mid 2000s. By that time my mother had Alzheimer’s and couldn’t answer new questions that the research unearthed, but by going through the research carefully and revisiting some pieces of it, I was able to unearth the family secret. Thank goodness I didn’t publish the earlier version of the essay, because unlocking the family secret also unlocked the significance of the story of the essay and its theme—transgenerational trauma. That, in turn, gave me the key to unlock the book itself. This was the last essay that I wrote before the book was selected for publication (I wrote one other after the fact). It was the Rosetta stone, really. Until then, I had a book manuscript that didn’t quite know what it was about. I’d written an adventure story, but its center was missing.

What boundaries did you break in the writing of this memoir? Where does that sort of courage come from? Tell us a bit about the highs and lows of your book’s road to publication.

In a sense, my story was too good a story—single mother, fashion model and 1970s New York City doyenne gets Alzheimer’s while living with dysfunctional grown daughter in a walkup in Queens and becomes charming and broke wander risk. Narrator must manage. It was Grey Gardens meets An Unmarried Woman—too easy. This narrative was seductive to both me and literary agents, and led me on the wrong path entirely. I wrote several versions of this book manuscript, and it was never very good. It wasn’t until I took a workshop with the editor Karen Braziller and read Vivian Gornick’s The Situation and the Story that I understood the central missing piece, that this had to be my story, not a story about other dramatic, interesting, and tragic characters. However, I was still tied to the advice that my writing, when not subjected to the utmost rigor, moved around in time and space too much. It moved in ellipses and spirals, and it kept repetitively going over the same material. What broke ground was perhaps that I finally gave in to my instincts to tell a story that mimicked the experience of traumatic and nostalgic memory, revisiting images and incidents, and shifting from different points in the past to different points in the present repeatedly. The latter—a shifting and non-chronological present moment—owed to the fact that I was writing the book while my mother’s condition was progressing, and then through her death and into the aftermath of grief—for me—and homelessness—for my sister. Over this present moment, episodes from the past would assert themselves in no particular order. In organizing the book, I struggled between ordering it according to the progression of events in the past or the progression of events in the present. Finally, I realized that the overlay of many pasts onto many presents revealed just the right the mind state for the book, and so I chose themes, instead, as an organizing principle. This in part came from advice by the writer Mira Bartok, who worked with me on a manuscript consultation. Mira’s book The Memory Palace also works in this way, so my structure is perhaps not exactly groundbreaking, but it does feel to be an essential and unusual element for so dramatic a plot. The courage of going with this non-traditional structure definitely came from failure. At a certain point of having worked on the book for so long and having had several agents but no book contract, there seemed nothing to lose in writing exactly the book that I wanted to write.

My favorite advice for writing memoir is an amalgam of Vivian Gornick’s “find the inner story” and John Gardner’s insight that all stories are about the transformation of a central character through an escalating sequence of challenges and tests. So, I ask memoir writers, how are you and not your subjects the central protagonist in your story? How are the stories that you are telling your story, and what do you—the protagonist—have to discover in order to change. What surprised me was how hard this actually was for me to do, and how, when I finally did, how obvious the answers were. My story was that I had internalized my mother’s central trauma, without even knowing what it was. Once I got to the root of it and discovered our family secret, I was able to see how that secret—and my mother’s shame and evasiveness surrounding it—had contributed to my own traumas and shame, and to dysfunctional systems in my family growing up. Discovering her secret give me the distance to see clearly not only her story, but mine.

My story felt very dramatic to me when I was experiencing it, but in connecting with readers and friends I’ve realized that most aspects of it are universal, and not just in a general sense. My ideal reader sees her or himself in my story. With the aging of the baby boomers, many grown daughters and sons who have led unconventional lives so far find themselves in the surprising position of having to take care of someone when they can still barely take care of themselves. Also, many people find themselves at the intersection of the opioid epidemic and the Alzheimer’s epidemic. The scheme that seemed so unworkable in my family—dysfunctional child is living with ailing parent and becomes that parent’s caretaker but is completely unequipped to do so, and other, functional sibling who has a full-time job must step in—is in fact, systemically speaking, inevitable. Another thread that will feel familiar to many readers is that when one or especially two family members are in crisis, the bottom falls out quickly and surprisingly, because in the U.S. there is no safety net. That my mother could not qualify for insurance-covered home care felt wrong to me in so many ways. That my sister lived with her only lessened my mother’s eligibility, whether or not my sister was functional. In fact, I was called by adult protective services to be told that my mother was in danger on the same day that another government agency rejected her for services. This inspires a kind of rage that others can surely relate to. I am not the only person who has been let down by social services, and, on top of that, to have an experience of extreme panic and distress along the way. The book, in its way, suggests a political agenda that I hope will connect with readers who see the grand scale of the problems posed by the Alzheimer’s epidemic (and opioid epidemic) and what they reveal about the shortcomings of our medical and social services.

My mother loved traditions, but they had to be made up, and this possibly explains the fact that our family celebrations invariably involved a cake that has no known origin in any of the traditions we actually hail from. This is Paschka, a delicious Russian Orthodox Easter cake that in our family was always made with a ricotta cheese base, and was set to mold in the refrigerator overnight in a flower pot—though we never had a garden, houseplants, or any other use for ceramic flower pots. We had to go out to the store to buy the flower pot each time (why we didn’t save one, I am not sure). Traditionally, this cake is decorated with the Eastern Orthodox cross, but my mother always decorated ours with pale purple-colored candied lavender from the nearby Hungarian shop on upper Second Avenue, Paprikash, and edible flowers such as nasturtiums—or inedible ones, because, why not? Like most things in the model’s diet, this one is extremely high in fat but not high in sugar—my mother used to eat buttered toast with a pat of butter on each slice and still stay thin.

Place egg yolks, cream, salt, and sugar in a saucepan and cook on low heat until they form a custard, about 10 minutes

Remove from heat, stir in vanilla

In a glass bowl, using a wooden spoon, combine ricotta and butter, and then add egg yolk mixture

Pour cheese mixture into pot; fold ends of cheesecloth over top. Place pot face up on a plate and place weights over the cheesecloth the help drain excess moisture through the hole in the bottom of the flowerpot

Refrigerate overnight, removing any water from the plate

Remove cake from flowerpot by upending it, and carefully remove cheesecloth. Decorate outside with flowers and candied lavender

READ MORE ABOUT THIS AUTHOR: https://elizabethkadetsky.com/

READ AN EXCERPT OF THIS BOOK, “The Memory Pavilion”:
http://www.postroadmag.com/22/nonfiction/kadetsky.phtml