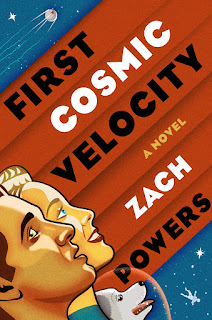 First Cosmic Velocity creates an alternate history of the Soviet space program in which the first cosmonauts are successfully launched into space but are unable to return to Earth. To hide the fact that the cosmonauts die in orbit, the Chief Designer recruits twins, keeping one on Earth to pretend to be their deceased sibling. The novel follows two of the earth-bound twins, Leonid and Nadya, as they grapple with their doubts and regrets over what this ruse has cost them.

I love writing characters who are least affected by emotion. I know this is contrary to what you’re supposed to do, but my taste in fiction has always been off-kilter. So in the novel, I loved writing the enigmatic government agent Ignatius. She’s always in control of the situation and always possesses knowledge greater than everyone around her. When she has a moment of empathy, however, I think it’s that much more striking. Ignatius is a major but not a main character, and in general I like to write side characters. I love when someone outside the main arcs of the story offers wisdom or revelation. They’re observers, able to view the happenings from an interesting critical distance.

None of the characters gave me too much trouble, but Nadya was the one I revisited most often. She’s been made detached and strange by the circumstances of her life, but I didn’t want to fall into any of the tropes associated with her archetype. Despite her detachment, she drives the most important action toward the end of the novel. I wanted to make sure that from very early on she had the agency and the strength of personality to do that.

It took me two novel manuscripts and four years to find my wondrous agent Annie Bomke, and then about another year for her to find my equally wondrous editor Sara Minnich. By the time the novel is published in August, it will have been “in progress” for over five years. I know that’s not necessarily long in terms of book publication, but it’s evidence that patience is perhaps the most important virtue a writer can have. I worry how many outstanding writers just didn’t stick with it because they couldn’t push through the slog of years. Be resilient, y’all!

All writing advice is suggestion. Every rule can and should be broken, on occasion. I want to read writing that strives to discover what words are capable of doing. There will be no discoveries and no surprises in writing that strictly sticks to the so-called rules. Yes, writing advice is great! But advice never applies to all people in all situations. The rules are simply what’s worked for previous writers. Writers in the future will draw from tricks and techniques that haven’t even been articulated yet.

I’m usually pretty clueless when I start a writing project, so surprise is my natural state. But some surprises are better than others. In First Cosmic Velocity, several parallel structures emerged that I’d not planned. There’s the main storyline, which accounts for probably 90% of the novel. That storyline alone could have been the book. But it’s the other elements that I think pushed the narrative into more interesting territory. There’s a series of flashbacks to a main character’s childhood. Within that flashback, there’s a folktale told by the character’s grandmother. There’s a recurring communication with one of the cosmonauts in orbit. All these elements interact with each other and reflect off each other and create an aggregate meaning greater than any single storyline.

George Saunders had a great observation that revision allows his writing to be better, smarter, and wiser than he is. I love that. My brain has a limit to the depth of work it can produce on a first pass. Through revision, though, it has a chance to reprocess information, make new connections, and explore fresh ideas it can only consider in relation to the ideas already on the page. This is the act of discovery again. So early rounds of revision aren’t just polishing language and tweaking structure. I want to return to the material and allow myself to discover the implications I’d missed, the seeds of ideas I didn’t allow to sprout. I’ll always be a doofus to some degree, but my work can be better than that. Revision is where your own writing can teach you things you didn’t already know.

There’s a fair amount of vodka drunk in my novel, and I think that’s a good addition to any book club. As far as food, I did include one meal, based on a menu my ex-girlfriend got from a Russian acquaintance. I’ve never eaten anything from the menu and am intimidated by Russian food in general, so I don’t know if I can endorse it. My research indicated that the Russianness of a meal is directly proportionate to the amount of dill used in its preparation.

READ MORE ABOUT THIS AUTHOR AND BOOK: www.zachpowers.com