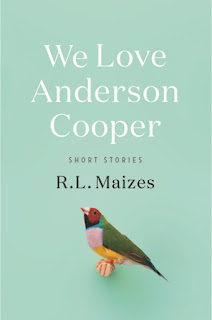 In We Love Anderson Cooper, characters are treated as outsiders because of their sexual orientation, racial or religious identity, or simply because they look different. A young man courts the publicity that comes from outing himself at his bar mitzvah. When a painter is shunned because of his appearance, he inks tattoos that come to life. A Jewish actuary suspects his cat of cheating on him with his Protestant girlfriend.

I had a lot of fun writing “A Cat Called Grievous.” The humor is so dark and it bumps up against magical realism, though a blogger recently included it in a list of realist stories about animals. It’s a feminist story, but never lectures the reader.

“Ghost Dogs” is about a woman who has lost hope and was very hard to write. A colleague who read an early draft told me it lacked contrast. She compared the story to a painting that is so dark you can’t make out the images. Following her advice, I found ways to lighten up the story. In some cases that meant flashing back to times in the main character’s life when she was surrounded by love.

A particularly low day was one on which I got rejections from three agents who had read the full manuscript. I had high hopes for each of those agents, and the rejections body-slammed me, especially coming together. One of the agents said I’d never find representation because there was no market for short story collections. That made me determined to press on, but only after eating most of a vegan chocolate cake. I saved one slice in the freezer, telling myself I would eat it when I signed with an agent.

A high point was when my agent sent the manuscript out on a Friday and three publishers expressed interest in acquiring the collection on Monday.

A teacher of mine once said he couldn’t think of any student who stuck with writing over the years, working at it and honing her craft, who didn’t find success. I love this because it shows that writing is not an inborn talent that either you have or you don’t. Instead, writing is a skill that you develop over time with great effort.

Putting the collection together, I chose from stories I wrote over a ten-year period. I was surprised by some of the older ones. They possess a rawness that I like and perhaps have moved away from as revision has become the focus of my writing. I was careful not to over-revise the older ones I included, not wanting the original impetus for them to get lost, or for them to present with perfect manners.

In the title story, “We Love Anderson Cooper,” a boy comes out as gay at his bar mitzvah service. Later that day, his mother says to him: “Why didn’t you talk to us first? We would have understood. We love Anderson Cooper.”
Inquiring foodies and hungry book clubs want to know: Any food/s associated with your book?

In “The Infidelity of Judah Maccabee” food is an important character in the story, which takes place during Christmas and Hanukkah. Fragrant latkes (potato pancakes) remind the main character, Barry, of his childhood. When his girlfriend, Anette, bakes Christmas cookies, Barry feels as if her holiday is taking over the house. Barry’s cat falls for Anette when she prepares fish stew.

READ MORE ABOUT THIS AUTHOR: www.RLMaizes.com

ORDER THIS BOOK FOR YOUR OWN TBR SHELF: https://www.rlmaizes.com/book-we-love-anderson-cooper