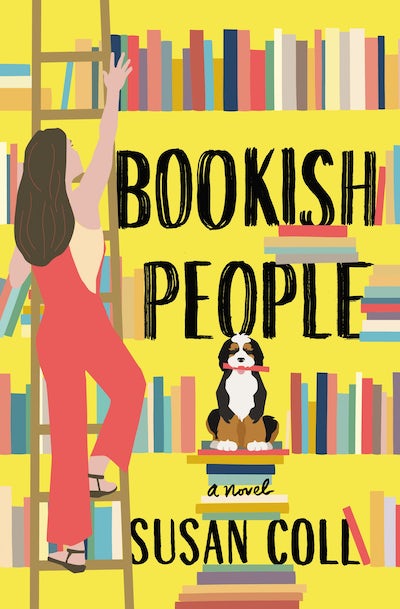 A vacuum cleaner, events in Charlottesville, a solar eclipse, a couple of Yiddish jokes I stole from my husband, and an independent bookstore came together to inspire Bookish People. A screwball comedy set in Washington DC during one soggy August week, the novel captures the spiritual depletion of a recently widowed bookstore owner and her overeducated, underpaid crew of booksellers. They are caught in the middle of a controversy: A reviled British poet who is scheduled to appear at the store has just been cancelled because of his misogynist behavior. What is a progressive bookstore owner to do?

I have begun answering this question about six times now, and I’m still not satisfied with the answer. I feel I ought to say that I most enjoyed writing Sophie, the bookstore owner, or Clemi, the events manager, both of whom I can relate to, and who I understand intuitively because they are each, in a way, a little bit of me. But in the end, I confess that I had the most fun writing Raymond Chaucer, the misogynistic poet who, in the pages of this book, is on one long bender. He’s on tour for his new poetry collection, and he’s been cancelled before being cancelled was even a thing. The reading public believes that he is responsible for his wife’s suicide, and he’s being compared to Ted Hughes. Fun fact: Raymond appeared in my previous novel, The Stager, in the context of his other, other family. He has a complicated life.

Raymond was also the most difficult character to write. I worried that he was too dark, and that he might alienate readers. My editor suggested cutting his point of view, which I did, but then I found I missed him, so I wound up sticking bits of him back in.

It’s never easy, this publishing thing, and each book is its own challenge. I had the same agent for nearly 20 years and had also worked with the same editor for more than a decade.  My editor’s namesake imprint folded, and I switched agents, all of which was somewhat traumatic. Also my timing wasn’t the best—shortly after the book went out on submission, the pandemic began, and for months I didn’t hear anything. But in the end serendipity prevailed: My new agent learned about a new imprint at Harper, and he sent the manuscript off.  I am incredibly fortunate to have found an amazing editor who made this a much stronger book and am grateful for this fresh start.

I love that advice! In my previous novel, The Stager, I was taken by surprise when the pet rabbit in the book began to talk. I used to roll my eyes when I heard authors say that their characters took on lives of their own, but in this case the rabbit quite assertively inserted himself into the narrative and had a lot of things to say. I had a similar experience in Bookish People, when the vacuum cleaner developed a distinctive personality. Ditto for the Russian Tortoise, Kurt Vonnegut Jr. I suppose the common thread here is that animals and inanimate objects ought not be underestimated in their supporting roles.

I hope readers come to the book understanding that it’s intentionally screwball, with a lot of manic action and zaniness.

There is, alas, a lot of unhealthy food: Buffalo Ranch Pringles and French fries are consumed, as is craft beer and a couple of skim cappuccinos.

Two party scenes feature distinctive alcoholic beverages: Malort, a famously foul-tasting spirit from Chicago, is chugged in the opening scene. The penultimate chapter features a solar eclipse cocktail called Penumbra Punch, which includes three different kinds of rum from a private Bermuda reserve, pineapple juice, and grenadine. There might be more ingredients, but my character is interrupted mid-sentence, so we’ll never know what else is in there.

READ MORE ABOUT THIS AUTHOR: www.Susancoll.com

Email ThisBlogThis!Share to TwitterShare to FacebookShare to Pinterest
Labels: Books Received, Classes and Events, Social Media, Sorrow, TBR [to be read], The Marketplace, Tough Questions, Two at the Most
Older Post Home