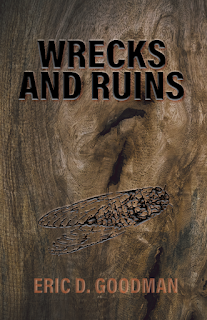 Wrecks and Ruins has been described as a novel about how relationships are built and how they evolve or dissolve over time. It’s an anti-love story that corrects itself. The main character, Stu, believes that romantic love is like the cycle of a cicada: a few months of excited buzz—romance, lust, excitement—followed by monotonous silence that can’t live up to the noisy promise at the start. Stu is drawn to wrecks and ruins, which he photographs, and in time he comes to connect his collection of broken things to his collection of broken relationships.

The most interesting character to get to know was probably Tiffany. The other characters were loosely based on characters from a short story I wrote long ago, so it was like a reunion getting to know them again. But Tiffany, Stu’s love interest, was a new character, and I knew I had to make her special. She had to be Stu’s equal or superior in every way, had to keep his habitually diminishing interest, and deserved her own story arc.

The most challenging character wasn’t necessarily a person, but a thing: COVID-19.  I wrote the first draft in 2018, with no idea that we would be in a worldwide pandemic. I couldn’t just shift the story because they were tied to the cycles of the 17-year cicadas. To make it more complicated, a number of scenes take place at or reference actual concerts that the characters attend, and those all needed to stay in the accurate years and seasons. Even in my first round of rewrites, in 2020, I was writing as though the pandemic had ended by 2021. Although I wrote in additional scenes and references to COVID, it was a challenge to weave it all together.

Emotionally, this book started at a high point because the first draft was written in a flurry during a crazy three-day novel contest. Of course, there were a few rewrites with expanded scenes and development in the years after those initial three days. That burst of activity at the start seems fitting, given the protagonist’s view of romantic love. The publisher of my former novel, Loyola’s Apprentice House Press, got first dibs at the manuscript and accepted it, so there wasn’t the same convoluted journey to publication that I’ve experienced with other novels. The low point of writing this was probably when I dusted if off during Covid and realized the puzzle I needed to take apart and reassemble because of all the previous scenes that took place in a “business as usual” world instead of during a pandemic.

Read more. I think of all the tips and advice I’ve received over the years, that was probably the most helpful. When you read other fiction—similar to your own and unlike it—you soak up the styles and stories and it helps as you continue your own writing. Books on writing are great, but I’ve probably become a better writer more from reading other fiction and creative nonfiction than from any courses or writing guides.

How quickly time passes by a person. The majority of this novel is in the present, but it falls back to other times, in 1987 and 2004 and 2009, and even forward into 2023. But most of the characters, although evolving, are the same at the core—and so are their bonds to one another. I think that reflects real life. There are friends I’ve known since middle school who have grown in so many ways, and yet, they seem to be much the same at the core. It surprised me a bit that I could write from the same character’s perspective as a teenager and a 50-something and, at the core, the character was very much the same despite his journey, his development, and his evolution.

I like to set my scenes in real places, to ground them in reality but also to provide additional “aha” moments for readers who may recognize those places. There are scenes in this novel in Baltimore, Las Vegas, Annapolis, Virginia, Bryce Canyon, and even Vilnius. Taking it a level beyond that, I set some scenes in specific moments, such as concerts when they really happened, election cycles, and cicada cycles. The 17-year cicadas serve as a metaphor and a marker of the passage of time.

No recipes, exactly, but some exotic drinks. In the scenes taking place in Lithuania, Stu and Tiffany drink Krupnikas, the Lithuanian version of Krupnik, or honey liquor. They also drink Riga Balsam and Tallinn Vanna, other popular liquors from the Baltics. I’ve thought about serving those up at a book event, if we’re back to having in-person book events with shared refreshments when the book is released.

READ MORE ABOUT THIS AUTHOR: www.EricDGoodman.com

LISTEN TO THE AUTHRO READ AN ABRIDGED VERSION OF “CICADAS” ON BALTIMORE’S NPR STATION, WYPR (Author’s note: “Cicadas” is the story that I wrote in the early 2000s and the inspiration for Wrecks and Ruins.): https://yourlisten.com/edgewriter/cicadas

Email ThisBlogThis!Share to TwitterShare to FacebookShare to Pinterest
Labels: Making Myself Hungry, Small Presses, TBR [to be read], Two at the Most, Writing Tips
Newer Post Older Post Home