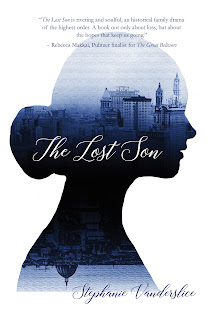 Give us your elevator pitch: what’s your book about in 2-3 sentences? (If this is too many sentences, you can cut the first one)

How does a mother survive the unsurvivable? After her husband and the baby’s nurse kidnap her infant son, Nicholas, and take him back to their native Germany, Julia Kruse must completely rebuild her life in America. The Lost Son chronicles Julia’s journey from Depression-Era Queens, NY through World War II as she struggles to provide for herself and her remaining son, Johannes. Over the years, her search for Nicholas is thwarted at every turn, until she falls in love with chauffeur Paul Burns, whose boss might have the political connections to find her son and bring him home from the German front during the last days of the Third Reich, where Johannes is also fighting for the Allies.

I really enjoyed creating Paul. I just decided that for my main character to fall in love with someone after everything she’s been through in her first marriage, he’d have to be pretty special. Probably Nicholas, the younger son, gave me the most trouble, because he grew up in Germany. Even though I read a lot of memoir and history about Germany between the wars, it was hard to get him to come through authentically. I hope I was successful.

Oh boy. Well, the book got me my agent, Anne Bohner at Pen and Ink Literary in 2012. You read that right. 2012. She sent it on submission twice, to an A list and a B list. There were some near misses but it didn’t land. After that she freed me to submit to independent presses. I spent the next several years submitting to contests and small presses and again, came coming close and shortlisting for awards several times. The closest came in spring 2018 when I submitted to a press where the editor said no and then a month later contacted me and said he was still thinking about the book while he was reading other submissions, that it had stayed with him. He said he wanted to talk about some suggestions with the upshot being if I took those suggestions, he’d look at it again. My agent said she doesn’t normally recommend someone do revisions without a contract but it wouldn’t hurt to talk to him. So we had a nice phone conversation. I actually thought his suggestions, which were substantial, sounded like they would improve the book. So I dove back in and did another revision, mostly to the second half of the book. Sent it back. He still said no but that he was sure he would find a place somewhere. I need to send him a copy.

I submitted to Regal House right at the beginning of the pandemic. Jaynie Royal, the publisher there, responded positively at every step of a rigorous submission process. I had also submitted to a teaching press in Baltimore at the same time and suddenly they wanted it as well. So I went from years of “not quite” to two yeses simultaneously. With the help of advice from my agent, I chose Regal House. I’m so glad I did. They’re a fantastic press.

Not surprisingly, given that story: “never give up.” Persistence has gotten me pretty far in this field. I remember saying over and over for the past ten years, “I would give up on this book but it keeps coming so close.” Now I’m glad I didn’t. Also, the process of writing is really what matters if you’re a writer, what feeds you. Trying to get published is business. It feels good when you get a “yes” but it won’t feed you. Ultimately, you have to enjoy the process.

The character of Johannes, Julia’s oldest son, who grows up in the course of this book. I also had fun writing him. Funny things he would do or say. I got one of his remarks from a story in a 1930’s Catholic elementary school textbook which I just happened to pick up at a flea market (I LOVE flea markets).

The Lost Son is very loosely based on something that actually happened to my step-great grandmother, Julia. I didn’t find out she was actually my step great-grandmother until I was in my early 30s. I learned how she and my grandfather, Jacob, married in the mid-1940s in what was a second marriage for both, a late-in-life love. At the time I was the mother of two young boys myself and I couldn’t imagine how my stepmother endured the loss of her youngest son as an infant. I thought about her a lot over the years. I also decided that my great grandfather must have been a special person for her to have overcome such a betrayal and remarry.

Absolutely. Food is a big part of this book; Julia is a pastry chef whose father was a renowned chef. She works at a bakery. So German foods like brotchen (morning rolls), sauerbraten, and bread play a big part. The novel takes place in Queens in the 20s-40s, when German, Italian, and Irish immigrants were the main population. There were German restaurants everywhere. I mentioned Gebhardts, where Julia and Paul go for their first date, and which is a real restaurant my grandparents brought me to a lot as a kid. I also mention egg creams often, which were a big part of the soda fountain culture in New York at that time. But I will leave you with my husband’s family’s French bread recipe, which Julia finds great satisfaction in making, as do I.

Combine yeast, salt and sugar with warm water in a large bowl.  Cover with a dishtowel and allow to proof for 5-15 minutes, the evidence of which will be bubbly biscuit-colored coating on top of the mixture.  Stir in flour 1-2 cups at a time until a stiff ball of dough forms.  Turn the dough out onto a floured surface and knead between 5 and 10 minutes, then place the dough ball in an oiled bowl in a relatively warm spot until it rises to double in bulk.  Rising will take between 1-2 hours but at this point you can just go about your day.  As my mother-law would say, bread is very forgiving.  The dough won’t take over your kitchen like the blob, or “fall” like a cake, so if you want to go to a movie, rake the lawn, take a long lunch with friends, feel free to do so.

When you’re ready to return to it, set your oven to 350 and while it pre-heats, punch down the dough on the same floured surface and divide it into eight, four or two balls of even-size size which you can then shape into long baguettes.  If you have a brush, you might brush the tops with a little milk or olive oil (I have come to prefer the latter). Place these on oiled, foil covered baking pans (if you get serious about this, you’ll probably want to invest in baguette pans; I was fortunate to inherit mine from my in-laws but baking pans are fine when you’re just staring out) and allow to rest/rise for another 10 minutes or so.  (My mother-in-law would be alarmed that I don’t let the baguettes rise for at least thirty additional minutes but I am usually under a time constraint at this point or just feeling impatient.  The loaves seem to come out the same.) Slash each loaf diagonally a few times with a sharp knife, then bake for forty-five minutes at 350.  Depending on the heat of your oven, if you’re cooking more than 4 loaves, you may need to switch out the loaves on the top and lower shelves of the oven midway through to make sure they cook evenly.  Loaves can be consumed immediately, with the rest frozen for reheating during the week.

READ MORE ABOUT THIS BOOK:

ORDER THIS BOOK FOR YOUR TBR STACK: