TBR: Until We Fall by Nicole Zelniker

TBR [to be read] is a semi-regular, invitation-only interview series with authors of newly released/forthcoming, interesting books who will tell us about their new work as well as offer tips on writing, stories about the publishing biz, and from time to time, a recipe 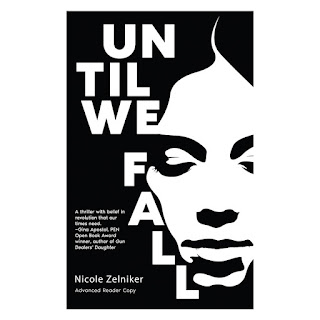 Isla Logan's history teacher Morgan Young is arrested for conspiring to take down the dictator that rules over the United States. The arrest sets off a chain of events that will lead to Isla, her fellow refugees from the U.S., and their allies partaking in the fight of – and for – their lives.

This is such a hard question. Different characters were fun to write at different points, and for different reasons. Zoe’s voice was awesome to develop, while I really enjoyed writing Isla’s story arc. As for the character that gave me the most trouble, that was probably Adam, for reasons you’ll have to read the book to find out!

The high was working with Jaded Ibis Press. They were so thorough in the editing process (I’m not ashamed to say the initial manuscript needed a lot of editing, as first drafts almost always do) and I love working with a press that has the same values as I do. The lowest low for this book was the same as the last few books I’ve worked on – imposter syndrome. I have a hard time seeing my own writing as worthy of publication, even if I think it’s a story worth telling. I think a lot of writers, especially young writers, feel this way.

“Write what you know.” A lot of people I’ve spoken to dislike this advice because they interpret it as only being able to write characters exactly like them in situations they’ve experienced in real life. But I interpret it as, write stories based on what you care about. In this case, I’ve never been in a situation like the characters in Until We Fall experience, but I find American political history fascinating and pulled from my knowledge of that.

My characters sometimes get away from me, so it’s always surprising how the story changes as I write. I’ll be writing a character one way, and then it’s almost like they’ll tell me they need to be written another way, if that makes sense. They’re never stagnant in my head.

It’s important to me that these characters be diverse, that they come from marginalized communities, and that they’re stronger for it. So often I see cis white people from privileged backgrounds star as the protagonists of a dystopia, like in Divergent or The Fifth Wave. If a totalitarian government were to take over, the first people targeted wouldn’t be the Tris Priors of the world, even if she was divergent.

READ MORE ABOUT THIS AUTHOR: https://nicolezelniker.com/

WATCH A TIKTOK VIDEO ABOUT THIS BOOK:  https://vm.tiktok.com/ZMdTJA8X3/