TBR: The Fear of Everything: Stories by John McNally 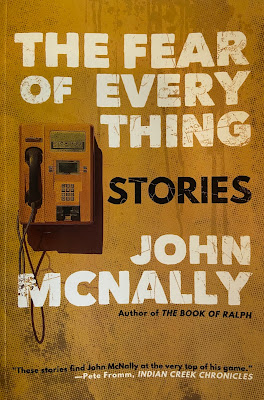 The story “The Creeping End” was a fun story to write because it began as three separate stories that weren’t working. But once I realized that they were three parts of the same story, I wondered if it was possible to write a story with three distinctly different tones. I subtitled it “a triptych,” and so the idea of writing a triptych unlocked the structural problems I’d been having trying to make it one linear and cohesive narrative.

As for the story that gave me the most trouble? Probably “The Phone Call,” but it gave me trouble in the most unusual way in that I wrote a draft of it in 1990 in one sitting, and then I lost the manuscript. I had printed it out and set it aside, but two days later I couldn’t find it. I was haunted by the story for twenty years, occasionally thinking that I would rewrite it, maybe turn it into a novella, possibly even a screenplay. But it wasn’t until around 2009 or so that I was asked to contribute to a Ray Bradbury tribute anthology, and the only idea of mine that was Bradbury-esque was “The Phone Call.” So I finally – twenty years later – revisited it. And that story set the tone for The Fear of Everything. (Side-note: When I was moving to Louisiana in 2013, I found the original version of “The Phone Call.” I was surprised at how many details from the original, which I had never read after writing it, made it into the version twenty years later.)

A year later, I revised it again and decided to do something with it. Short story collections have limited opportunities to get published and limited audiences, but I wanted to take pride in the book itself, the product. I wanted it to look good. The University of Louisiana Press had a new publisher, so I approached him about the possibility of publishing it. Fortuitously, after the press accepted it, I was awarded a professorship, which comes with a stipend that can be put toward publication costs, so I asked UL Press if I could have a hand in making production decisions. For the first time, I was responsible for hiring a cover artist (Keith Rosson did the cover), hiring the printer (the printer I hired had done one of my previous books), and hiring a copywriter with whom I’d previously worked.  It was a stressful process, but it was also great fun to be that deeply involved in the book’s production, which wouldn’t have happened without the professorship. And I love how the book looks, so I’m happy with the final product, and I’m grateful for the opportunity.

Develop a writing habit. It doesn’t make a difference if it’s ten minutes or eight hours. Try to stay in contact with the work.

As a whole, the tone of the book surprised me. If anyone’s familiar with my previous books, they may be expecting humor, but this book, though not without humor, is much darker and stranger than my previous books. There are also fantastical elements here and there, which may surprise anyone who’s read my previous books.

My approach to revision is patience. The last story in this book – “Catch and Release” – took ten years. I wrote half of it in 2007, couldn’t figure out how to push it forward, set it aside for ten years, and came back to it in 2017 to finish it. When I was younger, I was in a hurry to get published, and I published some stories before they were ready. I’m 54 now. I’m not in much of a hurry for anything anymore. When I was younger, I placed the burdens of my life on the work I was doing. My logic went something like this: In order to get a job, I needed to publish, and the more I published, the better the job. These days, the publication of a story yields nothing for me except for the publication itself. If a story takes ten years, it takes ten years.

ORDER THIS BOOK FOR YOUR TBR STACK: https://ulpress.org/products/the-fear-of-everything

READ A STORY FROM THIS BOOK, “The Magician”: https://www.thesunmagazine.org/issues/463/the-magician