TBR: Look at Him by Anna Starobinets. Translated from the Russian by Katherine E. Young 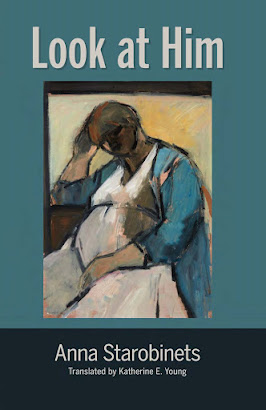 In this groundbreaking memoir, Russian writer Anna Starobinets chronicles the devastating loss of her unborn son to a fatal kidney defect. After her son’s death, Starobinets suffers from nightmares and panic attacks; the memoir describes her struggle to find sympathy, community, and psychological support for herself and her family. Look at Him ignited a firestorm in Russia, prompting both high praise and severe condemnation for the author’s frank discussion of long-taboo issues of women’s agency over their own bodies, including the aftereffects of abortion and miscarriage on marriage and family life.

What part of the translation process did you most enjoy? Why? And what part was most challenging, and why?

I loved working with Anna’s voice. For a memoir about the loss of a child, there’s a very great deal of wit and even humor in the book, most of it supplied by the authorial voice. In some chapters, Starobinets uses the device of “splitting in two.” Each of the two halves—the frantic, frightened one and the cool, detached woman observing her—will weigh in. Anna’s self-portrait is carefully crafted, but also apparently unvarnished. We watch a distinctly fallible, terrified mother face an impossible choice: kill her baby now, or watch him die in agony later?

The subject matter of pregnancy, not to mention pregnancy loss, was challenging. People who learn Russian as I did, in college, rarely learn terms for women’s bodily functions, childrearing, traditional women’s work, or basic domestic rituals—you have to pick that stuff up elsewhere. And how should one translate the cutesy names of children’s toys, diapers, and related items (by way of example, how would you translate something like “Linkimals Smooth Moves Sloth” into another language?)? But I think the hardest moment of this book for me to translate was the scene when Anna is in the hospital waiting for the hormones that will start her labor—and the termination of her pregnancy—to kick in. The nurse advises her to watch a movie, but the only thing she has stored on her laptop is an old Soviet musical version of The Three Musketeers: lots of prancing horses and plumed caps and singing cavaliers. The title of the chapter in Russian – the chapter in which Anna will lose her son forever—is taken from a line in one of the songs that literally means “It’s time, it’s time.” It took me forever to wrestle that short verse of the song into anything approaching song lyrics in English that could supply an appropriate title for the chapter—I finally came up with “Bye-bye.”

The book deals forthrightly with an impossible dilemma: what to do when your unborn child is diagnosed at 16 weeks with a fatal birth defect and, moreover, likely to die in excruciating pain no matter what you choose. One option: late-term abortion. I was pretty sure no major American publisher would touch such a book—there are only a handful of books on this topic in existence, in fact. In the end, I was lucky to find the small wing of a university press that specializes in Russian literature. However, going with a university press has meant a great deal of do-it-yourself work to publicize and market the book. Fortunately, the greater Russian-language community in the US has enthusiastically embraced this project; most have already read the book in the original. The virtual book launch will span continents and time zones—it includes author Anna Starobinets (Moscow), scholar Muireann Maguire (Exeter, UK), and the amazing Russian émigré literary bloggers Olga Zilberbourg and Yelena Furman of Punctured Lines (California)—and me in the Washington, DC, area. (NOTE: You may register for the 9/26/2020 book launch here.)

What's your goal when you start a new translation project?

I want to make something beautiful. I’m a poet myself, and a lot of my translation work is getting Russian-language poetry into English. There are many different schools of thought about what translation should be, but my goal is pretty simple: I want to make the work sound as if it had been written in English. In terms of larger prose projects, I choose books that I love myself, and authors I admire. My last book project before this one was the fiction of a political prisoner in Azerbaijan, a book called Farewell, Aylis. Its author, Akram Aylisli, is being persecuted today in his own country simply because of the fiction he chooses to write. I seem to gravitate towards controversial projects—as if by translating them I could write a wrong or negate an injustice. In the case of Look at Him, I’m hoping that both sides in the abortion debate will find a little bit of common ground in this beautiful and heartbreaking memoir. That’s a pretty quixotic notion of the power of translation—but it makes me very proud of what I do.

Some people think of translation as the mechanical transmission of words from one language to another. What makes this particular translation a work of art?

I suppose it’s possible to make even a sublime work in the original language tedious and unpleasant in English—that’s on the translator, of course. Any good translator takes into account things like tone, the sort of language used in the original—are the insults witty or vulgar, for example? If the narrator is a child, do they speak in a child’s voice (and if not, why did the writer make that choice, and how can it be conveyed in English)? A particular problem in translating from Russian is that Russian grammar lends itself to very long sentences, much too long for the tastes of most native English speakers. So, translators try to shorten those sentences. But in the last book I translated, every time I tried to shorten a sentence, I discovered that I was hacking apart one of the classical figures of speech—climax, antimetabole, chiasmus—so I had to find a way to keep those rhetorical units together. Translating is very much a kind of handicraft—the original author gives us the raw material, of course, but it’s up to the translator to shape and polish the work in English.

What kind of accommodations, if any, have you made for English-language readers? Did you change the book's title in translation?

There was obviously a bit of contextualization needed—the system through which medical care is accessed and delivered in Russia is very different than the systems familiar to American readers. Some of that context was delivered in the translation itself—inserting a clarifying adjective or phrase, for example, where none was needed in the original—but in the end I wrote a short translator’s introduction with a basic outline of how things work in Russia. The title is the same in both languages, but I had to adapt things like the song lyrics I mentioned before to make music in English.

There’s a terrifying episode in the book when Anna suffers a severe panic attack during the short walk to pick up pizza at her neighborhood café. And for months after the loss of her son she’s unable to swallow food—her throat just closes up. She finally starts to recover her health and her spirits when she follows a therapist’s advice to go to Greece and eat olives and feta cheese. “Olives and Feta Cheese” is the title of that chapter, in fact.

READ MORE ABOUT THE AUTHOR: https://starobinets.ru/eng/

READ MORE ABOUT THE TRANSLATOR: https://katherine-young-poet.com/anna-starobinets/

ORDER THIS BOOK FOR YOUR TBR STACK: https://slavica.indiana.edu/bookListings/Three_String_Books/Look_at_Him