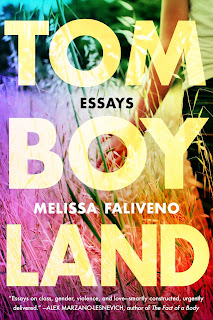 Tomboyland is a debut essay collection about gender, class, and the American Midwest. Part personal narrative, part interview, part cultural reportage, it investigates midwestern traditions, mythologies, landscapes, and lives to explore the intersections of identity and place. From F5 tornadoes and fast-pitch softball to gun culture, strange glacial terrains, kink party potlucks, and the question of motherhood, it explores ideas of belonging and the body, isolation and community, and what we mean when we use words like woman, family, and home.

I think the opening essay, “The Finger of God,” was probably the most fun to write. An earlier version was published in Prairie Schooner in 2018, and it was about this F5 tornado that destroyed a small Wisconsin town called Barneveld, eight miles west of my hometown, in 1984, when I was a little over a year old. When I was a kid, I was obsessed with the story of this tornado, and with tornadoes and severe weather in general. I was also, obviously, obsessed with the movie Twister; I thought I’d be a storm-chaser someday, and had a deep and abiding crush on the local television meteorologist. (I had a signed glossy photo of him on my bedroom wall; it was serious.) It turns out, my obsession with this story, and with tornadoes, had pretty much everything to do with religion—I grew up in a pretty religious town, and for a few formative years was very into Christianity, but have since lost that religion entirely. So the essay was also about faith, and destruction, and coming to understand that life is very fragile and random, that nothing really keeps us safe, especially not these stories we tell ourselves. It was hard, but it was also fun to write into all of that, and make those connections on the page. And the Twister sections were particularly fun, because the process involved watching that terrible and perfect movie over and over again (Spoiler alert: I still love it).

Then, last year, as I was finishing the book, I had a revelation: I had been telling this story about Barneveld all from second-hand accounts: my mother’s, mostly, neighbors and friends. It had become mythlike in my hometown, a place called Mount Horeb, which is a sister-town to Barneveld and has a thing for mythology. (It’s known as the “Troll Capital of the World”—you’ll have to read the book to find out more about that.) Anyway, I realized that, in order to tell this story right, I needed to talk to the people who had been there—the survivors of the storm, whose homes and businesses were destroyed, some of whom lost family and friends. So last summer, right around the thirty-fifth anniversary of the tornado, I went to Barneveld and talked to them, which was a challenging and rewarding experience. It opened the essay up in a way that was really exciting, and it became something new—a story that wasn’t just my own anymore, but was theirs, too.

It was a very long road to get here. I started the oldest essay in this book in 2010, and I’ve been working on it—very slowly—ever since. There was a lot of rejection along the way—from magazines, agents, fellowships and grants and contests. There were times when I couldn’t write at all, when I was sure I’d never publish a book.

And then, in 2017, something shifted. In February of that year, I went to the Millay Colony for the Arts in upstate New York for a nine-day, self-guided retreat. I could only get one week off from work, so I spent a week and two weekends there. It’s not a juried residency; you pay a little money for the space, but you get a room and a studio in this very quiet, magical place, and it was so incredibly worth it. It was like a light went on. Walking through the woods every day, breathing the crisp, cold air, hiking in the trees where Edna St. Vincent Millay—who, notably, went by the name “Vincent”—wrote her poetry, something inside me woke up. In my little studio in the barn that Vincent built, I wrote a draft of the near-title essay of the book, “Tomboy,” in a mad rush of inspiration. It would become the essay that crystallized what my whole book was about—this intersection of the body and the land—and the essay that got my agent’s attention. A year later I went back, and wrote a draft of another essay, and that fall we sold the book. I will always credit the Millay Colony for helping me get to this point. It’s a beautiful place, and there’s magic in those trees, and it helped me understand not just what I was trying to say, but what I needed to do to get there. I stood on top of a mountain when I realized it, so that was a very literal high.

Every writer is different, and their processes are different too. Whatever yours is—whether you write every day or just on the weekends; whether you write complete drafts or revise as you go; whatever it is you do, honor that process and practice it as often as you can. And don’t listen to other people if they tell you to do it differently.

Also, a fellow teacher said this recently, and it struck me as pretty spot on in my experience: Writing is hard. Anyone who tells you it’s easy probably isn’t a writer.

I love that! And I think it really aligns with the way I write essays—into a question, never really knowing where I’m going. Over the decade that I was working on this book, I wasn’t really sure what it was. I had all these disparate-seeming topics I was exploring: a moth infestation that I experienced when I first moved to New York, the Barneveld tornado, a rare geological terrain where I grew up called the Driftless Area. I wrote an essay about guns, and one about fastpitch softball, and one about BDSM and food; I wrote one about motherhood, chosen family, and the decision to have or not have children. I was working something out—somewhere there was a thread—but I couldn’t quite find it.

When I got an agent, the very smart and perceptive Adriann Ranta Zurhellen, she read my essays and she was like, “This is a book about gender.” And I was like, “Oh. Whoa. You’re totally right.” And then everything I’d been working on, all these seemingly disparate pieces, coalesced. I knew the through-line of the book was this question of womanhood—what it means to be a woman, where my body fits into that word or doesn’t; about strangeness and loneliness and family and violence and love, and how it’s all connected to what I was calling “the geography of identity”— how our understanding of ourselves is both defined and complicated by where we come from, and who we come from—our homeland, our socioeconomic status, our education, our family. It was a book about gender, yes, but it was also a book about those intersections: class and land and the idea of home, what it means to belong. That process of discovery was revelatory, and it helped me take these early drafts and revise and rewrite them in a whole new light. I also realized I couldn’t tell these stories or ask these questions alone, and that’s where the interviews came in. In addition to the tornado survivors, I spent a week in Wisconsin interviewing women and queer people, mothers and nonmothers; gun-owners and former gun-owners; family and friends—about fifteen people in total—to help me explore these questions more deeply.

Who is your ideal reader?
I think this book will resonate most with women, queer people, and Midwesterners—those who live there now or who, like me, have left, but still think of it as home. But more broadly, it’s my hope that the book will reach anyone who has ever felt like they exist in the spaces between—neither one thing nor the other, unable to fit themselves, or their bodies or identities, into one neat little box on a form. I also hope that people will pick it up who don’t necessarily feel those things, but might be open to learning something about people who do. Overall, I think this is a book for people who question things—their understanding, their lives, societal or cultural expectations and prescriptions—and who don’t necessarily seek a definite answer to anything, but find meaning in the questions.

Yes! There’s an essay in the book called “Meat and Potatoes,” which is essentially about food, sex, and my blue-collar Midwestern family food traditions. On my mother’s side, I come from a long line of Wisconsin Irish-German farmers and factory workers, and this essay spends a good deal of space discussing the foods I ate growing up, much of which came from the quarter cow we kept in the garage freezer, raised and butchered on the family farm; or from Oscar Mayer, where my dad worked for a while. One other important part of this essay comes from his side of the family, which is very much not Midwestern—my Italian grandmother’s Sunday gravy. I would love to share that recipe with you, but alas, the Faliveno family contract forbids it. What I can share is a recipe for something very Midwestern: tater tot casserole! (Always casserole, never hotdish.) I don’t actually cook this often, because I’m mostly a vegetarian these days. But when I want something that tastes like home, I usually want either the gravy or this.

*****
READ MORE ABOUT THIS AUTHOR: www.melissafaliveno.com

ORDER THIS BOOK FOR YOUR OWN TBR STACK: https://bookshop.org/books/tomboyland/9781542014199
READ AN EXCERPT FROM THIS BOOK,