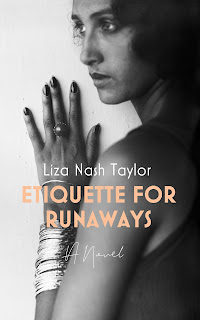 A sweeping Jazz Age tale of regret, ambition, and redemption set in rural Virginia, New York and Paris and inspired by true events, including the Great Moonshine Conspiracy Trial of 1935 and Josephine Baker’s 1925 Paris debut in Le Revue Nègre.


Which character did you most enjoy creating? Why?

I think that bad characters are fun, since we can have them act out things the rest of us (hopefully) repress, like fantasies of revenge, and throwing stuff. The trick is to make these characters sympathetic or likable in some way so they don’t come across as melodramatic stereotypes, right? My character Dora is a street-smart petty thief and probably a sociopath, but she’s generous with the spoils of her pilfering, and she’s a lot of fun at a nightclub.

Each of the three parts of this novel are set in different places and each has its own set of characters. I’d have to say that my main character, May Marshall, brought me the most grief. I went through two agents, an MFA program, and several workshops and classes working on this novel. My friend Mary Kay Zuravleff (who’s a fabulous teacher and author) told me early on that May needed to have more agency. She was right. With each revision and draft May’s character became more complex and conflicted. She found her own voice, and I was surprised at how much I was able to tap into my own memories of feelings—especially shame and social anxiety—and attribute those emotions to her. Sometimes that means delving into those locked drawers and reliving some painful stuff. In some cases, I found myself wondering why I continued to hold onto some of this old crap. But we do, don’t we? And here, look! It’s has a use, at last. As it turned out, May develops agency as the plot progresses, and maybe I was also developing some agency as a writer. In the final edits with my publishing editor Jen Pooley, May learned to speak up for herself and make a stand. Agency ended up being a primary theme in the story, and every scene seemed to tie back to that one thing. But it was a process and as a writer, I needed to give myself permission to write a character who is flawed and vulnerable.

As I said above, this book took a lot of revising. I even did a big revision after it was under contract. It took a whole year for me to get my publishing contract once it was negotiated. During that time I didn’t touch the manuscript or even look at it, so when I did go back in with my editor I had fresh eyes. So that was something of a blessing, I suppose. As I said before, I submitted this manuscript in 2016 and signed with an agent. When it became clear, after almost a year that our separate visions for this story diverged, we split up, the manuscript having never been sent out to publishing houses. It was tough, and I had a lot of self-doubt. I had to revise and submit all over again. After I found a new agent the manuscript went out right away and took about six months to sell. During that time I finished my MFA and a second manuscript, which is a stand-alone sequel to ETIQUETTE FOR RUNAWAYS. I was fortunate that my agent, Mark Gottlieb, brokered a two-book deal for me.

While I worked on this novel I was getting my MFA, and I was learning SO much about dialogue, and character, and pacing—everything! It seems now like every lesson and workshop and advisor is represented in the final product. Taking constructive criticism can be tough, but I leaned that sleeping on it always helps. My first, gut reaction is usually feeling wounded or defensive, or misunderstood, and when we feel that way I think we stop listening. I know I do. The writer’s ego needs to go wait in the car while we get about the business of sifting through suggestions and criticism, picking out what resonates and implementing it, even when it’s hard and we’ve heard something we know is true (but didn’t want to spend the time fixing) like changing from third person to first person, or something huge like that—and once you accept it it’s actually a relief and you can get back to work with purpose.

Endings! In both of my novels the endings didn’t reveal themselves to me until I was about three-fourths of the way through. I realized, once I had an ending, that I needed to know my characters more deeply before their behavior could be predicted. I needed to let them fall down, and make stupendously stupid choices even while I was (silently) yelling, “No! Don’t DO that, you idiot!” or something similar. When the endings came to me, they weren’t tied up in a pretty bow. Life seldom is.

ETIQUETTE FOR RUNAWAYS was not the original title. I liked my first title, The Thin End of the Wedge, but it proved, alas, to be problematic. It was a British idiom I first read in Nancy Mitford’s fabulous 1945 novel, The Pursuit of Love. As proclaimed by her character Uncle Matthew Radlett, “the thin end of the wedge” denotes a seemingly insignificant event or action certain to lead to catastrophe and ruin. So, being that the phrase was British and somewhat antiquated, most Americans had never heard it. So it had to be explained, which involved describing not only the meaning of the idiom but also the source. This became tedious. People’s eyes glazed over before I even got to start describing my plot. Then, adding on to that, there was an ongoing issue of the title being repeated with the wrong wording. The title was THE THIN END OF THE WEDGE, but people kept saying “The Thin EDGE of the Wedge.” I got tired of correcting, then going on to explain the meaning, source, etc. as eyes glazed over. So after this happened several times, I asked my publisher if we could re-think it, and they agreed.

I pulled a lot of hair out, wondering, What makes a title great? If I figure it out, maybe I’ll write a book about it titled, Titles for Dummies, or similar. Here’s what I do know: good tiles are evocative and intriguing. Many of them challenge us to puzzle out their meaning—what the hell is a clockwork orange? What was the curious incident/ the something wicked? Those phrases would entice me to pick up the book and have a closer look, and maybe read the cover copy.

So, the final title comes from several references in the story to Emily Post’s premier guide to manners: Etiquette in Society, in Business, in Politics and at Home, which was first published in 1922. My main character would have owned a copy. At several points in the story she wonders what Mrs. Post would do in similar circumstances.

Yes! I have a signature cocktail called a Bitter Blow. The book is set during prohibition, and at that time people were coming up with creative cocktails to mask the flavor of corn liquor. In the book it’s described this way: “Shadblowberry cordial, moonshine, soda water, and a dash of bitters.”  Shadblow berries are sort of a cross between a blueberry and a currant. My dogs eat them off the bushes in our yard. I’m working on translating this into a modern-day recipe. I’m thinking it will be something like a Cosmopolitan with Cassis instead of cranberry, or something similar.

READ MORE ABOUT THIS AUTHOR: https://lizanashtaylor.com/

READ MORE ABOUT THIS PUBLISHER: https://www.blackstonepublishing.com/