TBR: The Boy Detective & The Summer of ’74 and Other Tales of Suspense by Art Taylor 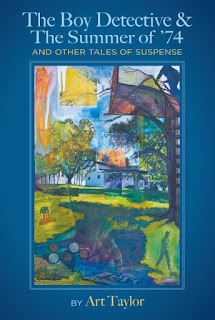 This collection gathers 16 of my stories from the 25 years (25 years?!) since my first mystery appeared in Ellery Queen’s Mystery Magazine—though really you’d have to cut that quarter-century nearly in half to calculate my output, since it took about 12 years from my first appearance in EQMM (“Murder on the Orient Express” in 1995) to my second (“An Internal Complaint” in 2007). The title story is my most recent publication—in the January/February 2020 issue of Alfred Hitchcock’s Mystery Magazine—and the rest of the collection includes short stories that have won honors including the Edgar Award, the Anthony Award, and several Agatha, Derringer, and Macavity Awards. I’ve been very fortunate with the attention readers have given my short fiction.

The opening story in the collection, “Mastering the Art of French Cooking,” is possibly the quickest I’ve ever written a story—and oddly, possibly the one that people talk most about. Roxane Gay championed the story, which is structured as a recipe, and I’ve heard it’s been taught in creative writing workshops. I came up with the idea while my mind wandered during a Chicago concert my wife, Tara Laskowski, dragged me to. The next morning, I woke up, wrote the first draft quickly, showed it to Tara, revised it, submitted it before noon, and had an acceptance from PANK early afternoon.

That’s an anomaly for me—to say the least.

More like my pace: I wrote the first draft of “The Boy Detective & The Summer of ’74” in the early 1990s, and it finally appeared in print more than 25 years later—in the most recent issue of AHMM, as I said above. The first draft was 3,500 words, the final nearly 12,000, and in between it became one strand of a failed novel, reemerged as a novella of about 18,000 words, and… well, there were a lot of years spent putting that one aside, coming back to it, expanding, condensing, tinkering, tinkering, tinkering.

I’ve been very fortunate in this regard too. My publisher, Crippen & Landru, specializes in high quality volumes of short mystery fiction—both by classic authors and by contemporary voices. I’ve long admired the publishers, long dreamed of having my own work in their series; and I was honored when I heard that they’d been following my own career and thinking the same thing. Everything just came together.

It may be clichéd at this point, but Anne Lamott’s “Bird by Bird” continues to resonate. I’m an extremely slow writer, but somehow, if you keep at it, you can get where you’re going.

Maybe because I’m a slow writer, partial drafts have sometimes languished for a long stretches before I’ve figured out where a story is going. I submitted the first half of “A Voice from the Past” to some workshop readers—it’s a story which revisits the legacy of hazing at a boys boarding school—and they responded with, “This is great!” and “What’s going to happen next?” And I had to tell them that I really didn’t know—didn’t know to the point that I finally put the draft aside. For nearly five years. When I came back and reread it, suddenly I saw the possibilities lurking in the small details I wasn’t entirely aware I’d folded in—what one character might have been doing, the extremes another character might go to, and how those extremes were rooted in the past. I often tell my writing students that they have to listen to their own work—to what their unconscious might be doing—to figure out what a story is really about, what to do with it. Often I think the best stories come out that way.

I want to give a shout-out to Luke Buchanan, a North Carolina artist who created an original work in response to the title story—the painting now on the cover of the collection. Luke incorporated several specific elements of “The Boy Detective” into his collage here, and the whole image captures so much that mix of nostalgia and melancholy and uneasiness that I associate with the story myself—and with much of my own work generally.

I didn’t realize it until I read through the collection at proof stage, but many of my stories feature cocktails! …and they’re occasionally pertinent to the plot, as with the gimlet in “The Odds Are Against Us.” Here’s that recipe:

Shake vigorously with ice.
Strain into a chilled coupe glass.

After 10 minutes, fine strain into a container and chill.

Bonus recipe: You can actually make the recipe for coq au vin in “Mastering the Art of French Cooking” (linked below), but please take care to leave out the arsenic.

[Editor’s note: I love The PDT Cocktail Book and we’ve made these gimlets many, many times!]

READ MORE ABOUT THIS AUTHOR: www.arttaylorwriter.com

READ MORE ABOUT THIS PUBLISHER: www.crippenlandru.com

ORDER THIS BOOK FOR YOUR OWN TBR STACK: www.crippenlandru.com

READ A STORY, “Mastering the Art of French Cooking”:  https://pankmagazine.com/piece/mastering-the-art-of-french-cooking/

Email ThisBlogThis!Share to TwitterShare to FacebookShare to Pinterest
Labels: Making Myself Hungry, Small Presses, TBR [to be read], The Marketplace, Tough Questions, Two at the Most, Writing Tips
Newer Post Older Post Home