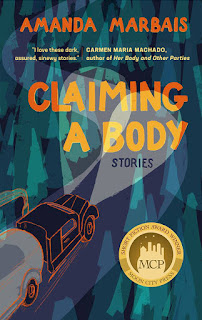 Claiming a Body is a collection of short stories, many of them in the literary crime genre. It’s set in the Midwest and focuses on characters dealing with relationship issues, climate change, and economic uncertainty. It also contains stories of those living life after trauma. Their worldview has permanently shifted, and they’ve come out with a certain amount of levity and dark humor. Yet, these characters don’t want your pity. They are down but not out.

One character I really enjoy is Liz from “The Calumet”. Yet she often makes choices I wouldn’t. I suppose she’s not as careful as I am. Maybe I’m drawn to Liz’s motivation to be judicious about who she loves or who she befriends.  Yet, it’s her soft spot, her sympathy for Rich, that ultimately gets her into trouble. She’s certainly not heroic, but she is human as well as strong in some unrealized ways.

I struggled most with the narrator in “Buried”. The genesis of this story was grounded in some personal experience in the construction industry. So, I had some firsthand experience with the logistics of housing during the start of the fracking boom in North Dakota. But I wouldn’t have made the choices the narrator makes. Certainly, her love and loyalty to her brother is more understandable. At the same time, I like the gritty action scenes that came out in that piece.

Certainly the high point was the phone call from the editor Mike Czyzniejewski to say I’d won the fiction prize. Then it was telling friends and family. I also enjoyed revisiting characters while making small edits to the galley.

The lows for this book were the amount of times I was a finalist for fiction prizes at a number of contests. I won’t give you the number here, but it’s pretty substantial.

I think it’s “Write what you’d like to read.” This always seems like the most straightforward advice. I think I’ve reached the other incarnation of this which is “Why am I writing this?” I feel like in the face of our contemporary political system and culture, this is something I constantly say to myself now. It usually forces me to drop any pretense and write something that really means something to me.

All these stories went through several iterations where I was trying to uncover what they were actually about. “Faker” is the story that surprised me the most. I went into it thinking it was about a high school student, Brett, who does not want to work on his dad’s chicken farm because it’s brutal, and his dad isn’t taking care of the waste properly. A lot of these stories have this environmental concern that gets wrapped up in the landscape.

So, he is thinking about how he might make an anonymous tip and trigger an unscheduled inspection of the farm. But as the characters took on a life of their own, it began to be about this young guy who has cheated on his girlfriend. The girlfriend has a  fantasy of taking revenge, which she begins to act on as the story progresses. And the boyfriend tries to figure out how likely it is that she’ll enact these plans.

What surprised me about this story is how scary it is. A lot of characters in this book struggle to make the right decision. But Zoe is having some strong emotions absent any impulse control. And, I think many of us remember what it’s like to be an impulsive teenager. But this story deals in extremes.

Most of these stories also have this subtext of how identity is formed by film and TV. So, because characters spend so much time watching visual media, their only point of reference is this shared experience with TV / film. But, it’s double-edged because they don’t form their own identity in a more meaningful way. And so that’s why the main character at the end of “Faker” asks Amy about their shared experience in the state parks.

The subtext of identity being formed by TV and film leads to moments of absurdity. And one challenge for me, when dealing with dark subject matter, is to balance the gallows humor with respect for the character’s circumstances.

I would like to talk a little more about the theme of “life after trauma” in this book. There are a lot of people walking around with some level of trauma. Many deal with it differently. Some have buried it, put it in the past, or have sought professional help. I’m interested in highlighting the perspectives that come after trauma, however messy they may be. I feel that there’s hope and optimism in those voices.

In “Werewolf DNA” there’s a lot of cataloguing of Chicago cuisine as characters have tension-filled business lunches. I was picturing Fulton Market as the setting. So, in association with this book, I would recommend upscale comfort food, which Chicago is great for -- the inspired street taco or the booze-infused donut. Any of the Stephanie Izard restaurants are amazing.

But when I’m making food for friends, I return to this recipe below. So, let’s imagine we’re meeting for book club. Here’s my toffee.

This recipe is adapted from Smitten Kitchen’s Coffee Toffee Recipe

Toast the walnuts. Chop finely and set aside.

In a medium heavy saucepan add the butter, brown sugar, white sugar, molasses, and ½ the salt. Use a candy thermometer. Ideally, clip it to the pan. Do not have small children around. Watch out for your pet. Use a seriously protective hot pad of the mitten persuasion to hold the handle of the pan. This brew has to get up to 300 F. And, you can’t skip that, otherwise it won’t crack or have the right consistency.

As it heats up, it gets a little frothy, so whisk it. I whisk continually, and that works well.

Pour it immediately onto a parchment covered baking sheet and spread evenly with a spatula. Sprinkle peanut butter chips and let them melt. Spread the melted chips evenly and lightly salt. You know the drill. Add that dark chocolate. I pop the whole thing in the oven at 200 for five minutes. Spread the dark chocolate evenly. Sprinkle with walnuts.

I let it sit overnight. Need to be someplace ASAP? Put it in the refrigerator. Just be aware that chocolate can get weird if it doesn’t have a chance to rest comfortably--just like us.

READ MORE ABOUT THIS PUBLISHER AND THIS BOOK: Moon City Press

ORDER THIS BOOK FOR YOUR OWN TBR SHELF: University of Arkansas Press

READ A STORY FROM THIS BOOK: Horribilis - Electric Literature; May 2019