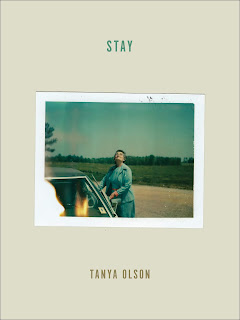 Stay is a book that considers what it costs to remain in an identity, belief, or geographic area, as well as what it costs to leave those things. The poems use American songs and stories to think about these costs on a national and personal level.

Which which poem/s gave you the most trouble, and why?

Someday I’ll Love Ocean Vuong was the poem I probably put the most hours into; it’s different in structure and tone for me. I usually don’t do “assignment” poems or try to write a particular kind of poem, but for this poem I wanted to try to write a Someday I’ll Love. . . poem. I had heard both Ocean and Roger Reeves read their versions of this (in response to a Frank O’Hara line) and wanted to see what it would be like for someone other than a man to write one. I was really pleased that it ended up both reflecting that kind of poem while not adhering to previous versions. Then it had all those couplets, which seemed correct for the poem, but drove me crazy. Every time I changed 1 line, it would often mean I had to work on everything after. While I might make some reading adjustments to it, thank god it’s finally in a stable version in print.

When I was writing my first book, I had no idea I was writing a book. I was just writing a bunch of poems and then had to, years later, look back and try to figure out what they all had in common and how they held together. Stay was a million times easier. I knew I wanted to end up with a book and I knew it was all about staying or leaving in some way. While I still had to put together an order, the whole process felt much simpler.

Your poem should please you. Your poem doesn’t have to please other poets or your writing group or your teacher or your audience. It has to feel right/done/accurate to you and no one else.

After hearing Timothy Donnelly and Tim Seibles each (at different readings) read 1 long poem as a whole reading, I knew I wanted to try making a poem that sweeping and ambitious. While it didn’t quite end up to their works, I loved the way txt me im board ended up as the center poem, the poem you work your way to and away from. It became a poem I could organize the book around.

I think a lot about who is going to hear/read these poems and what they will get from them. My ideal reader is unaffiliated with a university; they feel left out of or adjacent to power. They are surprised to hear/see themselves reflected in art but find the experience meaningful. They like to make things and clap at the end of poems because they know it is hard to make anything that works well.

The Horseshoe makes an appearance in Bobby Bare. It’s one of those great American sandwiches you get at a local joint, and if you ever find yourself in the flat corn and soybean fields of central Illinois, I highly recommend one. The cheese sauce in this one looks a little high-faluting, but I like that someone in the comments recommends the best places to get one. It’s probably more of an eaten-out than a made-at-home thing.

READ MORE ABOUT THIS AUTHOR/BOOK: https://www.tanyaolson.com/

ORDER THIS BOOK FOR YOUR OWN TBR  SHELF: https://www.yesyesbooks.com/product-page/stay-by-tanya-olson