Sometimes I have very brilliant ideas, and if I do say so, this might be my very brilliantiest! Two lovely friends each have published a new book, one a collection of linked stories, the other a novel in stories…so who better to conduct their own interview about the ins and outs of linkage, stories, triptychs, “no-fault fiction,” and how to balance the promotion/writing/life.

OUR WRITERS
Rachel Hall’s collection of linked stories, Heirlooms, was awarded the BkMk Press 2015 G.S. Sharat Chandra prize, selected by Marge Piercy. Her stories and essays have appeared in a number of journals and anthologies, including Bellingham Review, Crab Orchard Review, Gettysburg Review, Lilith, New Letters, and Water~Stone. In addition, she has received awards and honors from publications such as Lilith and Glimmer Train, and New Letters and from the Bread Loaf Writer’s Conference, Saltonstall Foundation for the Arts, as well as Ragdale and the Ox-Bow School of the Arts where portions of Heirlooms were written. She is Professor of English at the State University of New York-Geneseo.
Michelle Brafman’s short fiction and essays have appeared in Slate, The Washington Post, Tablet, Lilith Magazine, the minnesota review, the Los Angeles Review of Books, and numerous other publications. Her debut novel, Washing the Dead, was published by Prospect Park Books in April of 2015, and her second book, Bertrand Court, a novel in stories, is set in Washington, D.C. and was published in September of 2016. She has taught creative writing at The Johns Hopkins MA in Writing Program, the George Washington University, and in smaller workshops throughout the Washington, D.C. area. In 2003, she founded Yeah Write, a writing coaching business.

THEIR FABULOUS BOOKS!
Heirlooms (by Rachel Hall) begins in the French seaside city of Saint-Malo, in 1940, and ends in the American Midwest in 1989. In this collection of linked stories, the war reverberates through four generations of a Jewish family. Inspired by the author’s family stories as well as extensive research, Heirlooms explores assumptions about love, duty, memory and truth. More information: http://www.rachelhall.org/
Bertrand Court (by Michelle Brafman) intertwines seventeen luminous narratives about the secrets of a cast of politicos, filmmakers, housewives, real es­tate brokers, and consultants, all tied to a suburban Washington, D.C. cul-de-sac. Linked through bloodlines and grocery lines, they respond to life’s bruises by grabbing power, sex, or the family silver. As they atone and forgive, they unmask the love and truth that hop white picket fences. More information: http://www.michellebrafman.com/ 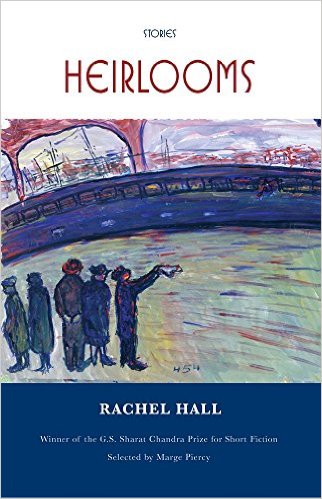